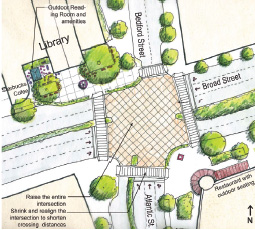 Stamford is a suburban edge city in the New York metropolitan region. It has some wonderful existing assets, including quality restaurants, thousands of residents and employees within walking distance of its downtown, and the second busiest train station in the entire Metro- North commuter railroad system. The challenge is how to better connect these assets with good urban design and public space management to create a safe and welcoming environment to people who live, work and visit Stamford.

Towards this end, and at the urging of the Royal Bank of Scotland who opened a new office building in Stamford in 2009, the City of Stamford hired PPS to examine the pedestrian environment around the train station and the downtown core. PPS used time-lapse photography and behavioral observation to study usage patterns and conditions relevant to improving the pedestrian experience in Stamford, and hosted a community Placemaking workshop to engage stakeholders in planning pedestrian and public space enhancements.

Based on these efforts, PPS proposed short- and long-term recommendations, including traffic calming, public amenities and architectural strategies, to help the City of Stamford, the local business improvement district and major local employers plan improvements to the public realm. Specific recommendations included improved wayfinding and informational signage, enhanced pedestrian infrastructure at heavily trafficked intersections, infill redevelopment, and retail strategies to transform the transit center into a full-service destination for the community. A crucial component of the PPS recommendations involved a management and programming strategy that aimed to support positive outdoor activity during all parts of the day, week and year.

A major challenge of the project was addressing the area around the train station, which is located under the elevated Interstate 95 freeway. The streets surrounding the facility are designed to maximize vehicle throughput despite major pedestrian volumes moving between the station and the downtown; this area was communicating that Stamford is a city for cars, not people. To improve this image, PPS recommended narrowing the at-grade freeway access roads, using art and lighting to improve the walk below the I-95 structure, and relocating vehicular parking in front of the station to make room for convenience retail and informational kiosks.

The City of Stamford has already implemented a number of shortterm intersection improvements around this area and is studying the feasibility of these concepts for the train station. 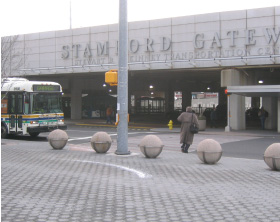