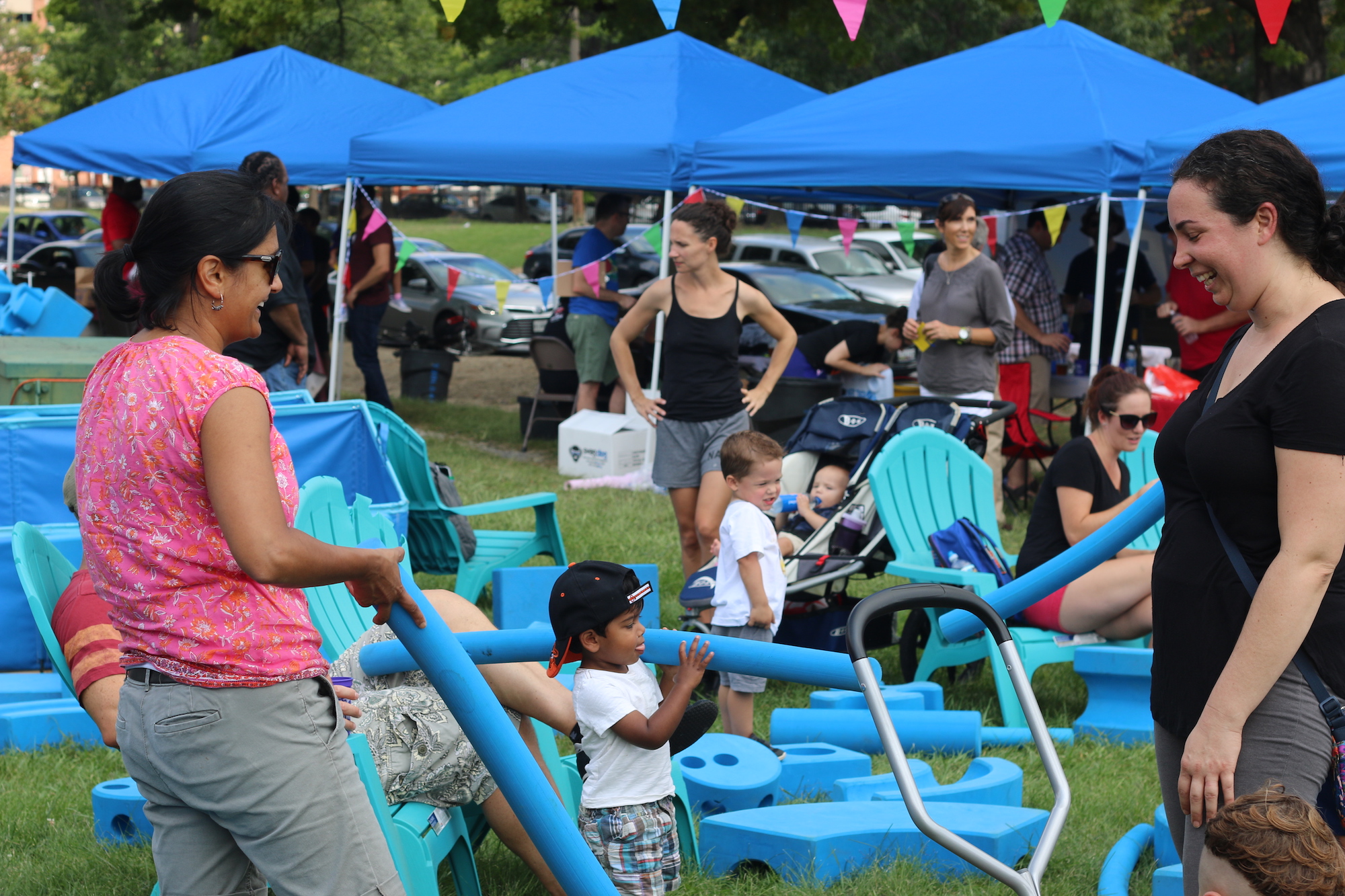 Pigtown Main Street is a non-profit organization dedicated to the revitalization of the Washington Boulevard corridor in West Baltimore. The corridor is a six-lane divided highway, and the public spaces around it were neglected and trash-strewn. The Washington Boulevard Gateway Project was selected by Main Street America as one of the ten projects for the Edward Jones Placemaking on Main Street Crowdfunding Challenge and received $2,500 in matching funds to implement a “lighter, quicker, cheaper” (LQC) project. In May 2017, following a session on Placemaking during Main Street America’s Main Street Now Conference in Pittsburgh, Ben Hyman, Executive Director, reached out to Project for Public Spaces to start making changes to the corridor using community input. The Pigtown Gateway Project began, with aims of improving the local economy, activating public spaces, and engaging community residents.

In July 2017, PPS conducted a site visit to the West Baltimore Pigtown neighborhood in order to meet key stakeholders and conduct a tour of the East Gateway, assessing the site and its potential for a placemaking intervention. PPS took photos, documented the site’s conditions, discussed ownership and management strategies of the site, and facilitated an online survey. All of this information-gathering gave way to a pop-up LQC place activation. Based on feedback from stakeholders, PPS facilitated a day-long event, beginning with family-friendly activities, and followed by an afternoon adult-friendly party to accompany aRavens/Orioles baseball game. To set up for the parties, Baltimore Department of Transportation (DOT) used cones to create a curb extension and shortened crosswalk and hosted a tent with kid-friendly pedestrian safety activities. PPS created a site activation plan for a temporary, pop-up day of activities which included a temporary intersection redesign (based on the 2016 Sustainable Cities Design Academy sketch) as well as areas for children’s activities, seating, food and drink, and opportunities for the community to approach  PPS and DOT with new ideas.

On Sunday, September 17, 2017, volunteers, PPS staff, and Pigtown Main Street staff set up tents and tables for vendors, put up flyers, hung banners, and assisted with DOT and vendor set-up in the space. A steady flow of visitors attended the activation throughout its duration. The area buzzed with family activity and the children’s area on the lawn was filled with kids playing with oversized foam blocks. Meanwhile, adults were able to enjoy food and beer at the standing tables located on the S. Martin Luther King Jr. Blvd sidewalk. The highlight of the event was a marching band, identified by PPS and Pigtown Main Street during the stakeholders’ interviews, that played and marched around the perimeter of the site. PPS-facilitated Dot Boards were a fun way for people to give feedback on the event and share their vision for the activation site beyond the event. The pop-up activation began the process of reclaiming the space, transforming it from vacant lot into a destination. Approximately fifty two percent of attendees even reported in an intercept survey that they perceived it as a safer place after attending the parties. In the interest of using the event to inform longer-term plans, the first activation was a key demonstration of the demand for places to sit, play, eat,and enjoy programming next to a mixed-use development. 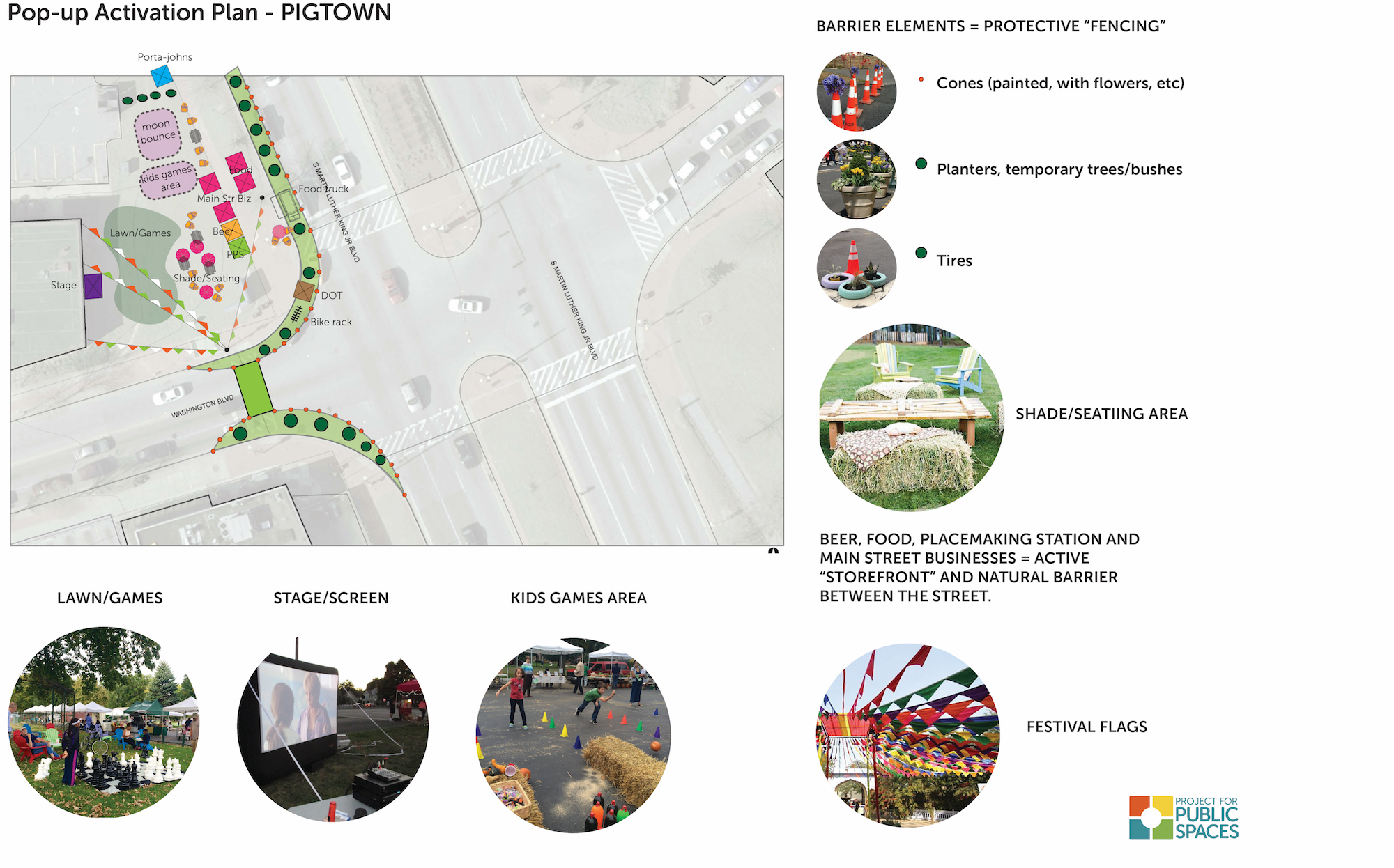