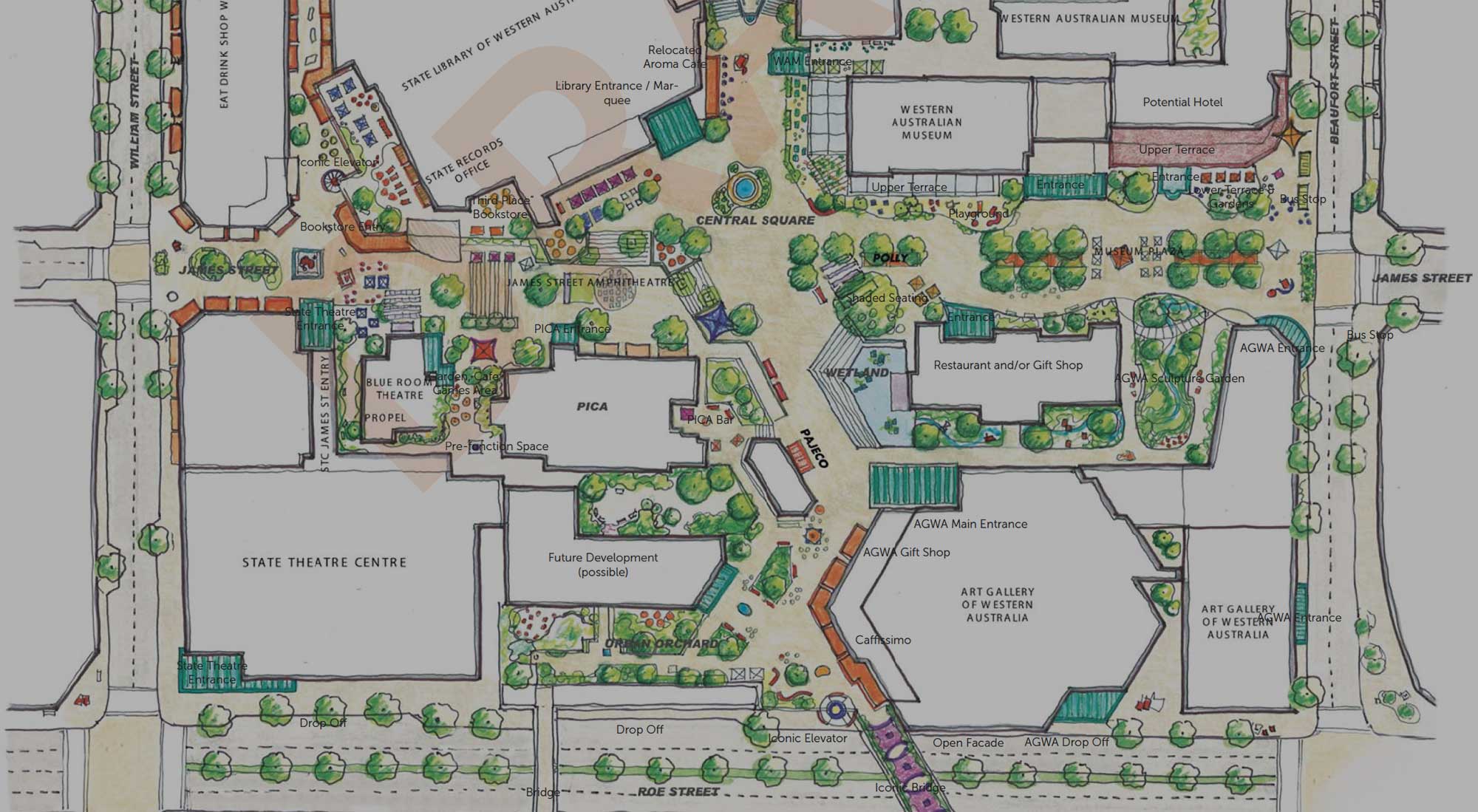 The Perth Cultural Centre (PCC) is a group of institutions located between Perth’s city center and the Northbridge retail district. It has a contemporary art institute, art galleries, a state library, and a state theater. The Centre is easily accessible from the Central Railway Station and downtown, across the street from a branch of the City University and a short walk from the harbor. Although the Cultural Centre had a critical mass of prominent arts and educational institutions, adjacent to the main railway station, it was not functioning at full capacity until the Perth Redevelopment Authority (EPRA) collaborated with PPS, the local community, and the institutions to revamp the district.

Despite the fact that many people passed by the Cutural Centre, they were usually on the way to somewhere else. The area felt as if it had no “heart,” and the cultural institutions were not working together. That all changed in 2009 when Perth’s Metropolitan Redevelopment Authority (MRA) embarked on a journey to make their Cultural Centre into a valued place. The goal was to create a destination that would attract people day and evening, weekdays and weekends, in every season. The force behind this transformation was MRA director Tony Morgan and his talented staff, who were committed to a planning approach very different from what the MRA had used for years. Morgan told the designers not to put pen to paper until they understood how the space functioned.

The first step was to evaluate the space and assess how areas next to each institution functioned in order to understand what would work at each specific place. MRA teamed up with staff at  the various institutions to test ideas for improving and managing the spaces.

The second change included simple measures like adding more seating and shade to outdoor spaces, painting the steps to create informal places to sit during performances, installing free wi-fi and a large screen for projecting movies and digital art. As cultural organizations began to share and implement their own visions, they evolved into a “community of institutions” that functioned as a powerful network of ideas and resources. Soon, a number of more-involved projects started taking shape, including turning a dilapidated fountain into an impressive Native Wetland area, building a multi-sensory play space, and planting an urban orchard and community garden. The Centre also began hosting a variety of public events, ranging from movie screenings and concerts to interactive games on the enormous pop-up screen.

“The area is becoming a popular lunch time ‘hang out’ space...EPRA is continually working with stakeholders and the cultural organizations within the precinct to field new ideas and activities in the space.” –Danijela Simic, EPRA

Over the next two years the group implemented impressive changes to the Centre, which became known in Australia as the “Quick Win” approach—meaning improvements  that could be done quickly, didn’t cost a lot of money and would have a strong impact on how people used the place. This strategy was really powerful, explained MRA Executive Director of Place Management Veronica Jeffery, “[because] people could see their ideas transform into action.”

The MRA encouraged the institutions to offer interactive and creative programming that made use of their exterior public space by accentuating the identity and assets of each institution. For example, The Institute of Contemporary Art, for example, began a series of public outdoor art exhibitions adjacent to their building, including a water-themed installation entitled Appearing Rooms, comprised of sprinklers programmed to randomly rise and fall in a grid-like pattern to simulate walls.

By turning themselves “inside-out,” these organizations realized they were not only widening their impact and audience, they were also breaking down cultural barriers that often separate the “Ivory Tower” from the rest of the community. Soon, major events like the Perth International Arts Festival and Fringe World Festival relocated to the Centre’s grounds.

Today, the MRA now uses what they call “place-maintenance” as their modus operandi: “We believe that by starting with the place,” they explain in their organizational literature, “that we can unlock the potential of an area and encourage local residents and visitors to Perth to engage with our city in new and exciting ways.” The Perth Cultural Centre is a model of a Place-led approach, but also of the remarkable transformation that can happen when a community of institutions, government agencies, and individuals come together to trigger a culture shift. This project was also a catalyst for the evolution of other destinations in Perth, including  the redevelopment of the Waterfront (now called Elizabeth Quay), and the massive Perth City Link project that will reconnect the city’s Central Business District with neighboring Northbridge for the first time in 100 years.

These institutions discovered that through coordinated efforts leveraging the PCC’s surrounding public space, each institution is able to maximize outcomes.

The MRA, working with the community, has fostered meaningful and lasting change in the Perth Cultural Centre.  “Ultimately, the Centre is a public space, and we want everybody to feel comfortable here,” explained Veronica Jeffery. “They should be able to come in and feel like it’s theirs. If they happen to have a cultural experience in the process, that’s even better!”

“We want to turn ourselves inside out and be of the Centre not just in the Centre.” — Western Australia Museum

Transforming a Neglected Square: Bringing Arts and Culture Outside at the Perth Cultural Center 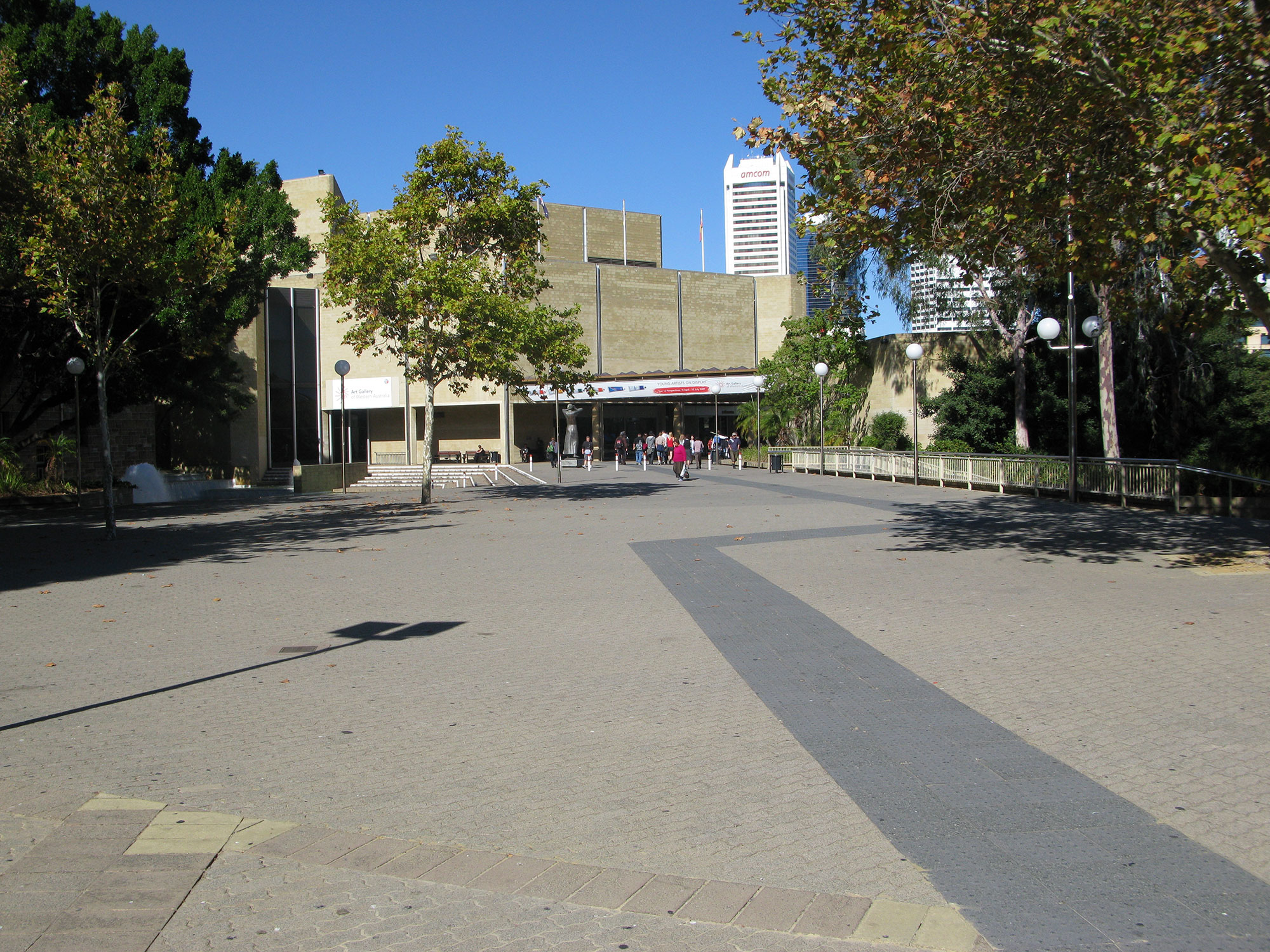 Before: An uncomfortable space that was dominated by concrete, paving and disrepair. 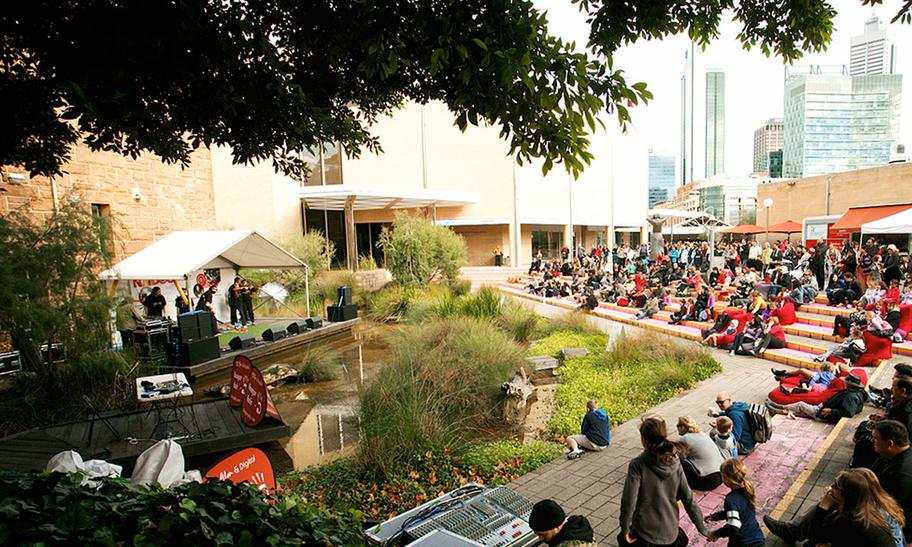 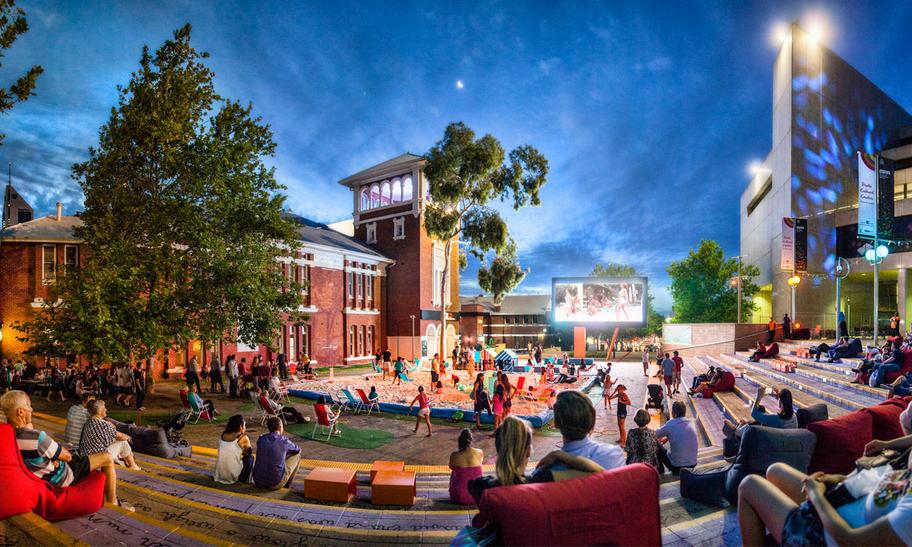 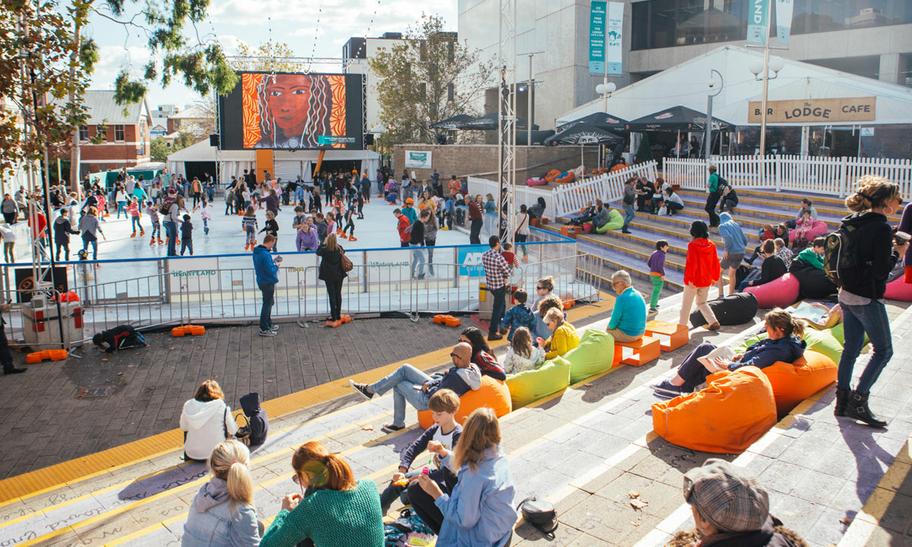