Heart of the Community Grants Program
Learn more about our partnerships

The mixed-use corridor of Myrtle Avenue runs through Fort Greene and Clinton Hill, two historically African American neighborhoods experiencing real estate pressure and new development. In the past, little attention has been paid to developing a coherent series of public spaces that would provide opportunities for people to come together and businesses to flourish in these neighborhoods.

In early 2007, the Myrtle Avenue Brooklyn Partnership (MABP), the local BID and LDC, invited PPS to develop and facilitate a public process to create ideas for a network of public spaces.

Between 2005 and 2007, MABP hosted three public workshops to better understand the perceptions and needs of the residents and businesses they serve. The first workshop helped MABP recognize which places participants felt had positive or negative neighborhood attributes. The next two workshops, facilitated by PPS, focused on four specific sites along the avenue that together could create a corridor of great public spaces. The four sections were: the service road along Myrtle Avenue, the intersections of Myrtle and Clinton Avenues and Myrtle and Vanderbilt Avenues, and the street side of the Ingersol and Walt Whitman Public Houses facing Fort Greene Park.

The Service Road: Designed to primarily accommodate automobiles, the service road presents an opportunity to balance the needs of vehicles with the needs of other users. PPS created four concepts for enhancing the service road, all of which include widened sidewalks, curb extensions and a new public plaza.

Intersection of Myrtle and Vanderbilt Avenues: Vanderbilt Auto Care and Exxon Station, an important business providing gas, services and convenience to residents, is located at this intersection. A bustling and well maintained site, the service station has the potential to enhance its image and maximize its corner location through a series of streetscape and storefront improvements. PPS identified a strategy to improve pedestrian safety by changing the curb cuts and adding streetscape improvements such as trees and planting beds.

Intersection of Myrtle and Clinton Avenues: This intersection at the center of Myrtle Avenue’s business activity is an important crossroads of history, commerce, culture, transportation and architecture, which has the potential to be a great public space. Short-term improvements include awnings for storefronts, artwork in windows, trees and plantings, and the use of parking lots on the weekends for events and community gatherings. In the long term PPS suggests redesigning the crosswalks to improve image and safety, increasing street lighting, extending sidewalks to create more public space and eventually replacing the parking lots with small urban parks.

Ingersol and Walt Whitman Public Houses: Bordering a beautiful urban park, this complex of public houses contains an active, engaged community of families and seniors. Residents love their access to downtown Brooklyn and transportation as well as their proximity to Fort Greene Park; however, they feel unsafe and unconnected to the surrounding community. Participants in the workshop want to see a variety of amenities and physical improvements made for safety and attractiveness, as well as increased programming and events that would connect them to the wider community of Fort Greene. 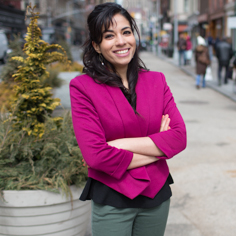 Project for Public Spaces is launching its Portals to Places initiative to create transit facilities and a public realm that support riders.