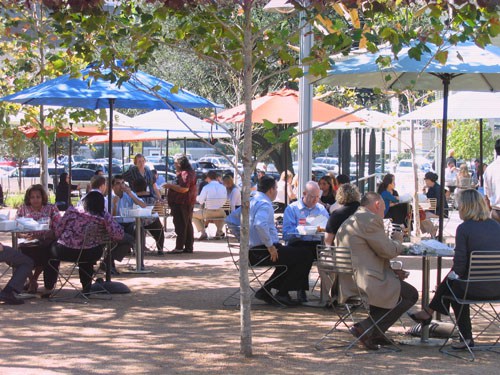 In 2007, Project for Public Spaces was called on to guide the future development of Market Square Park, an underused park in Houston’s Historic District. PPS began a community-driven process to gather information on the neighborhood and on the existing conditions of Market Square itself.

Two central issues to the project were how to acknowledge the historic importance of the site as Houston’s first public space and site of several City Halls until 1960, and how to accommodate a number of site-specific artworks that were created as part of the previous design.

PPS worked with a number of those artists to incorporate their works (and in some cases update the works) into the new square and the designer (Lauren Griffith Associates) took the footprint of the City Hall for the site of the main lawn. According to local restaurant owner Jamie Mize, “With the renovation of Market Square Park, we will further the goal of helping create a true urban neighborhood in the north end of downtown and encourage property owners in the area to develop their properties.”

PPS conducted a visioning process that resulted in a concept plan that was to make Market Square Park a place that would anchor the district and spur further revitalization – creating a vibrant livable downtown for Houston has been an ongoing effort of the city, with PPS as a partner on several parks and square including Discovery Green and Emancipation Park.

Market Square reopened in the Fall of 2010 and lives up in many ways to the vision to create a magnet space that would increase the number of visitors to the district and improve the desirability of downtown as a place to live. Whereas for many years Market Square had been a lackluster and unused green space (with no sign of a market), it now bustles at lunchtime with a new Greek café, performances, shaded seating, a water feature, and bike racks. A large dog run also attracts residents who have quickly adopted the park as their main community space. PPS also outlined dynamic programming for the park including rotating events such as farmers markets and holiday markets, movies, exercise classes, a library kiosk, as well as play areas for children.

Houston Market Square celebrated its Grand Opening in the fall of 2010.  In the mayor’s introduction, she called Houston Market Square “…the perfect park: it has history, it has green space, it has food, it has places for the pets, it has places for kids to play, it has art- this is going to be the heart of this area- and the events that we do here are going to be that heart beat!” 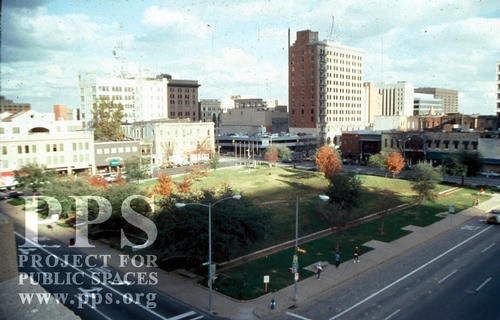 Before image of Houston Market Square 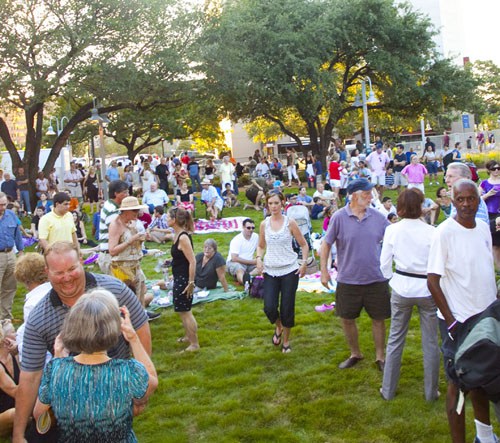 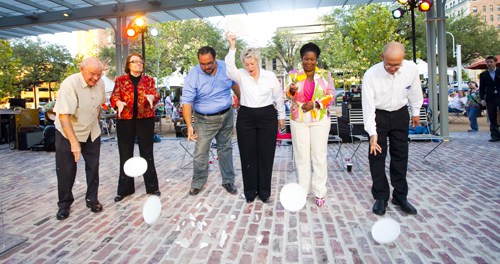