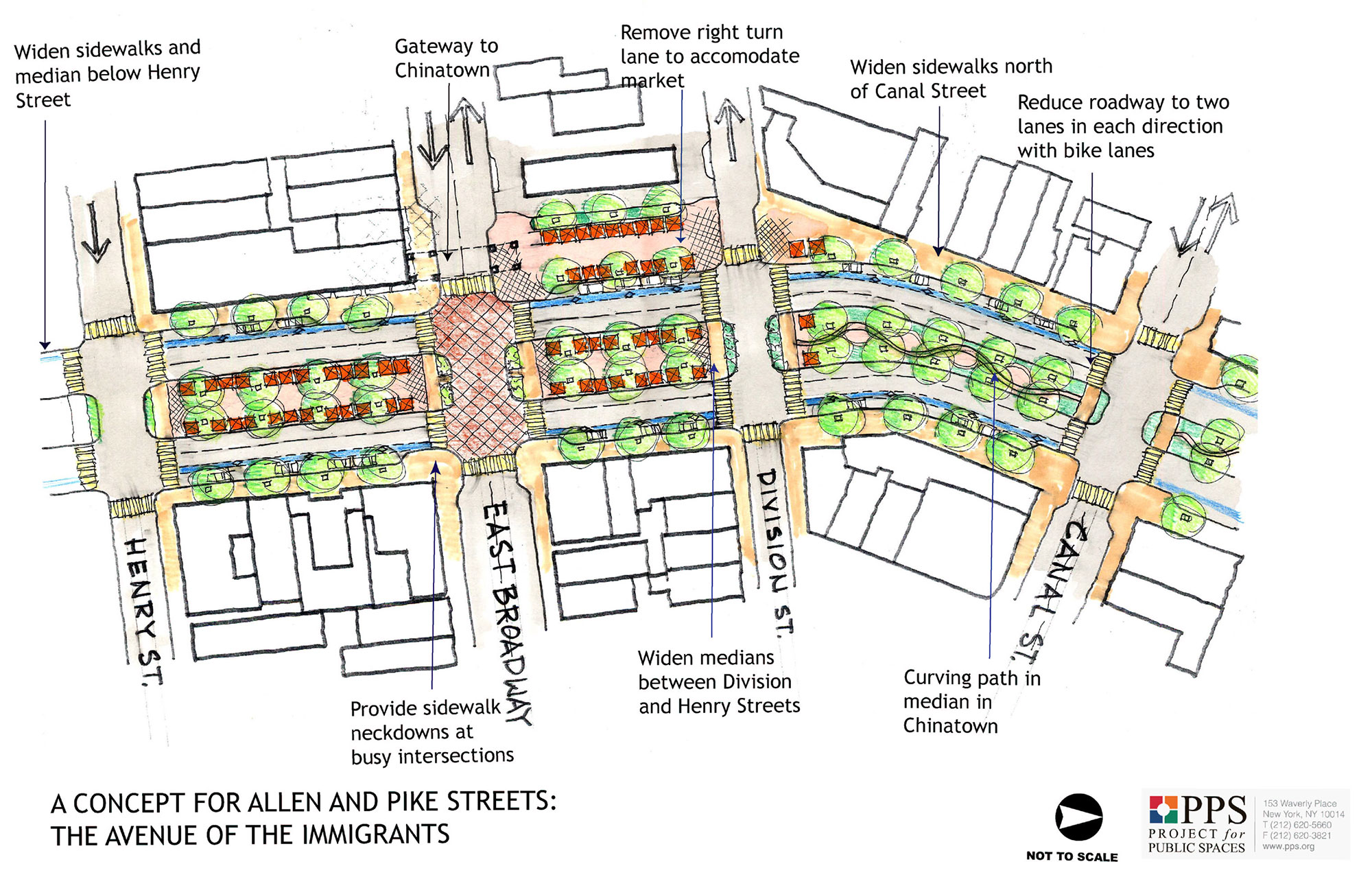 A Vision for Allen and Pike Streets

Community groups and neighborhood stakeholders are united in their desire and enthusiasm to see Allen and Pike Streets become a beautiful, green boulevard that knits together the disparate communities of the Lower East Side. Although everyone recognizes that the streets and their potentially verdant medians have become deteriorated and desolate, they envision a new future for the streets as an "Avenue of the Immigrants." While the streets now act as a barrier between Chinatown and the Lower East Side, creating a wide "no-man's-land" between neighborhoods, the community imagines them transformed into a pedestrian-friendly "destination" -- a stunning commercial boulevard, renowned for its beauty and historical significance, in the heart of a revitalized Lower East Side, and leading to a magnificent waterfront. They describe a place where residents and visitors would enjoy strolling, shopping, attending festivals and shopping at markets, and just passing the time with neighbors. The many community groups involved in this project expressed a willingness to partner with the City to achieve this vision.

UNRAP and PPS held three workshops with a diverse group of residents and stakeholders on Allen and Pike Streets, including representatives of Community Board 3, MTA, DOT and Rutgers Houses. The discussion focused on the assets and liabilities of the streets, short-term and long-term improvements, and an overall vision for what the streets could become. The second workshop, which included participants from the first workshop as well as more residents, community board members, and representatives from the NYC Department of Transportation and Parks Department, involved an on-site evaluation of specific blocks and intersections on Allen and Pike Streets. A third workshop was held with residents from a NYCHA housing on Allen Street.

The study also involved meetings with several New York City agencies, including the Department of Transportation, the Parks Department, the New York Metropolitan Transportation Council, and NYC Transit. Discussions with the representatives of these organizations were focused on the agencies' plans for the area, their concerns, and the feasibility of various improvements. The study also looked at the waterfront, and recognized the importance of this key, if neglected, amenity to the success of a revitalized Allen/Pike Street. Connections to the waterfront, especially to and from a new esplanade and park being planned by the city, are critical and will merit further study.