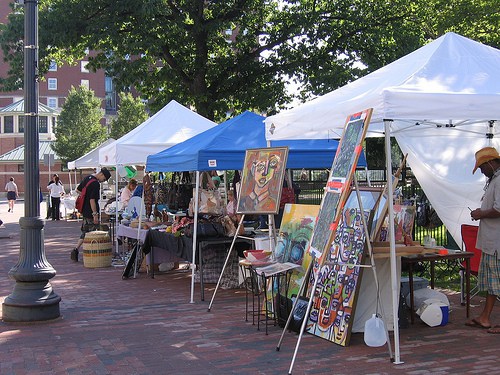 Market at Kennedy Plaza. Photo by Jef Nikerson via Flickr.

Kennedy Plaza, in the heart of downtown Providence, was once the central market square for the city and region. Over the past several decades, however, it has become dominated and defined by traffic and crime. Surrounded by City Hall, an historic train station, a federal courthouse, a grand hotel and private business towers, Kennedy Plaza has potential to be a great public space, as well as a major transportation hub.

PPS was hired by a Greater Kennedy Plaza Working Group, a collection of committed civic leaders, to help transform Kennedy Plaza into a lively square that serves the community and drives the culture, creativity and identity of the city.

After meeting with key area stakeholders to design and initiate a public process, PPS held a Placemaking workshop, attended by over 130 participants, to brainstorm short- and long-term improvements to enliven the plaza and connect it to neighboring destinations. Drawing from local input, PPS developed a series of recommendations that included integrating the various parts of Kennedy Plaza, adding amenities and frequent activities, and engaging local businesses to further the vision for the square.

Building on PPS’ recommendations, the Greater Kennedy Plaza Working Group immediately implemented a lively summer programming schedule, including Public Square Tuesdays (where local nonprofits showcase their work), Market Bazaar Thursdays (where local vendors sell food, crafts, and antiques), Farmers’ Market Fridays, and Rhythm and Soul Sundays (with performances from local theater groups and DJs). In the winter months, the existing ice skating rink was complemented with cultural festivals to keep the square busy. The Working Group has also installed seating in the park and made other small scale landscape improvements.

These efforts have been very well received by the press and local citizens, who have attended the new events in significant numbers.

Next steps in the improvement of Kennedy Plaza, both physically and in the mind of local residents, include the creation of a more long-term programming plan, a sustainable management strategy, and a larger re-design effort. More recently, funded by a grant from Southwest Airlines Heart of the Community Program, PPS worked with DPPC on the design and implementation of the Imagination Center, a dynamic anchor for programming in Burnside Park.

As Providence Business News reports, as of July 2011, "Rhode Island has been awarded a $200,000 “Our Town” Grant to help upgrade Kennedy Plaza and make it a livelier center of arts and culture, the state’s congressional delegation announced Tuesday. The grant, awarded by the National Endowment for the Arts, will be used to support arts programming and a phase II design initiative for Greater Kennedy Plaza. Transforming the area from a transit hub to a social and cultural destination will help bring more people downtown and provide an economic boost to the city and state,” said the members of the delegation - U.S. Sens. Jack Reed and Sheldon Whitehouse and U.S. Reps. James R. Langevin and David N. Cicilline - in a joint statement." 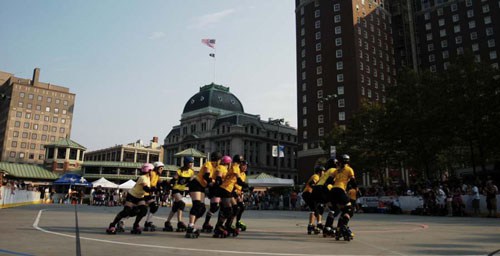 A roller derby in Kennedy Plaza is one of the many new activities that have rejuvinated the square.
Related Articles & Resources