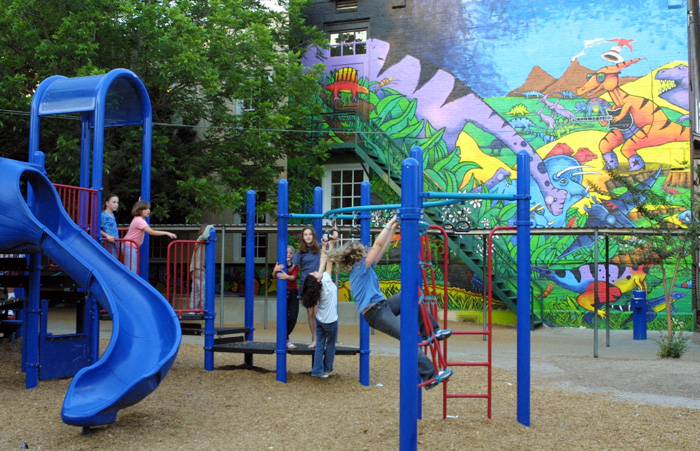 The Travis Elementary School "Dinosaur" Park is successful because it works as both an urban public school playground and as a neighborhood park. The park is located 2.5 miles from HoustonÍs central business district, in an historic neighborhood known for its bungalow-style homes built in the early 1900s. In 1989, parents of preschool children organized to form the "Friends of Travis." This was at a time when "middle-class flight" was one of the major issues of the neighborhood. Young, middle-class families who felt that they had no acceptable place to send their children to school, sold their homes and moved away once children got to be school-aged. The Friends of Travis believed that building a strong neighborhood school would build a strong neighborhood. Pulling together a wide variety of community residents, the Friends of Travis used the creation of this park as a vehicle to rally support around the neighborhood school. The results have been spectacular. Thirteen years after the school was selected by the SPARK School Park program to be the site of a SPARK Park, Travis Elementary School is not only the pride and joy of the Woodland Heights, it is also the heart of the community. Today, Travis Elementary is well known throughout Houston both as the home of the "Dinosaur" park, and also as an excellent public school. Both claims to fame draw students and their families from all over the city. The SPARK Park at Travis acted as a catalyst for community involvement, neighborhood cohesiveness, and the development of a well supported public elementary school. The dinosaur concept for the park originated from Travis students in kindergarten through fifth grade, who were asked to design their "ultimate playground." Their ideas and input are reflected in the unique design of the park involving artistic, botanical, archeological, and geological themes. The park development has been a multiphase undertaking since 1989 that has required and benefited from the sustained interest and support of school, residential, and community members. Major improvements occurred in 1992, 1998, 2002, and 2003. The early phases of development produced the "Travisaurus" dinosaur bone play-structure, a tree-lined jogging path of 'pre-historicÍ bald cypress trees, sunken field area, tricycle path, park benches, and wrought iron fence. Recent additions include an outdoor classroom of boulders, a rock climbing wall, primary play structure, adventure play equipment, four-square court, discovery sandbox, "flintstone village," and the prehistoric mural.

The park is nestled within a turn of the century historic neighborhood that is centrally located and has a view of downtown Houston. Live oak trees, which are predominant in the neighborhood, shade the perimeter sidewalks around three sides of the park. Just inside the fence, an elliptical jogging track, lined by a corridor of bald cypress trees, encircles the playing field. The famous dinosaur sculpture is situated prominently at one end of the playing field and has a strong presence that can easily be seen from all three streets that border the park. The "Dinosaur" park has become a destination of choice for area children, and residents. Though the park is reserved for use by the school during the school day, it is open to the public at all other times. The primary users are the 650 students who attend Travis Elementary School as well as the families and neighbors of all ages who reside in the Woodland Heights. Other park users include curious visitors whoÍve heard of the "Dinosaur" park, or those who have stumbled upon the park and discovered it on their own. When school is not in session, most children and neighbors usually walk or ride bikes, with their families to the playground to meet friends, play or exercise. A wide range of ages enjoy the park. The youngest children dig in the sandbox, ride tricycles and pick clovers in the field. Older children climb on the play structures and play ball games in the field. Teens play basketball, and adults and senior citizens walk or jog around the track.

The "Travisaurus Dinosaur" sculpture in the playground is a landmark for our inner-city neighborhood since the SPARK Park opened in 1992. The new climbing-wall, new play equipment, and colorful prehistoric mural are drawing even more interest as part of the recent upgrades to the park. Teal colored wrought iron benches placed in alcoves along the track under the cypress trees provide seating areas for park goers. The "flintstone village" area is lined with concrete stools and tables to accommodate an entire class of Travis children. Dale "Beans" Barton, a local artist and Travis parent, created and painted the mural that surrounds the "flintstone village" and the 2-story dinosaur mural over the discovery sandbox. The park is maintained by school staff on a daily basis and Travis students are taught to keep the playground clean. The Travis PTA organizes clean-up days in the fall and spring. Parents, children, and neighbors work together to refresh and mulch the flower beds, to resurface the jogging path, and spruce up the field and play areas. These clean-up days are organized before the "Travis Fall Carnival" and the "Woodland Heights Spring Home Tour" to make sure that the playground looks great when the park is used to host these neighborhood events.

Travis Elementary uses the playground area on a daily basis for: recess, PE classes, creative movement classes, and after school program activities. The playground is also used for special school events including: the annual 2nd Grade Hot Air Balloon Launch, annual Travis Field day, Presidential Fitness testing, Jump-Rope for Heart day, and for monthly Kindergarten Outdoor (activity) Centers. During non school hours, the park is used for both residential recreation and civic events. Younger children enjoy playing in the discovery sandbox, sliding and running on the primary play structure, and climbing the dinosaur sculpture. Older children enjoy the climbing-wall, playing in the field and on the courts, and racing or riding on the jogging track. Adults use the park for interacting with their children and other neighbors, jogging or walking on the path, and enjoying the view of downtown from the park benches under the cypress trees. Civic activities include the following annual events: Fall Carnival, the Lights in the Heights Christmas Nighttime Festival, and the Woodland Heights Association Spring Home Tour.

Residents walk or ride to the park on a regular basis after dinner or on the weekends to meet friends and play in the park. The park is a gathering place for those of all ages. Children from diverse backgrounds play, learn, and grow together. Neighbors often bring visiting relatives and friends to the park to show-off the unique dinosaur structure, climbing wall, and artwork of their neighborhood and school.

The saga of the Travis Elementary "dinosaur" park began in 1989 when the newly-formed "Friends of Travis" (organized by future Travis parents, Karla Cisneros and Mary Jo Klosterman) began working with the community to organize neighborhood talent and resources to develop a master plan for the entire campus. Volunteer architects, graphic designers, artists, accountants, planners, engineers, geologists, educators, writers, and a very active group of Travis alumni all came together to lend their expertise. Landscape architect and future Travis parent, Scott Slaney established design priorities and assigned dollar amounts to the dreams. The Woodland Heights community in conjunction with the SPARK School Park organization was involved in designing, planning, and raising approximately $175,000 for the first phase of the Park completed in 1992. The SPARK School Park Program forges collaborations among schools, parents, civic leaders, businesses, and local, state and federal government to create neighborhood parks on public school playgrounds. The huge dinosaur skeleton that forms the focus of the parkÍs play environment was derived from a synthesis of the childrenÍs drawings of their "ultimate" playground and the innovative design of local sculptor Paul Kittleson. Paul Kittleson created the huge dinosaur skeleton and faux archeological dig with student artwork that forms the focus of the parkÍs play environment. The initial phase of the park in 1992 also features a sports field with a shaded jogging track with 87 bald cypress trees and additional live oak trees. The Mary Jo Klosterman Memorial Outdoor Classroom was later added and dedicated to one of the founders of the Friends of Travis who had been a geologist. The community worked together again in 1998 to have a wrought iron fence installed around the playground. In 2001, a "Playground Committee" of concerned parents and teachers was formed when it was brought to the attention of the school that the pre-SPARK Park wooden play structure needed to be replaced. Members of the committee and the community expressed their desire to improve the rest of the park to provide additional improvements envisioned in the original plan. Travis parent and Landscape Architect, Keiji Asakura, expanded on the original plan and worked with the Travis parents to oversee the completion of the renovation and upgrade. The new primary play structure, four square play area, discovery sandbox, prehistoric mural, chin-up bars, monkey bars, parallel bars, bouldering wall and additional wrought iron fencing were added in this renovation project. Funding of the project was provided by a number of sources including: fundraising by the Travis PTA; grants from SPARK School Park non-profit organization, Susan Vaughn Foundation, City Of Houston Neighborhood Matching Grant Program, ExxonMobil, and the Houston Rockets; and donations from Bank of America and the Woodland Heights Civic Association. 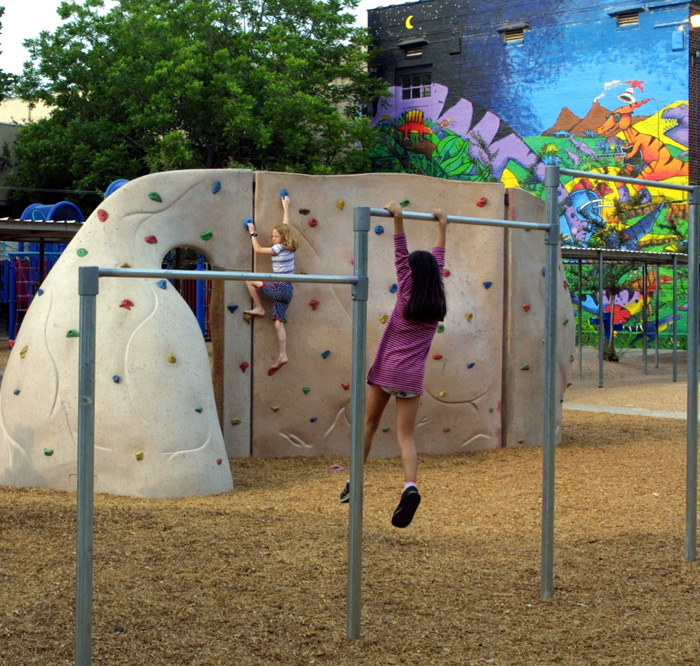 Climbing on the new playground equipment. 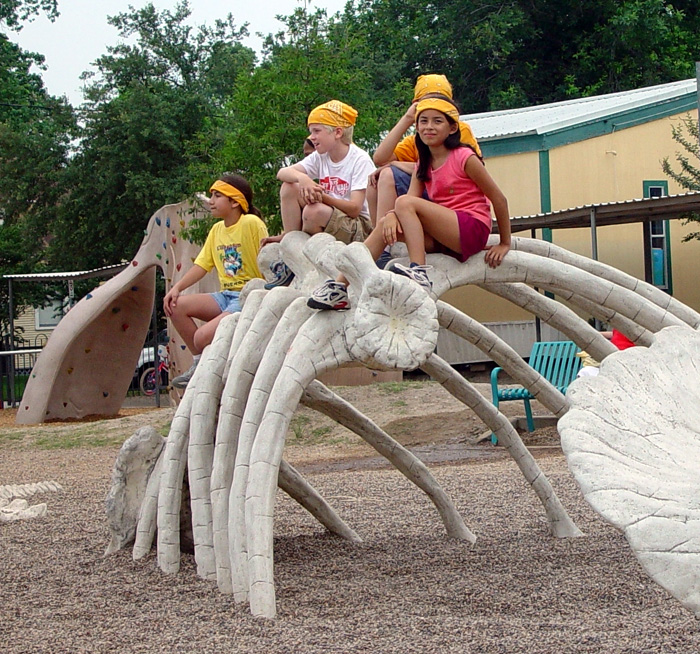 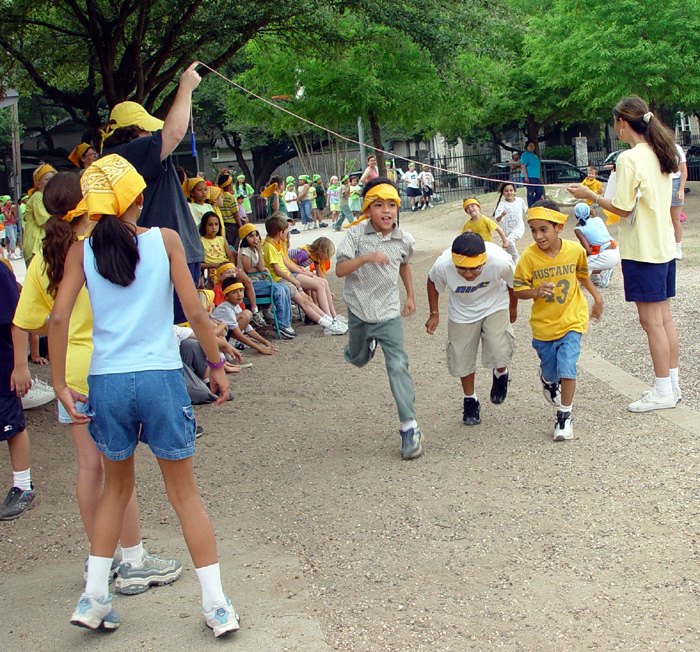 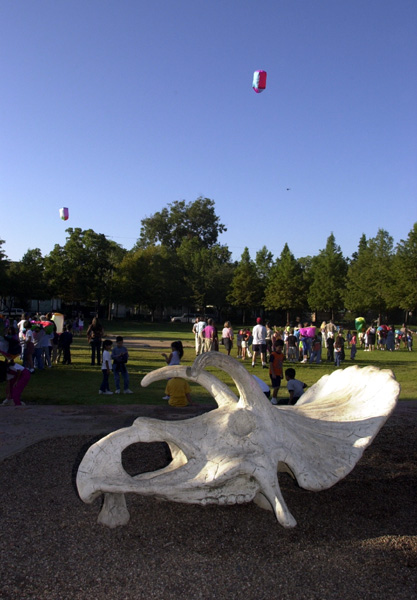 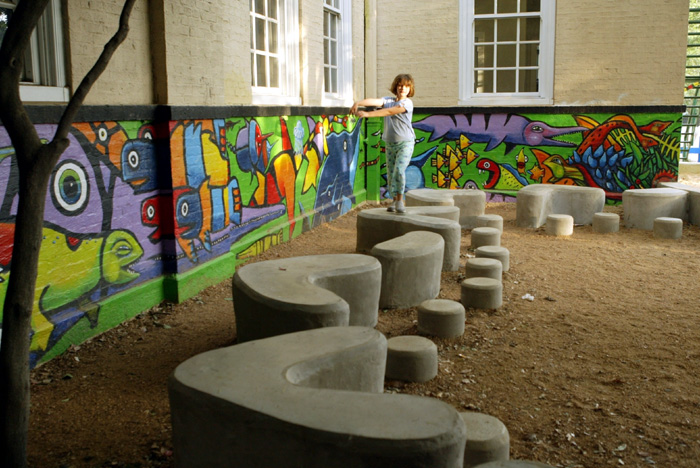 Dancing on the tables in the "flintstone village." 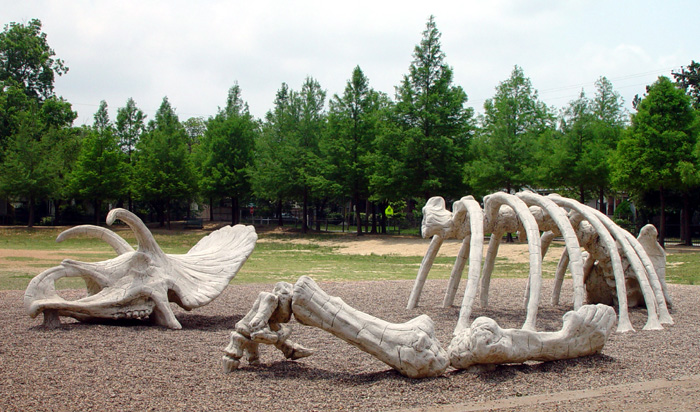 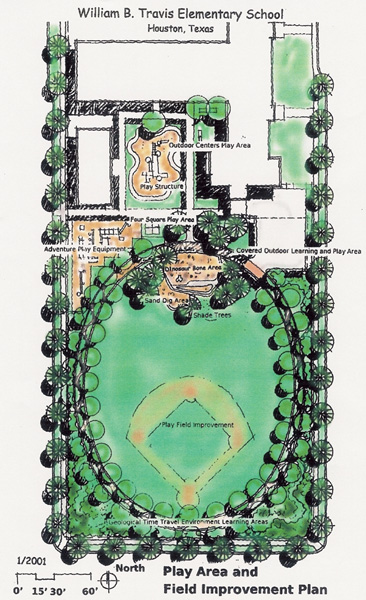