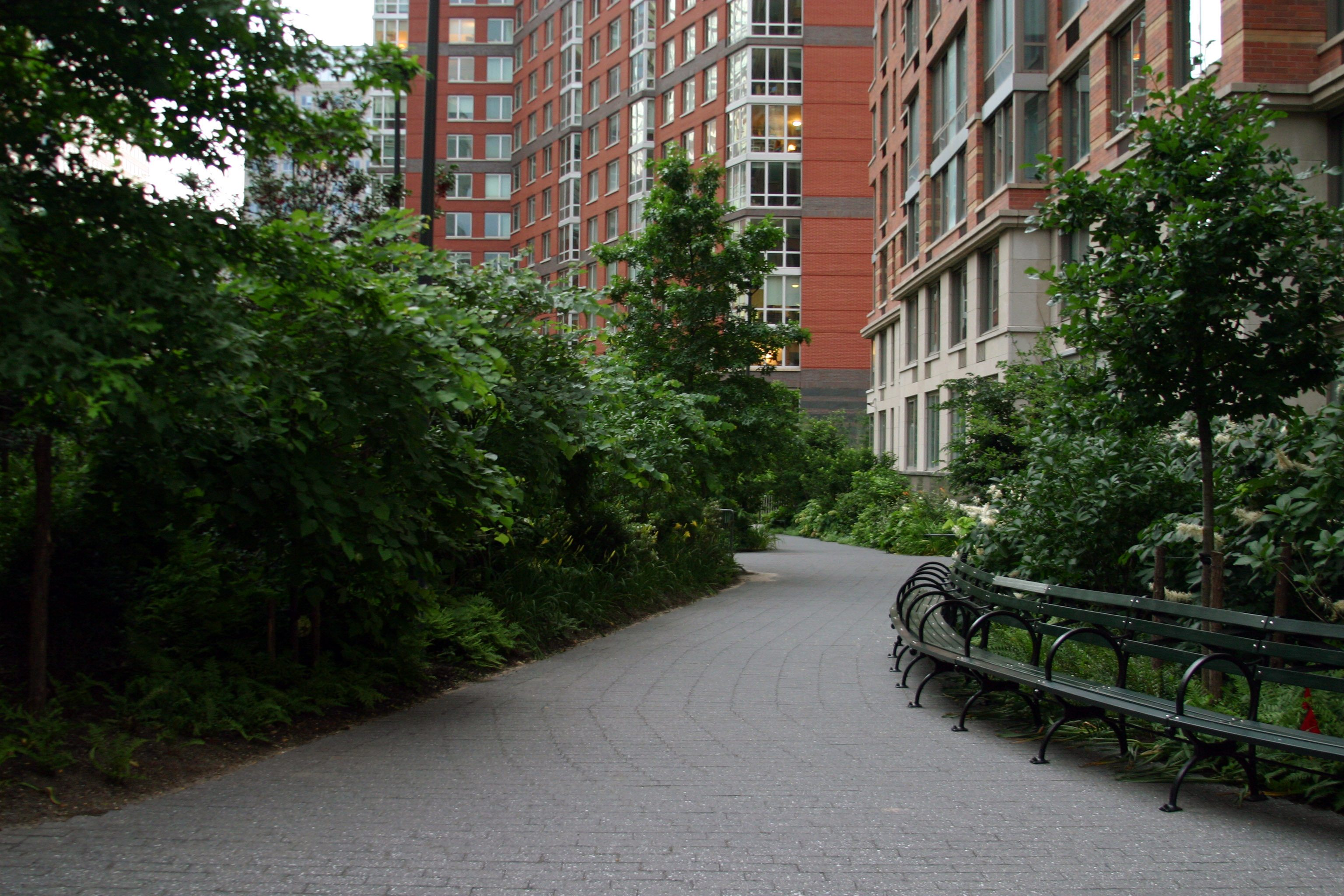 A $17 Million public park that serves primarily as a private courtyard arboretum to the surrounding high-rise development.

A beautiful and serene naturalistic experience, this park effectively mimics a Northeast forest. Material and plant selection are extremely thoughtful and attractive. But despite the landscape mastery that this park showcases, there is a very basic problem: Almost any other public use of this area would serve New York better than Teardrop Park. Serene as it is, there is almost nothing to do in this park and nothing to attract the people who might use it. It functions mostly as a private park for nearby building residents, and even these few users would be better served by a multitude of other uses instead of Teardrop Park. Besides the security guard, there were 3 people in the park on a beautiful July evening (about 7PM), and two of them were engaged in intimate physical activity.

Indeed, the park is not inviting because its spaces feel threatening--many parts are obscured from view as you experience it, and at every turn you might run into something unexpected. There is little to reward the few brave souls who do explore the park: Most turns reveal nothing more than shrubs and another mysterious turn. Other than the slide, the only thing you can do here is sit on an isolated patch of grass, or on some of the lonely benches that face the confined pathways and passive building walls. The real mystery is how the landscape architect expected humans to participate in this space _ or perhaps they hoped to deter any use. If that is they case, they were certainly successful.

The park's success diverges signifcanlty from the adjacent Rockefeller Park which is perhaps the best used and best loved section of Battery Park, with the broadest range of users.

Interviewing the security guard, I learned that teardrop park is basically a safe park, but that it usually gets very little use. The only area that gets regular use is the slide, which only gets used by children who most likely live in adjacent buildings. According to her, this activity is restricted from 3-6PM. She noted that the isolated grassy lawn area is almost never used, and informed us that most complaints come from the building residents, who complain that they cannot walk their dogs there.

Evaluating within the narrow solution set that defines Teardrop Park, this park perhaps deserves some of the praise it has received. This solution set is actually quite appealing to many and I would say much more appealing than the even narrower solution sets applied by most of the other famous landscape architects that have come out the Harvard Graduate School of Design. The extraordinary skills, knowledge base and vision of this firm (Michael Van Valkenburgh Associates) should and could be used very effectively in many parks around the world, but allowing this rather narrow solution set to dominate a park environment is doing a major disservice to the communities they are meant to serve _ even if the community they are most concerned about serving is their own landscape architecture community.

Hard to find, hard to see into, and unfriendly to navigate, this is not a park that was designed to encourage pedestrian access.

While perhaps aesthetically attractive in its attempt to mimic a Hudson Valley setting, it chooses not to mimic the aspects of urban parks that attract human beings and make them feel comfortable.

The slide is a fun use but only for a small part of the population and it is isolated from other uses. Otherwise, besides sitting, there are not many other things you will find people doing in this park.

The only social behavior this park facilitates would be private or illicit behavior. Almost all locations are secluded. Decidedly private, this is not a park that you go to to participate constructively in public.

"The dedication of Teardrop Park in Battery Park City is part of our vision for rebuilding lower Manhattan as a true mixed use community," said Governor George E. Pataki. "This park adds more green space to downtown and is another great example of 'greenÍ building and environmentally-sensitive planning. With its rolling hills and use of native stone throughout the site, Teardrop Park will certainly be one of the most visited green spaces in New York City. I want to congratulate James Gill, Tim Carey and Michael Van Valkenburgh and thank them for giving us this wonderful oasis."

Over 1,900 tons of bluestone, granite and limestone was used in the construction of Teardrop, all of it obtained from New York Hudson Valley towns including Alcove, New Paltz, Delni, and Champlain. There are over 16,871 plants and trees at the park, 88 percent of which is native to New York State. Over 50 percent of TeardropÍs materials came from within 500 miles of the site. "I wanted visitors to feel like they stepped into a glen in the Catskills," said Carey.

Teardrop Park, designed by Michael Van Valkenburgh Associates, features many different kinds of landscapes, including its centerpiece, a 27-foot bluestone wall meant to evoke a mountainside. The wall will develop water on its jagged rock face during the summer, and icicles during the winter. It also has a portal in its center made of limestone for visitors to pass through to the other side.

"The idea of public parks emerged from the social discourse of the early nineteenth century and began with Olmsted and Vaux's Central Park. It's a great honor to be able to design a park for New York City at this time in our history that continues and adds to the important role of parks in our democracy," said Michael Van Valkenburgh.

The Battery Park City Authority is a public benefit corporation created by the New York State Legislature in 1968 to develop a 92-acre site at the southwestern tip of Lower Manhattan. Parcels are leased to developers who build in accordance with BPCA guidelines, which now incorporate "green" provisions mandating state-of-the-art environmental specifications to maximize energy efficiency and minimize water usage, among other provisions. 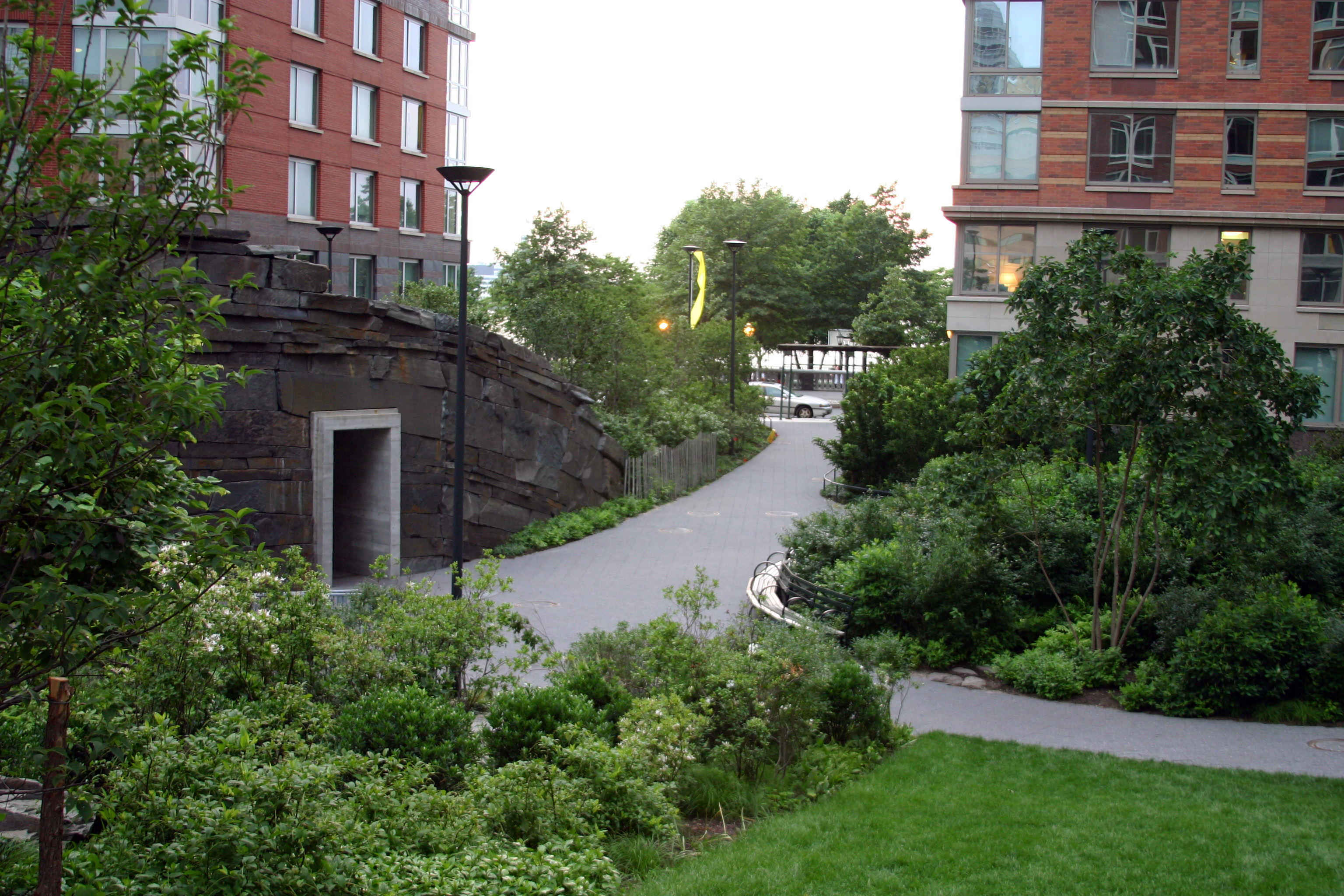 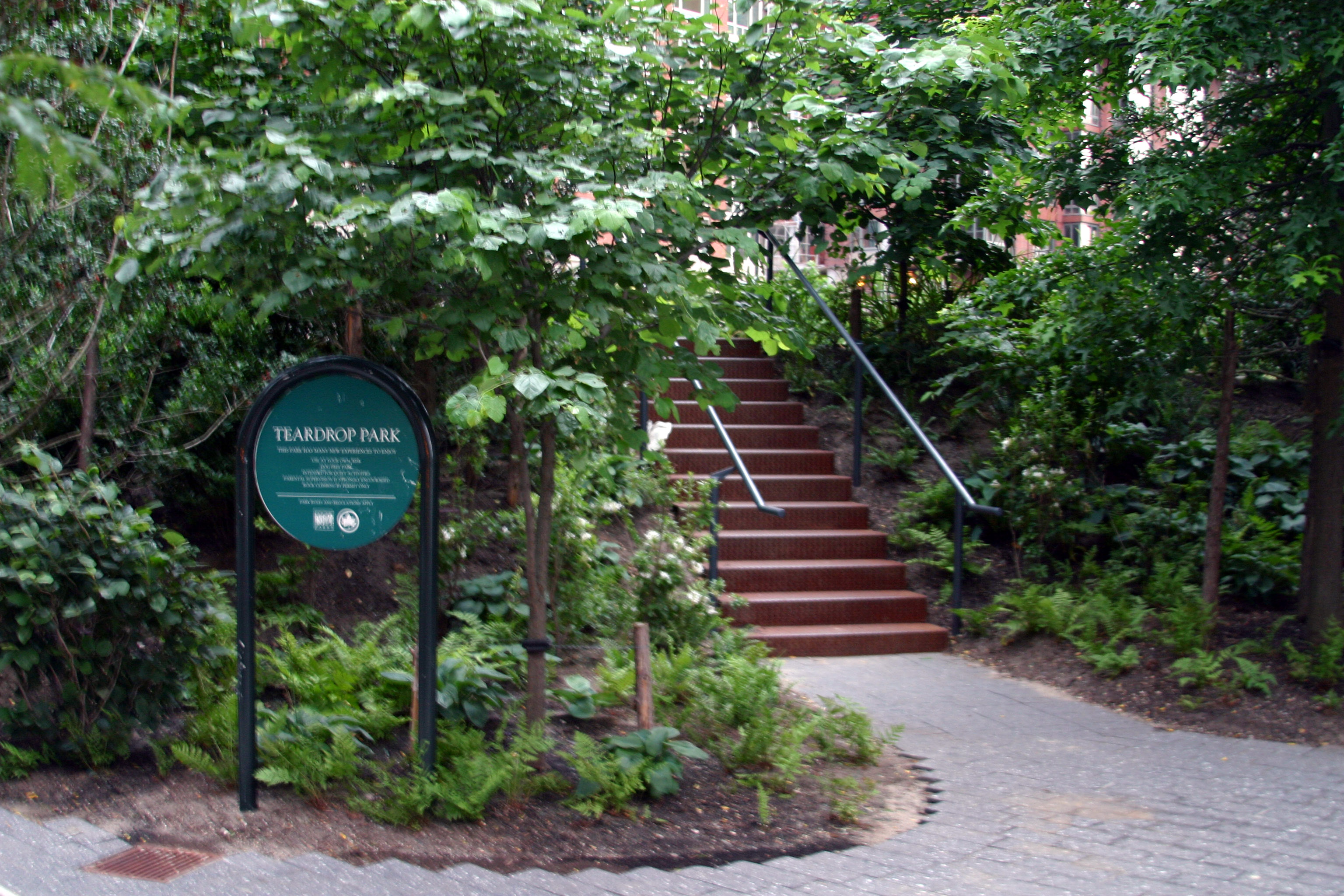 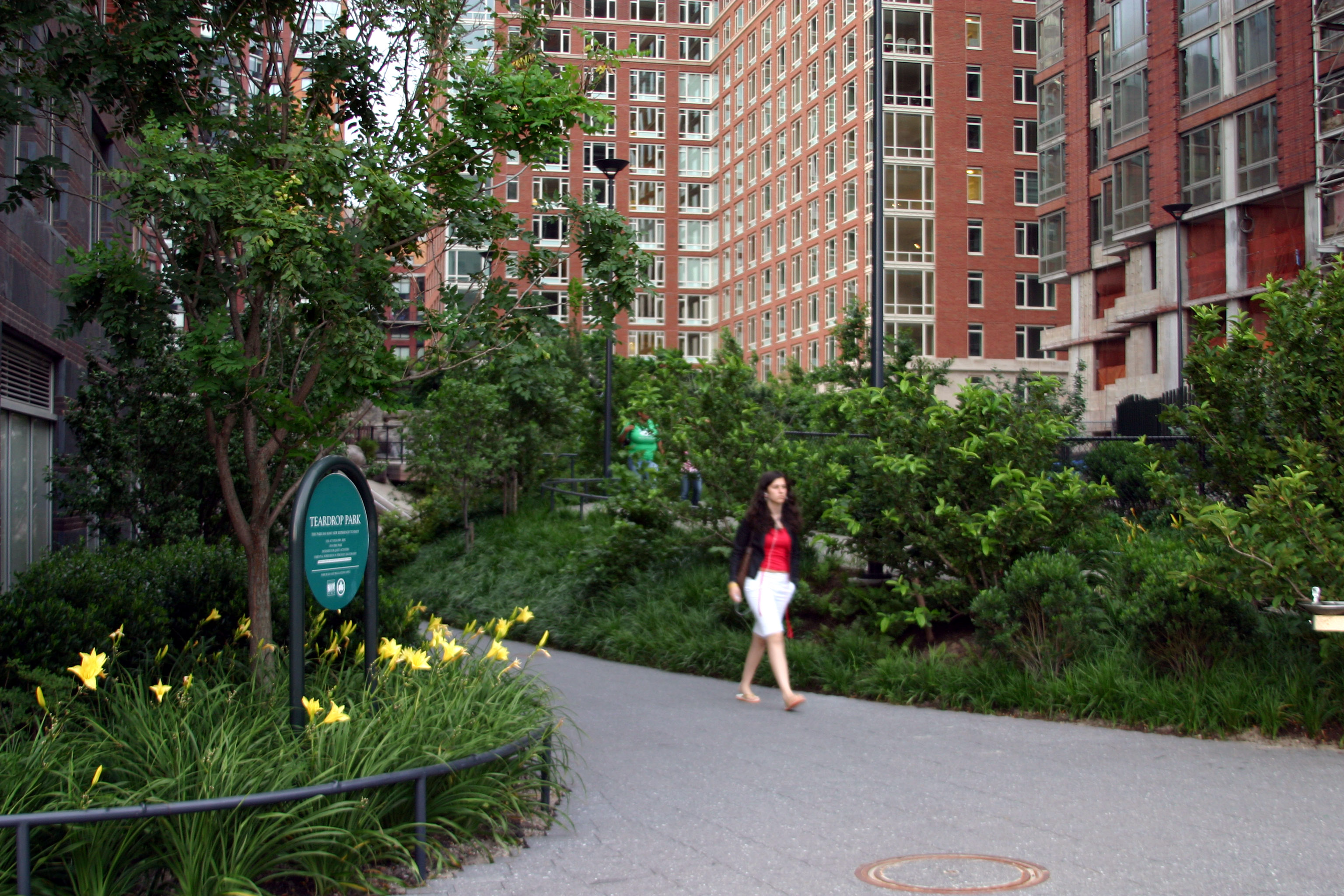 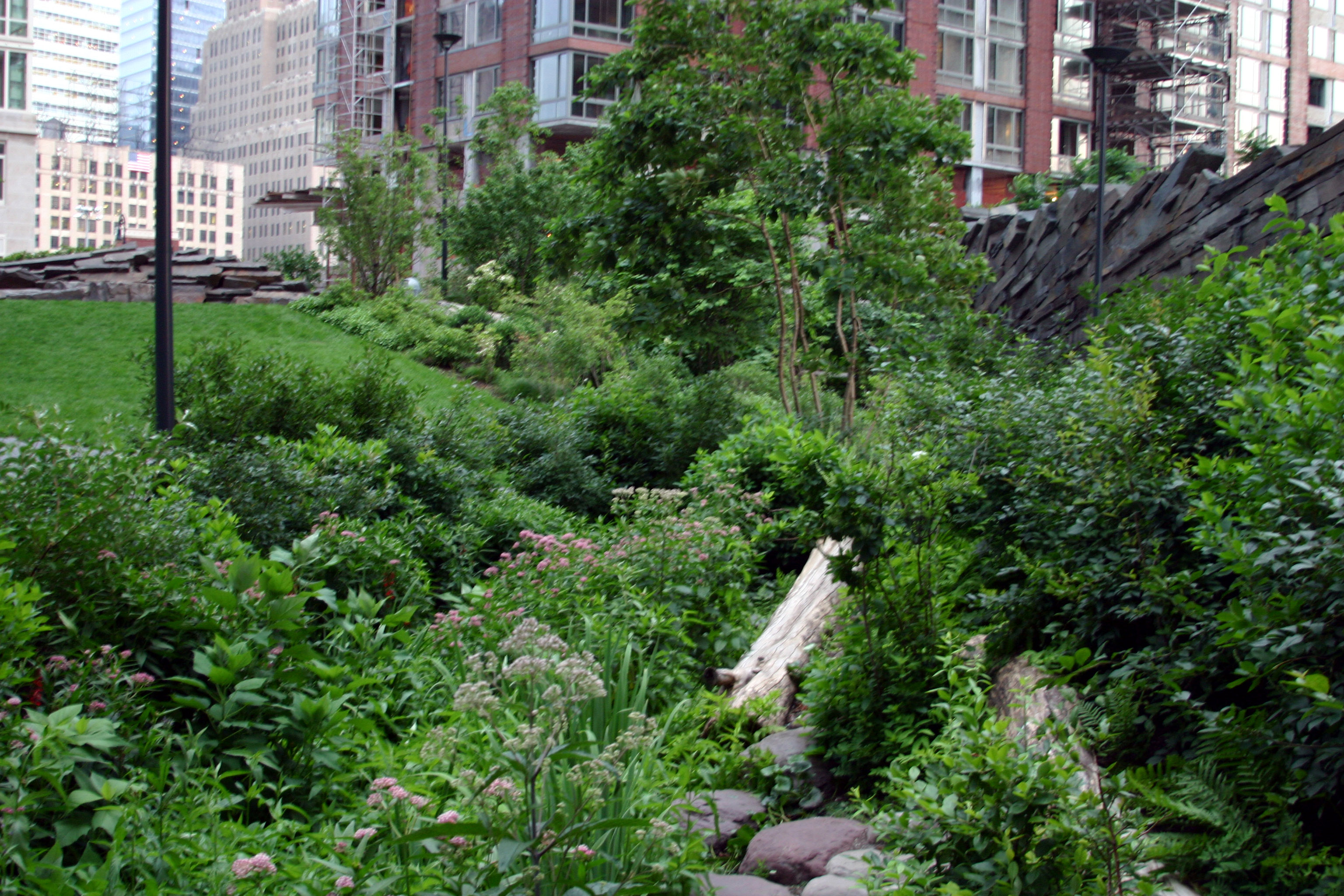 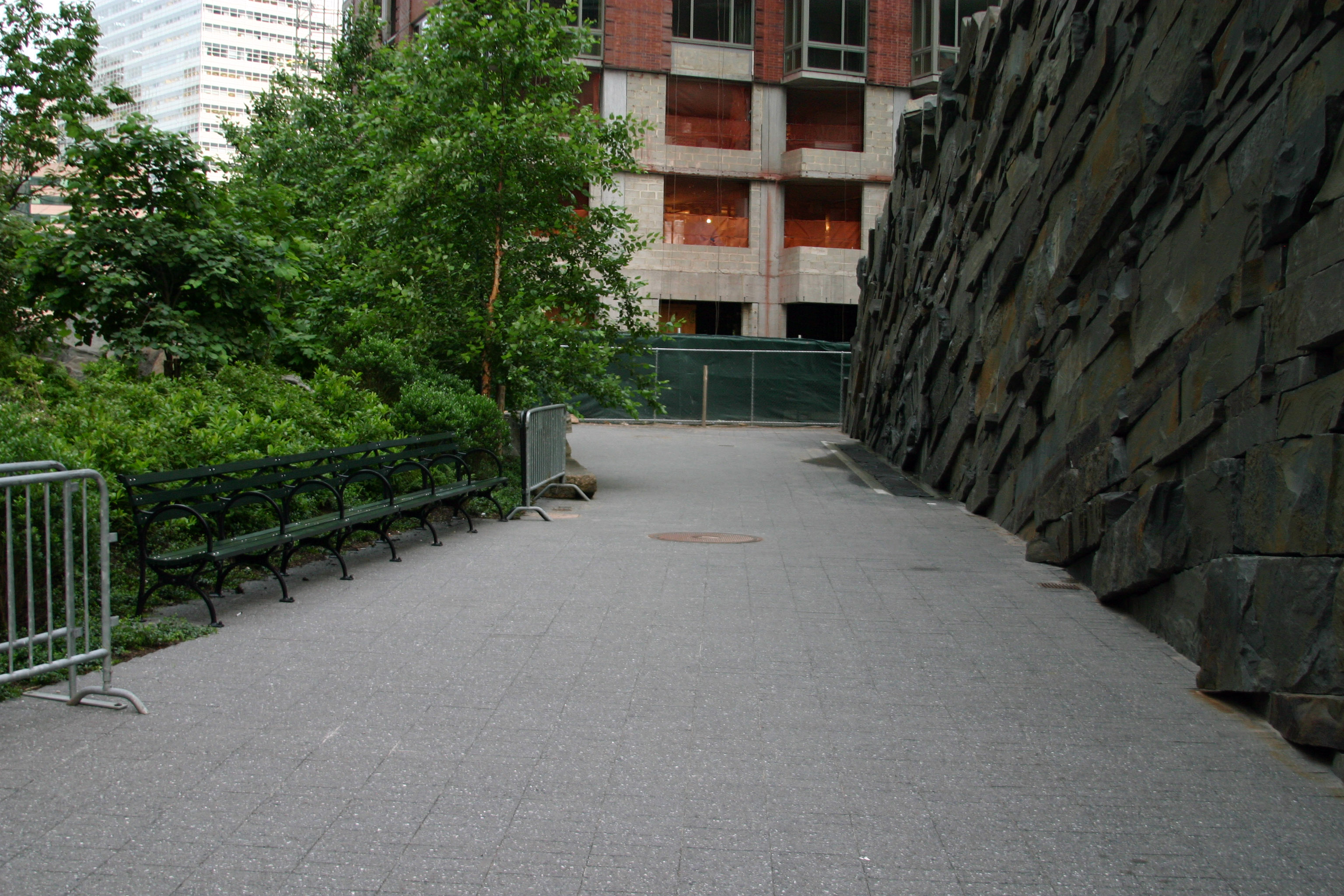