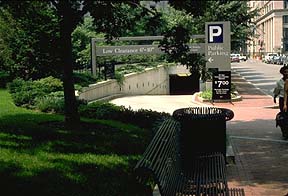 "Park above, park below" is the slogan at Boston's Post Office Square. A public-private partnership financed the design and construction of the park and garage, while fees from the garage are targeted to repay capital costs and ongoing maintenance.

Green areas within the park are plentiful, but there could be more. Since the fountain in the center of the park does not have much water, the surrounding concrete does not provide the feeling of a respite from the city on a hot day. Still, at lunchtime in the warmer months, the grass is usually covered with people enjoying jazz concerts.

A nearby restaurant, the Milk Street Cafe, operates an outpost within the park, and pays rent to Friends of Post Office Square, the nonprofit consortium of local businesses that developed the park. Garage attendants patrol the park and provide general maintenance, while Friends of Post Office Square pays for a private park ranger in the summer. The park/garage design has received more than 20 planning and architecture awards, and created open space in an extremely dense quarter of the city. Before the park's creation, the area was a "ghost town" after working hours. Now, the well-lit park and the activity from the 24-hour garage make people feel safer.

The development of the Park at Post Office Square began in the early 1980sëŠ when the real-estate market was booming in downtown Boston and development space was at a premium. In the heart of the city's revitalized financial district stood a three-story concrete parking garage. With construction and renovation going on all over the downtown area, many buildings in the financial district turned their backs on this unsightly concrete structure.

One developer, Norman Leventhal, was renovating a building across the street from the parking facility and promoted the idea that the area would be more attractive without the garage. Leventhal founded Friends of Post Office Square, a civic organization comprised of businesses located in or near the site, with the intention of buying the garage and redeveloping it as a park. However, the ownership of the old garage and the cost of the project were considerable obstacles. Friends of Post Office Square consulted with the Parks Department and the Boston Greenspace Alliance, a consortium of open-space advocates, and decided to build a parking structure underground with a park above it.

With the strong support of the Boston Redevelopment Authority, Friends of Post Office Square secured the development rights from the City of Boston. The parking garage opened in 1990; the park, in 1992. The $80 million construction cost was financed through a $50 million loan from Bank of New England (now Fleet Bank). To raise capital funds for the garage, Friends of Post Office Square offered stock in the parking structure. Local businesses were sold individual shares for $65,000. Along with the right to a monthly parking space, the purchase arrangement with Friends of Post Office Square included a cumulative 8% dividend to be paid to shareholders when debt relief is complete. The entire lot of 450 preferred shares was sold in just six weeks, raising $29.25 million.

After the debt has been paid, the partnership has arranged for the city of Boston to receive all profits from the garage. These funds are slated to be allocated to other neighborhood parks as well as to the city's general fund.

Because the parking garage is popular there is a waiting list to rent a reserved space, even though parking prices in Boston are some of the most expensive in the country. The garage generates approximately $8 million a year, which covers debt service, taxes and the $225,000 operating costs for the park above. The project has not reached its financial break-even point as quickly as anticipated, due in part to fluctuations in real-estate prices; however, revenue per parking space (one measure the group uses to assess their future costs) has grown steadily through the 1990's, and the Friends of Post Office Square believes future financial stability is assured.

At approximately $34,000 per space, the parking garage was one of the most expensive ever built. The high cost was due in part to the deep excavation, the extra supports needed for the heavy soil above, and the difficulties of buying out the previous owner. The park and the garage were also spared no amenities and are full of design flourishes, such as a fountain, sculpture, a colonnade, polished granite walls and landscaped borders. The parking facility includes a shoe-shine station, clean restrooms, a car wash and an automated checkout system for drivers. (The Wall Street Journal called it "Garage Mahal" in a 1994 article).

Despite the high costs, both to builders and to users, the park is a major focal point for the business district, satisfying both a need for public space and a need for parking. Major obstacles were overcome with perseverance and a bit of cunning. Wresting the site from the current lessee (negotiations took 5 years), and then raising $80 million to finance the project required the stubborn will and deep pockets of the downtown community, many of whom were enticed into the offering by the lure of an available parking space, and the hope that their property would be more attractive due to the presence of the park. 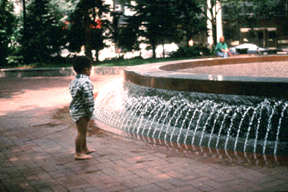 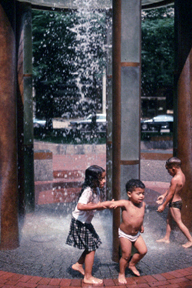 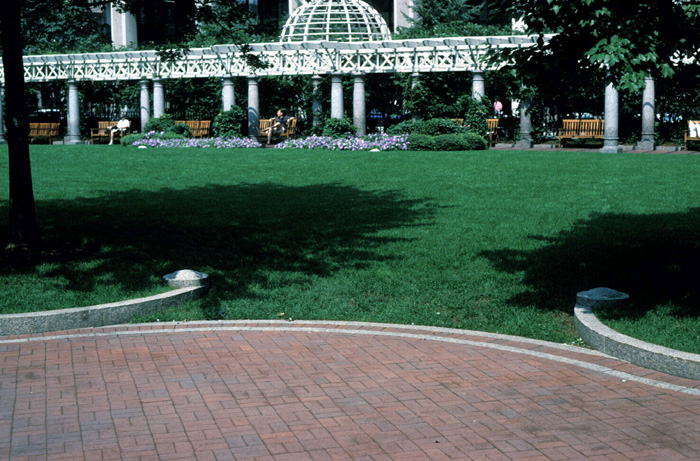 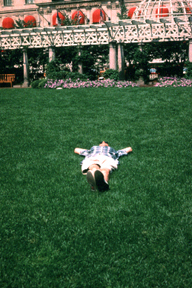