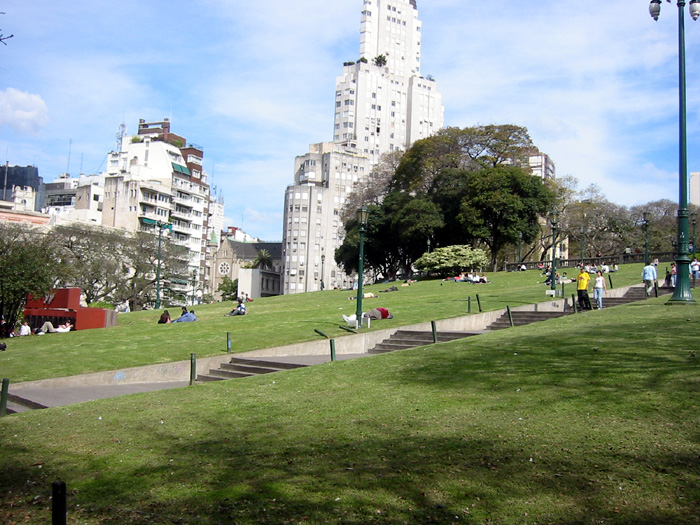 Plaza San Martin is a jewel.

Plaza San Martin is a jewel. It is a stage for kids playing, girls sunbathing, people sleeping, professionals eating. Old folks sit and read. Young people kiss one another. Everyone smokes cigarettes. Buildings surround the plaza but do not impose on it. The plaza is elevated from the surrounding streets and the northern side of the plaza is a great slope going down towards the city and eventually the river. This physical height separates you from the noise and bustle of the city as soon as you step in to it, drowning some of the traffic, conversations, and jarring noises of the city. You donÍt hear the city in plaza, but you feel it even stronger from this heightened viewpoint. Having much of the traffic noise removed lets the other senses come alive and as you look down over the busy city, you realize that Buenos Aires really is a grand place, the city of the South.

The area of the city in which Plaza San Martin is located is a busy part of the downtown area of this city of 13 million. The area is named Retiro, also the name of the large train station located at the bottom of the hill in Plaza San Martin. The name comes from the history of the site- in the 1600Ís the area was located just outside of Buenos Aires and was know as "lugar de retiro spiritual" or "place of spiritual retreat". Though the city and the culture and grown and changed greatly since this time, Plaza San Martin retains this special feeling for the thousands of people that use it everyday.

Located around Plaza San Martin are Retiro train station, the main land transportation hub in Buenos Aires, as well as two subway stops, and a high-density area of office buildings and high-rise apartments. Plaza San Martin also serves as the terminus of the Calle Florida pedestrian shopping mall, a well-known and heavily used area in the center of Buenos Aires.

With such a mix of areas surrounding the plaza, the people who use the plaza are a great variety of types. Young people come here to study, relax, kiss, take in the sun, or play soccer. Professionals filter into the plaza during the middle of the day to take in some air, have a break from the office, and smoke or eat. Older people come to watch people and read or enjoy a game of chess while kids come with their parents to play on the centrally located playground or they improvise a game on the grass areas. Homeless people also use the park for sleeping or for a respite from the tasks they busy themselves with in the city. This is an important function in a city with a large proportion of poor people who need a place to feel comfortable also.

Plaza San Martin is a place for the people, a wonderful and varied experience of trees, exhibitions, views, and people. It never fails to delight.

Plaza San Martin is seamless. It is seamlessly integrated into the surrounding city, and it pathways and spaces seamlessly flow from one to another. Buses come through the area from all over the city, roads surround the plaza but are not unsafe for pedestrians, there are two subway stations which surface at the edge of the plaza. Also, the Retiro Train Station brings people to the doorstep of the plaza from the surrounding country. Once inside the plaza, the pathways allow you to move freely, slowly or quickly. There is a low wire-fence alongside the grassed hilled slowing access to the hill from the paths climbing the slope. This fence is easily and happily hopped-over however by anyone wanting to relax in the grass.

Plaza San Martin is the living room of Buenos Aires. It is the place to take off your shoes, let down your hair, and enjoy some time in the heart of the city, no matter your social standing, personal preferences, or what side of the bed you woke up on that day. The plaza is one of the rare clean places in the city. The statue of General San Martin provides a local landmark and meeting place. People meet their friends or new people here. Tourists take photographs from the top of the hill looking at the splendid clock tower at the base of the hill. If you meet a local and you ask about the beautiful places in the city, you will inevitably be directed here.

The activities taking place in Plaza San Martin are mostly informal and passive, save the childrenÍs play area and a few informal pick-up games of soccer. This is fitting given the setting in the downtown area and the hectic pace around the plaza. Many different types of people use the place: children and their parents taking a break from the city streets, workers stepping outside of their office buildings, tourists just arrived or seeking a lasting image of Buenos Aires to put in their scrapbook. Many people, young and old, travel to the plaza during all times of the week just to sit and read, enjoy a mate drink, and watch people move around. Occasionally, there are exhibitions and small performances staged on the walkways and different gathering areas in the plaza. For instance, the major newspaper Clarin recently set up an exhibition of photos from the last sixty years of Argentina, telling the story of economic prosperity, military dictatorships, World Cup wins, and natural disasters. The large-size photos were set up on stands that wound around the walkway along the upper edge of the plaza.

Plaza San Martin is a comfortable place, and as such, people feel comfortable around one another. It is easy to meet new people here or to pass an afternoon in peace, reading and smoking. It still has the feeling of a spiritual retreat, owing to its past, and so it common to see people just peacefully sitting in the sun or the shade, on a bench or the grass, alone or in couples. There are a large number of tourists here because the place is well-known and located between the train station and Calle Florida (a pedestrian mall flooded with tourists) but it has not turned into a theme park or one-time photo opportunity. Many Portenos enjoy coming to place every day or weekly, in groups or alone, to stay or just passing through. It is a rich environment and so offers any number of social experiences. 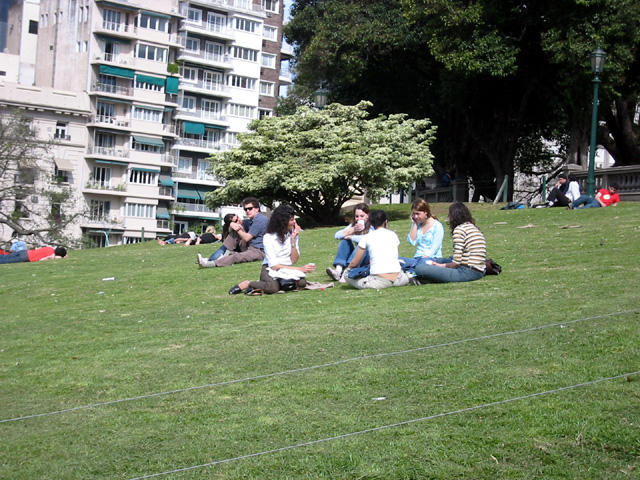 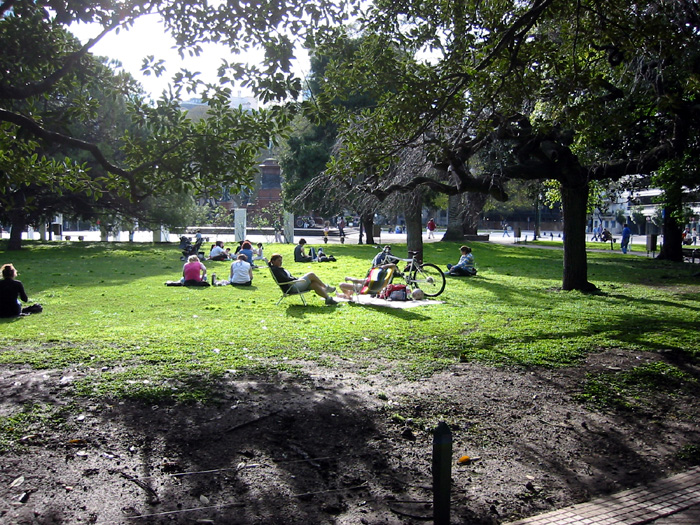 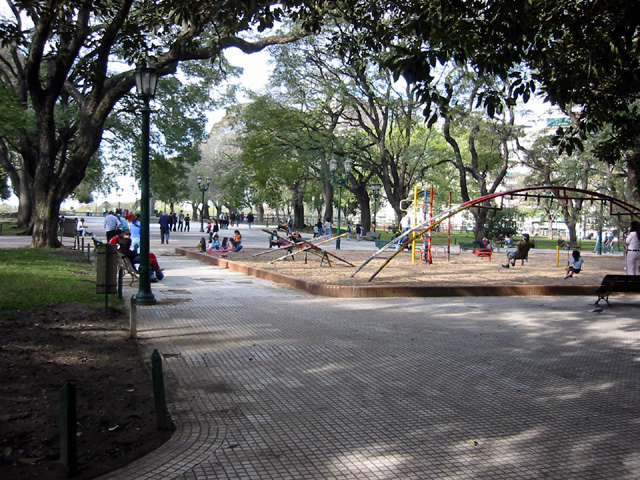 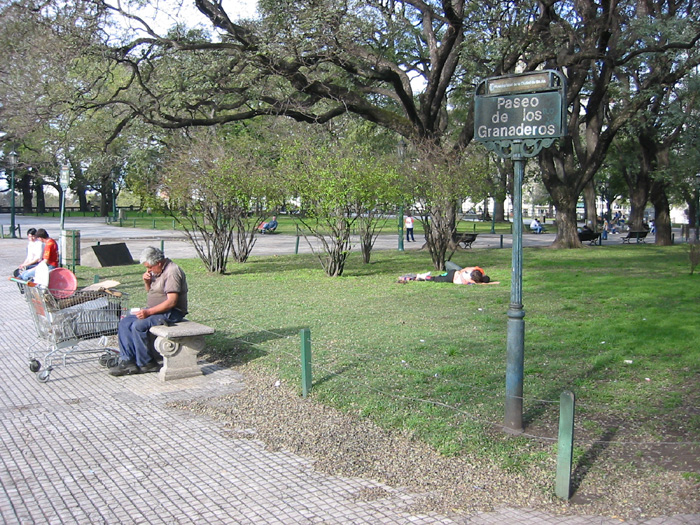 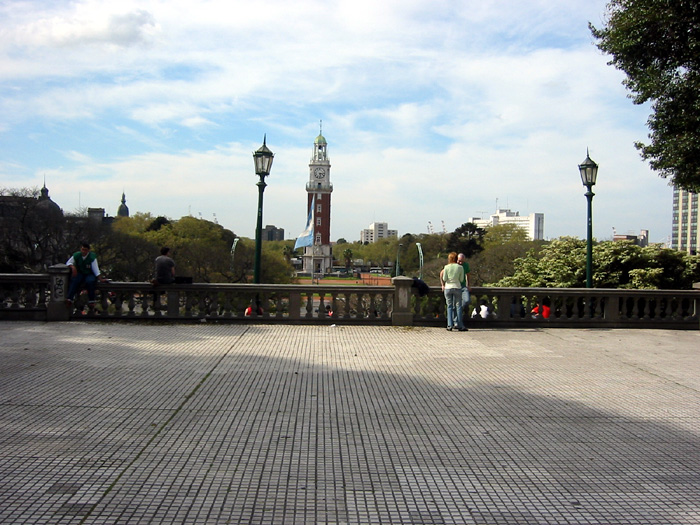 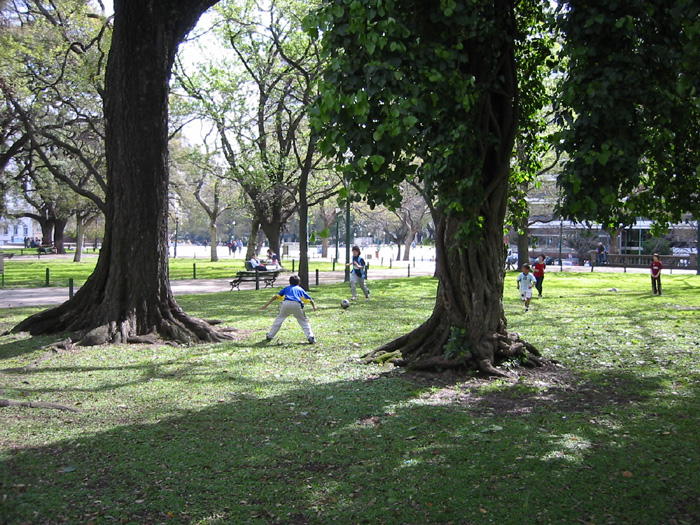 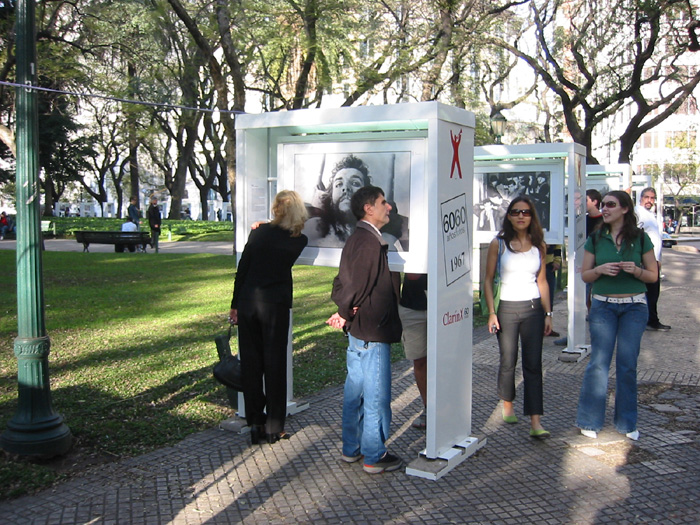