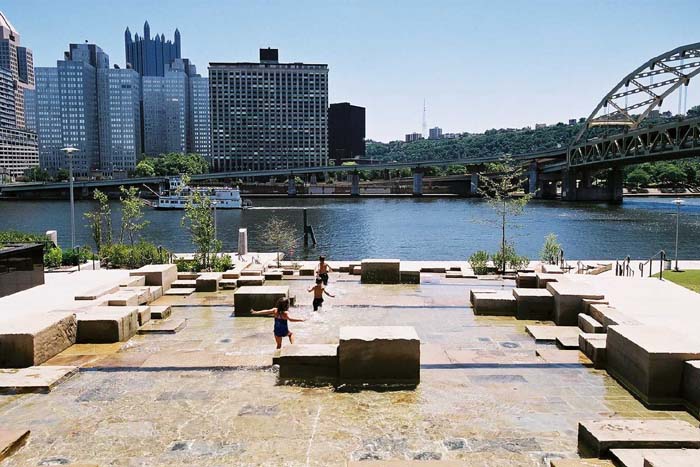 A large public waterfront green space and trail connection stretching approximately one mile along the Allegheny and Ohio Rivers.

This park is special because it successfully achieved the goal of attracting the people of Pittsburgh to their rivers.

A two-level space, it consists of several distinguishing features. The first is the riverwall and riverwalk, which provide a strong trail connection along the waterÍs edge. The riverwalk is 18 feet wide, allowing for various types of recreation. The walk is fitted with boat tie-ups meant to encourage water recreation and alternate modes of transportation. In front of each stadium, a large cobblestone quay accommodates canoes and kayaks, as well as larger crafts that transport people to and from events.

The second level includes large open panels of grass and native landscaping, traversed by accessible paths that run in a southwest orientation, mimicking the river. The largest of these panels, called the Great Lawn, is approximately three acres of grass, suitable for picnicking, informal athletics and even festivals. A staircase is located at the terminus of each road running north south to better improve street level connections to the river. The esplanade runs at the top level of the park in an east west orientation. The esplanade features a broad walkway of brick, granite and sandstone that varies from sixteen to forty feet in width. As mixed-use development continues on the North Shore, this promenade will be used as a connection between retail shops and as a quiet place for outdoor dining and passive recreation. Other features, such as the water steps (an interactive fountain) and the Market Street Pier, have quickly become popular destinations for people of all ages. North Shore Riverfront Park is also home to three memorials that honor American heroes, including the Korean War Veterans Memorial, the Vietnam Veterans Memorial and the Law Enforcement Officers Memorial. A view of downtown Pittsburgh is unobstructed and spectacular from all points in the park.

North Shore Riverfront Park is well connected to PittsburghÍs central business district and the adjacent North Side neighborhoods. On foot, pedestrians may access the park from downtown by using a series of bridges at Sixth Street, Seventh Street and Ninth Street. In addition, the recently completed pedestrian switchback ramp on the Fort Duquesne Bridge allows both pedestrian access and handicapped/bicycle access to the riverfront park. Since its opening in 2001, North Shore Riverfront Park has grown increasingly popular. The park is highly visible, positioned prominently between PNC Park and Heinz Field. Even on busy workdays, it is crowded with lunchtime walkers. During North Shore events, people use the riverwalk as an alternate route to their destinations. Riverboats use water landings in the park to drop off and pick up event-goers, and non-motorized boaters and paddlers use the landings and ramps as access points to the rivers. People may also access the park by bicycle. Future plans are in place for a light rail transit system to quickly transport people from the downtown and local neighborhoods to North Shore attractions.

North Shore Riverfront Park is highly visible and frequently used; it therefore receives constant attention. A maintenance strategy that uses a team of workers from various organizations is currently in place. The Pittsburgh Pirates and Steelers do their part in North Shore Park to maintain the grounds for the public. Both are responsible for routine maintenance, lawn care (including irrigation) and quay cleanup in the sections neighboring their facilities. The City of PittsburghÍs public works department and their landscaper take care of major cleanups in the fall and spring, chemical weeding and fertilization, irrigation start-up and shut-down, trash collection and fountain maintenance. The Sports & Exhibition Authority purchases parts and supplies, and employs a person to handle weekly routine maintenance and touch-up work. The area is both safe and comfortable for people of all ages. Benches are positioned every fifty feet along the esplanade for seating. There are also benches on the Market Street Pier. North Shore Riverfront Park is generously lit, with contemporary fixtures both along the riverwalk and on the esplanade to increase public safety. The River Rescue Boathouse is located directly in front of PNC Park, and emergency vehicles may access the riverwalk via serpentine pathways. Aside from emergency and maintenance vehicles, no unauthorized vehicles are permitted in North Shore Riverfront Park. Emergency call boxes have been installed along the riverwalk for the safety of users.

People of both genders and of all ages use the space regularly for exercise, recreation and even transportation. Activities are both individual and group oriented in nature. Individuals use the park for walking, jogging, bicycling, rollerblading, fishing and sunbathing. All people, especially children, love to frolic in the water steps on a hot summer day. Men and women use the space with the same frequency. The riverwalk and water steps tend to see the most visitors, but no section goes unused by the public. In the past two years, the number of groups requesting use of North Shore Riverfront Park for special events has increased dramatically. Examples of events include the Venture Outdoors Festival, Triathlon and BoatersÍ Regatta, the Pittsburgh Three Rivers Regatta, the Genesis Run for Adoption, the Rotary ClubÍs Ducky Derby Race, the National Aviary Feathered Jewel Gala, the 20th Anniversary Pittsburgh-Wuhan China Celebration and the Head of the Ohio RowersÍ Regatta. Event applications for the 2003 season continue to flow in to the MayorÍs special event office.

North Shore Riverfront Park is truly a front yard for local neighborhoods in the City of Pittsburgh. The park is easily accessible for elderly patrons, and safe for children. The park is inclusive and welcoming for every person, which is evident by the relaxed and friendly atmosphere of the place. Residents feel a sense of pride and ownership, and they bring their friends and out-of town guests to see it.

North Shore Riverfront Park is part of a regional initiative to revitalize PittsburghÍs waterfronts. In the past, the city used its waterways for industry and transportation. As PittsburghÍs economy moved from manufacturing to technology, education and health care, peopleÍs perception of the rivers also began to shift. With the vision of both public and private civic leaders, the desire to reclaim the waterways is being realized. North Shore Riverfront Park is a manifestation of this vision. It is one of the first sections of the CityÍs Three Rivers Park system to be completed. 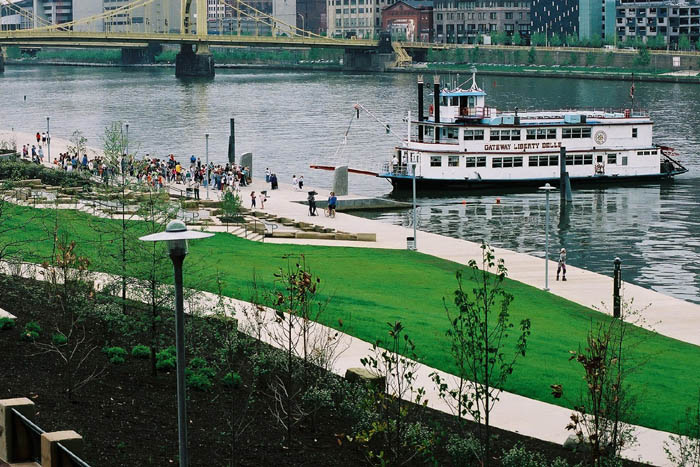 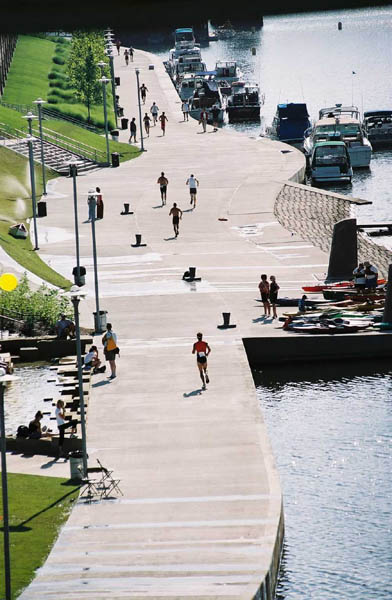 A race along the riverwalk. 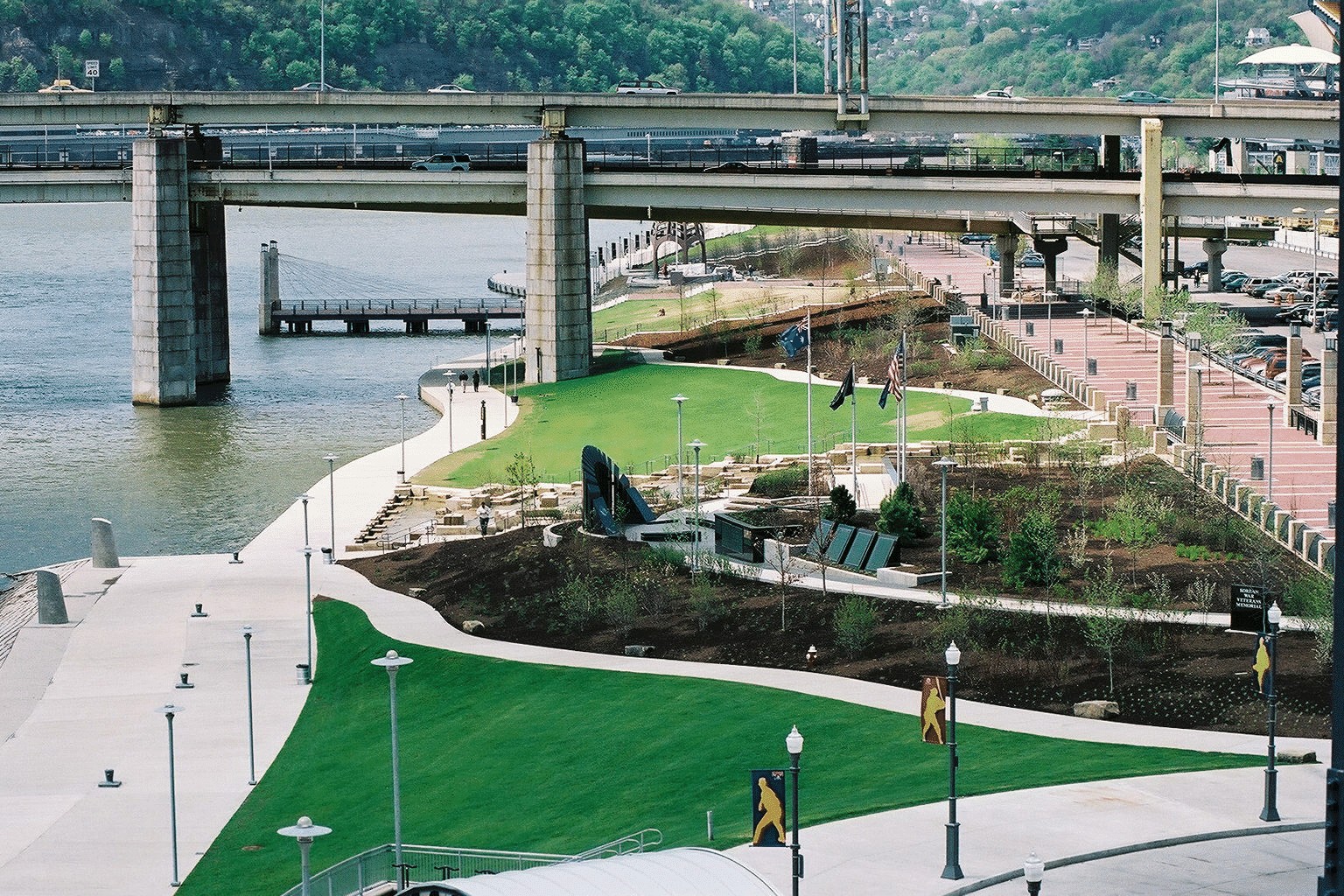