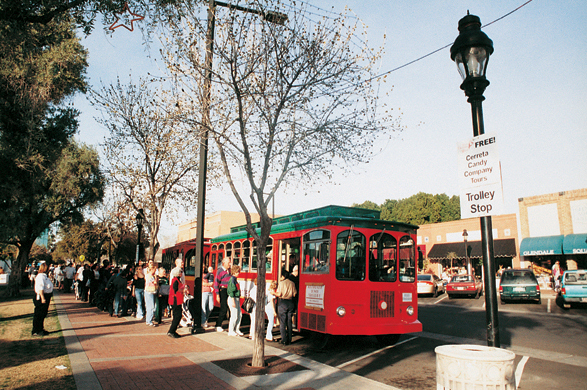 The three-acre park's shady canopy of more than 100 trees has served as the center of activity throughout its nine decades, but probably never more so than today. More than a million people each year use Murphy Park. Renovated in the mid-1980s, the park has a circular brick pathway lined with gaslamps and bricks donated by longtime citizens. At its center sits the city's original 10,000 square-foot library. Entrances to the park are marked by a turn-of-the-century town clock and a bronze sculpture of a man holding pigeons. Two sides of this town square are bordered by original 100-year-old shops that have been renovated into restaurants and antique stores (downtown Glendale was named one of the top ten places to antique by USA Today in 1998).

The other two sides of the park are bordered by office complexes, including City Hall, which is directly connected to the park with a grassy amphitheater that seats 2,000 and hosts a wide array of events year-round. The events that take place in this park have done much to build a sense of hometown pride in Glendale's many transplanted citizens.

As the town square in the center of downtown, the park is accessible form all four sides. The city's main street - Glendale Avenue - runs past the park so more than 45,000 cars pass it each day. Free on-street parking is available on three sides of the park making it easy to access by car. The park is also on two main bus lines that intersect at the park so access on public transit is very easy. The tall town clock marking the park's entrance is very visible o the 45,000 cars which pass the park each day. Because the park lies at the center of the shopping and business areas, people usually choose to walk through the park rather than just along the sidewalks as they shop the downtown.

The park has its own fulltime gardener since it is such a place of pride for the city. After the grass has been trampled by fesival goers, it is brought back to its beautiful green in only a few days. Flower beds grace all main entrances with low block walls along the flower beds to serve as permanent seating areas. Picnic tables dot the park so that people working downtown can lunch. Public restrooms have been built outside of the library, which sits in the center of the park. More public restrooms are across from the park in an office building.

Because of the importance of Murphy Park and the fact that almost all of the downtown's 600,000 tourists each year walk through the beautiful park, the city recently placed its new Visitor Center in the office building across from the park to gain the greatest visibility. The library in the center of the park has a special section on antiques, catering many tourists who visit Glendale's antique shops each year. The brick sidewalks and gaslamps match the sidewalks of downtown which are lined with brick and gaslamps, too. The fact that downtown Glendale is made up of many small blocks and is an intimate walking town, the scale of the three-acre park is perfect for a town square and in keeping with the 100-year-old shops surrounding the square.

Murphy Park serves as a park, town square, public-gathering space, festival site and landmark. Glendale is a "City of Festivals" and almost every festival takes place in Murphy Park. The first really major event began in 1949 as a salute to Glendale's being the state's Melon Capital. More than 80,000 pounds of watermelon was served to 40,000 spectators back then and the tradition continues in Murphy Park today.

While an evergree tree in the park has served as the city's Christmas Tree for decades, beginning in 1994, the city draped a million lights on the trees in Murphy Park. This incredible holiday light show, called "Glendale Glitters," lasts for two months and attracts about a half milion people to the park each year. Glendale Glitters begins with "Glitters Spectacular" holiday show in the park's amphitheater and vendors throughout the park. More than 50,000 people attend this park lighting each year and every TV station in town covers it live as the entire park is lighted.

"Enchanted Evenings" take place every weekend in December under the lights. Santa is there, vendors and horse-drawn carriages to transport visitors throughout downtown to see the lights. Then, the third week in January, the park lights are turned off with a special festival - "Glitter & Glow." Ten streets are closed in the downtown and Murphy Park serves as the center of activity - housing craft and food vendors. The park is surrounded by hot air balloons in the street glowing under the holiday lights. Bands and entertainment fill the park and every street corner. More than 60,000 people come to see the last night of the lights.

In April, when the dogwoods are in bloom, Murphy Park is home to Glendale's Jazz Festival. Sounds of jazz fill the park as 25,000 people lay on the grass under the canopy of trees over a three-day period.

In June when the Arizona weather is scorching, thousands of people cool off with water games and watermelon at the Melon Festival in Murphy Park. Then in September, Glendale's Hispanic population celebrates Fiestas Patrias in Murphy Park. More than 10,000 people honor the city's Hispanic heritage with red, white and green flags lying over the park and dancing and singing in the amphitheater. October brings the Fire Muster to Murphy Park. Fire companies statewide compete in water games in the park after the Fire Prevention Parade ends at the park.

In addition to festivals, Murphy Park houses the Downtown Merchant Association's "Glendale Saturday Market," an arts and craft fair and farmer's market held every week from October through May. Almost 100,000 people visit this 12-year old fair each year. Many of the vendors in the market fall so in love with downtown Glendale that they become permanent shopkeepers in stores around the square.

The city's Parks and Recreation Department also uses Murphy Park as home to many of its events including highlighting what the kids have learned at summer special interest classes. But the highlight of the summer is the two-month long concert series every Thursday night in the Murphy Park amphiteahter. A citizen band made up of 100 volunteers has played for 34 years and moved to Murphy Park as soon as the amphitheater was built. These concerts are a city tradition.

In a citizen survey, 95% of the city's population had been downtown in the past year for something other than business. Most went to attend festivals, to shop or to eat at the restaurants. Murphy Park would be the center of all of this activity. The summer band concerts are the epitome of that "small-town" feel that Glendaleians also say they like about their downtown. Murphy Park is a big part of that small-town feel. This small park is known to all and is the pride of downtown Glendale. It's a place W. J. Murphy would be proud of today. It is the center of all public activity in this city of 212,000, just as it was when it was a town of 1,000 in 1909, when Murphy donated it as the town square.

Murphy Park is not a big park, but it is important because it is the heart of Glendale, Arizona - a city of 212,000 that has grown 120% in the past 20 years. With more than 30% of its population being new in the past 10 years, it is hard to build a feeling of hometown pride in Glendale. However, Murphy Park has gone a long way in helping build that pride since it was donated 92 years ago by founding father W.J. Murphy, for whom the park is named.

This lasting gift of land to the city was made with the stipulation that citizens promise to keep the square block as a park. Despite several attempts to develop the land, Murphy's wish has been honored and beautiful Murphy Park stands today as an oasis of green in the downtown and as testimony to Murphy's foresight. 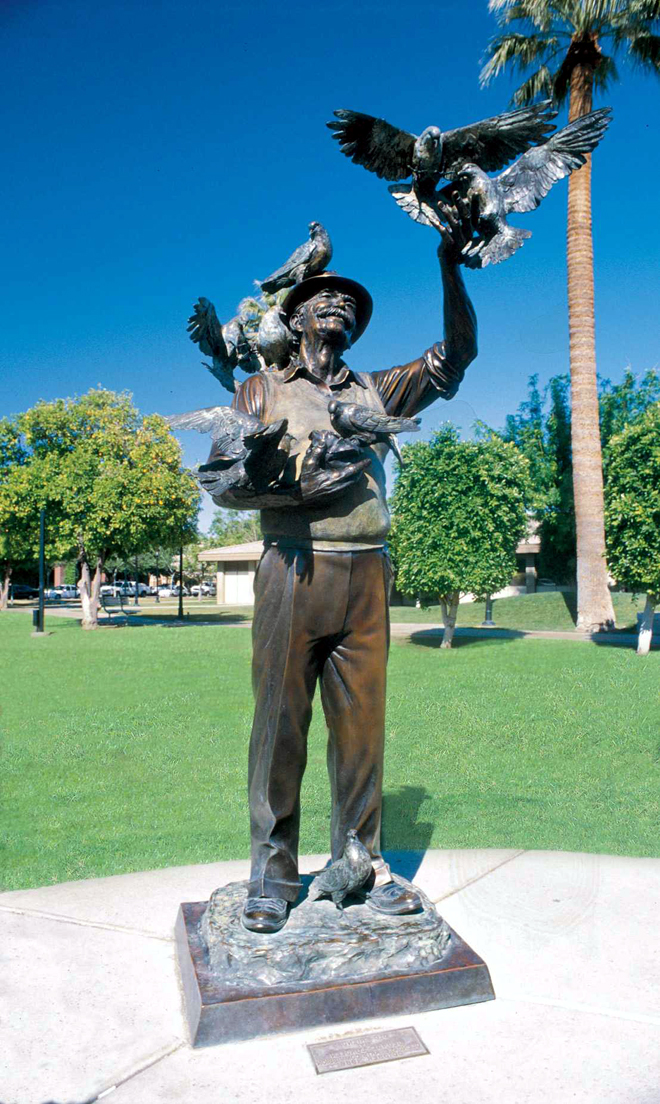