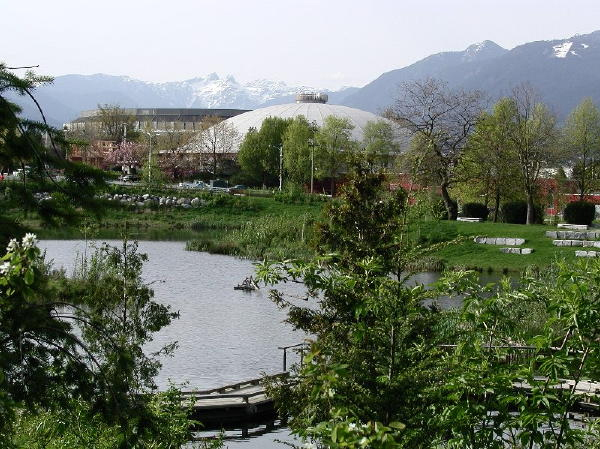 Hastings Park is the result of a regreening and community-reclaiming project of 167 acres of neglected, largely paved public land, occupied by fairgrounds and a horse racetrack. The site gently slopes down to the north where it has a spectacular mountain view with an inlet in between. Located in a park-deficient area of Vancouver and surrounded by major traffic arterials, the project hopes to reintroduce some much-needed greenspace and revitalize the highly multi-cultural neighborhoods' community life, including the commercial areas adjacent to the site. The new park's features, designed by the landscape architects' firm of Phillips, Farevaag & Smallenberg (Vancouver), include a natural area with biofiltration marsh, cleansing urban run-off from surrounding neighborhoods; an active 'people area' in the form of "Il Giardino Italiano,' a modern adaptation of a classic Italian garden theme complete with opera walk, sculptures, raingarden, play-fountains and picnic tables; an all_e of plane trees; a Japanese garden; a children's area; and a skateboard rink, bocce, basketball and tennis courts, and sports fields. Next phases include several existing buildings to be refurbished for community use, more natural greenspaces and a creek (possibly fish-bearing in future) to connect the marsh and ponds with the Ocean Inlet one-half kilometer to the North of the park. A community stewardship group called the Hastings Park Conservancy, a non-profit Society, has been created to oversee the gradual realization of the community's vision, arrived at after an intensive year of public input processes and planning forums. The group concerns itself with community development and 'ownership.' It identifies park user groups, liaises with local organizations such as schools, community centers, residents' associations and social services agencies, and is beginning to program the new park with activities true to the values expressed by the planning forums' participants. To do this, the Conservancy has its own membership, will soon have its own staff, and has a Joint Agreement with local government, the Board of Parks and Recreation. In Vancouver, this is a separately elected body, similar to City Council, but specializing in urban park and community center and recreation issues.

The site, traditionally used as a fairgrounds and racetrack, is surrounded by heavy arterials and has been alienated from the community for a long time. The first park development phase included removal of pavement and some buildings, and the construction of the natural marsh area, called 'The Sanctuary.' In a very short time, wildlife and birds returned to the area. Volunteers conduct educational tours with schoolchildren, and environment watch groups carefully monitor plant growth, birdlife and over-all functioning of the natural area (including garbage, dogwatch, repairs and safety issues). The plan includes a landbridge over one of the arterials in future; two tunnels are in place, and existing and future crosswalks and traffic patterns will be reconsidered in the next few years as park use increases. The place is in transition, pending decisions with regard to the annual summer fair and racetrack: the old and the new park 'personas' are currently creating a patchwork quilt of uses. The old uses still require considerable paved areas to accommodate vehicular traffic and parking.

Hastings Park is off to a very good start, particularly due to the extensive public input that has gone into the new park's values, subsequent design features and the resulting pride of place among community members. Users already reflect the ethnic diversity of the area. The fountain area in the Italian gardens is often populated with people of all ages and backgrounds, sitting on available benches and built-in design features, supervising children playing around the fountains and water channels. The skateboard rink is a hit with teenagers for whom, formerly, nothing much was happening in this part of town. The first annual 'Hastings Park Day,' a volunteer-driven multi-cultural summer festival, was held in 2002. The more variety in uses at all times of day, the safer the park will be, is the motto, and the over-all design with its alternating active and passive space allows for this to happen.

The design purposely considers group vs. solitary activities, 'chance encounters' vs. programmed events, and inter-generational/intercultural meeting opportunities. The Conservancy, during these first years of its existence, is focusing on community awareness-raising activities to actively create new user-habits for a space that used to be fenced in and, besides the three-week summer fair, did not play a year-round role in the lives of the area's residents.

Hastings Park is a great place for large family gatherings or open-air potluck dinners. The 25-foot-long picnic tables are surrounded by bold blocks of plantings, grouped to great effect with contrasting texture, color and seasonal characteristics. At all times, you will find visitors admiring the unusual, contemporary plantings and design details. The active 'people area' has lots of things to do and see for people of all ages and abilities. The centerpiece of the park, the environmentally sustainable 'Sanctuary,' is of great interest to environmental groups, and serves as a showcase of collaboration between the Engineering Department, the Landscape Architect and the local community.

The regreening of Hastings Park is a long, slow process that requires, besides large amounts of money, the community's sustained advocacy, dedication and perseverance. It requires flexibility and creativity on the part of all players. The entire process, started in 1995, is expected to take 25 years and cost approximately $50 million. 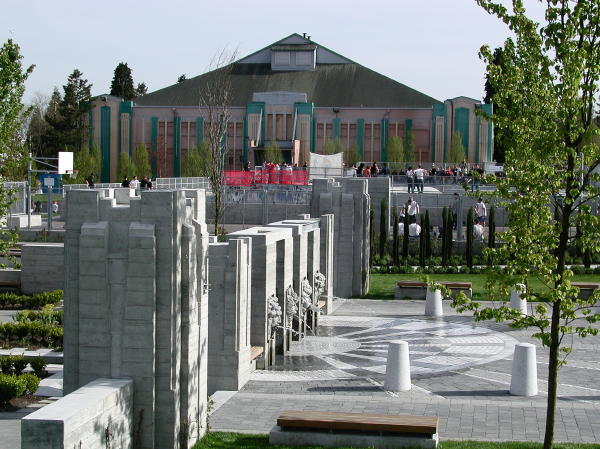 The Italian Garden. Images courtesy of Vancouver Parks and Recreation.