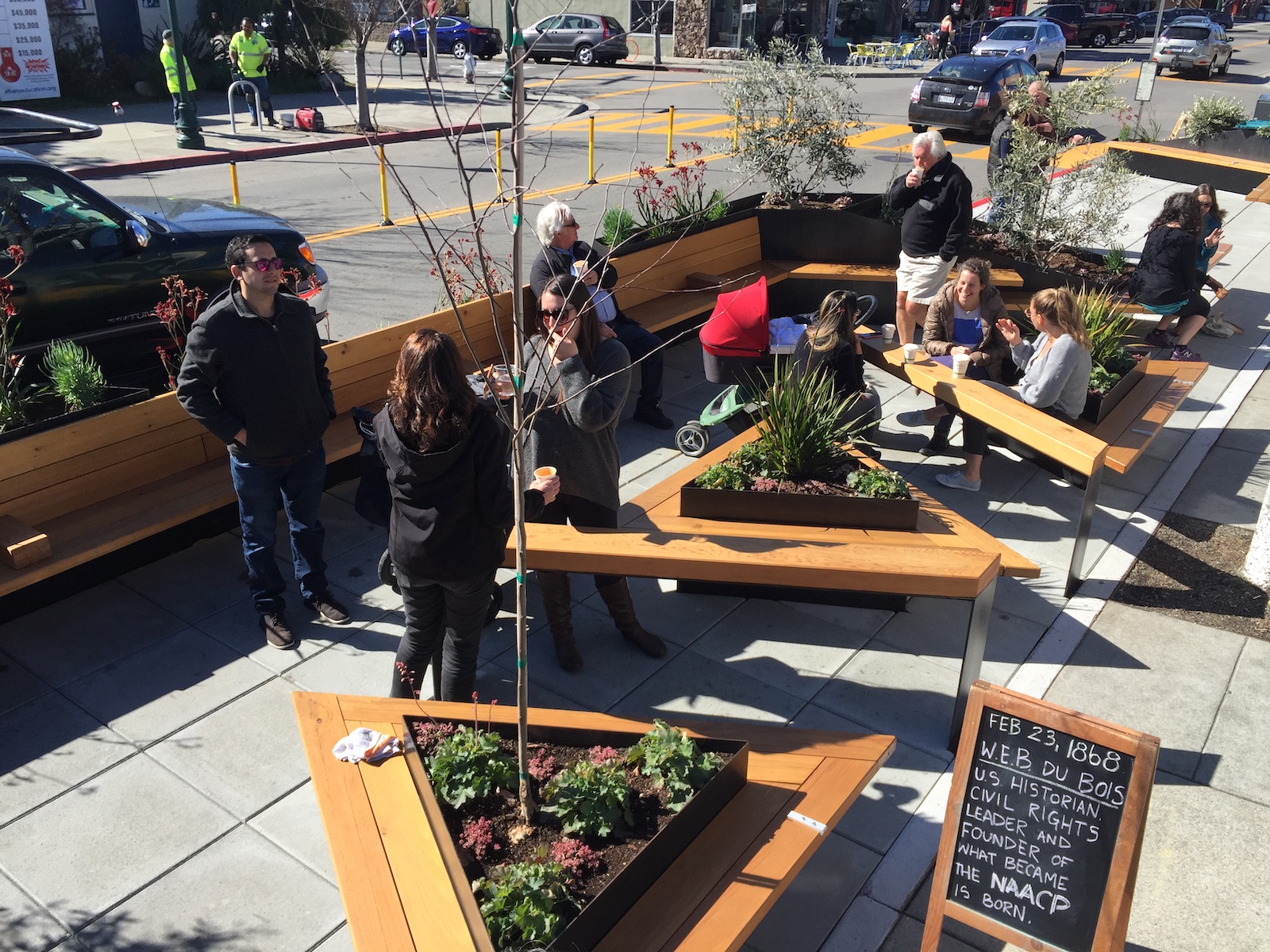 When we think of “firsts” in terms of innovative placemaking in the United States, we might think of big cities like New York. But the nation’s first ever bus stop parklet is not in a big city. Rather, it’s in a town of 2 square miles and 20,000 people about 20 minutes away from San Francisco. The City of Albany, California, now has a bus stop parklet, thanks to the initiative of two business owners and a collaborative effort between residents and City agencies. In a region that faces geographic constraints, this parklet makes use of existing space to provide a common meeting point and a community hub for the city's residents.

Albany is a town located in the eastern part of San Francisco Bay, 20 minutes away from San Francisco. It is a relatively affluent town, with a median income of $87,694 and a predominantly White and Asian population. Most residents work in San Francisco, Berkeley and Oakland, while a few work in the town itself, where the top employers are the Albany Unified School District, Target, the Agricultural Research Service, Golden Gate Fields, and the City of Albany.

Bonnee and Abraham Elterman own As You Wish, a frozen yogurt shop, and Hal’s Office Coffee, on Solano Avenue, the town’s main street. In 2016, they noticed that parklets had started to pop up in the city of Sacramento, and thought it would be nice to have one in front of their stores. They approached the City of Albany’s Department of Recreation and Community Services, which had been thinking of implementing parklets and responded positively to their request. The only problem was that the area in front of their stores was a bus zone.

Initially, the Eltermans and the City asked AC Transit, the transit agency serving Alameda County, if they could move their bus stop. Fortunately, AC Transit had just received a $100,000 grant to develop parklet design guidelines—including how they might work with bus stops. They also knew that moving the bus stop would mean undertaking additional traffic mitigation and changing bus schedules. The guideline document only cost $75,000 to produce, so AC Transit decided to put the remaining $25,000 towards the project’s construction. The Eltermans decided to commit $23,000 towards the project with an additional $3,600 per year for maintenance, while the City committed another $15,000 and the Albany Community Foundation donated an undisclosed sum towards the project. There was still, however, a funding gap that had to be met. ‍

The Elterman’s decided to ask the community for their support by launching a Kickstarter campaign. They posted flyers on their store windows, shared on social media, and used word of mouth to inform residents of the Kickstarter. They eventually received over $20,000 from 137 backers, with most coming from Albany, Berkeley, and San Francisco. With the support of the community behind them, they finally started construction of the parklet in November 2017.

While the community did not have a direct say in the design process, the City of Albany did engage residents to build support for the parklet. The City mounted big-screen TVs (stored in the Elterman’s shop at night) on the location of the proposed parklet featuring renderings of the design, while staff from the City’s Department of Recreation and Community Services answered passerbys’ questions. The City and the Eltermans found that residents were mostly very excited and enthusiastic about the project.

The town has an average car ownership of two per household and an average transit ridership commute of only 26.5%. However, the two census tracts that comprise a half-mile radius around the bus stop have an average rate of 57.1% transit ridership. This bus stop in front of the parklet is served by two highly used routes: the 18, which is the local route that connects downtown Albany to Berkeley and Oakland, as well as the G, a limited express bus that runs to downtown San Francisco. Most people access the bus stop by foot, according to a representative from AC Transit.

The bus stop is fully ADA-compliant, and is accessible for people who walk and cycle alike. Next to the parklet is a curb extension, which helps to increase pedestrian visibility when crossing the street. In conjunction with the opening of the parklet, the City also decided to repaint the crosswalk to make it more prominent. For a short period after its opening, the City put plastic bollards on the median strip so that cars would not go around the bus as it was parked at the stop.

While there are no bike lanes, the 25-mile per hour speed limit along Solano Avenue allows for a relatively safe environment for people on bicycles, although that could still be improved upon. The bus parklet itself also features bicycle parking.

The bus parklet itself was designed by the Eltermans, who are also visual artists when they are not busy with their shops. It features polished wooden benches with drought-tolerant landscaping. The benches are adorned with flowers and plants that the Elterman’s themselves maintain. The parklet has a constant presence throughout the day, from as early as 7:00 AM, when the coffee shop opens, to around 10:00 PM, when the frozen yogurt shop closes. It is used by people of all walks of life beyond transit riders, including children who go to the primary school across the street and mothers with their babies and children.

The bus stop itself is located in downtown Albany on Solano Avenue, the main business corridor. Within a five-minute walk, there are multiple restaurants, a primary school, a movie theater, a post office, a nail salon, a YMCA, and other specialty shops. Just a few blocks east one can access the Ohlone Greenway, a 4.5-mile pedestrian- and bike-only path that connects multiple towns in the East Bay.

The Elterman’s did not want to design the parklet as just an extension of their businesses but rather as a space for everyone to use. Given the strategic location, people waiting for the bus are often present and so are those eating yogurt or drinking coffee, socializing with other people, eating their lunch, meeting with their tutors or book clubs, and conducting work meetings. When the primary school across the street gets out at 3PM, the kids all flock to the parklet to play or eat their frozen yogurt.

The parklet has brought a sense of place to the neighborhood and to the community of Albany, and it is especially evident that the parklet goes beyond serving as an extension of the Eltermans’ businesses. Rather, it is a public park for all to enjoy, taken care of by a community business. No purchase is required from either store to use the parklet.

Not only is it used as a common meeting point for individuals and small groups, the Eltermans help host a lot of community gatherings at the parklet. For example, they partner with the City’s Department of Recreation and Parks to host movie nights in September. They’ve also hosted concerts in the parklet featuring local musicians. The Elterman’s are now conferring with the City to bring more programming to the community at this bus stop parklet. 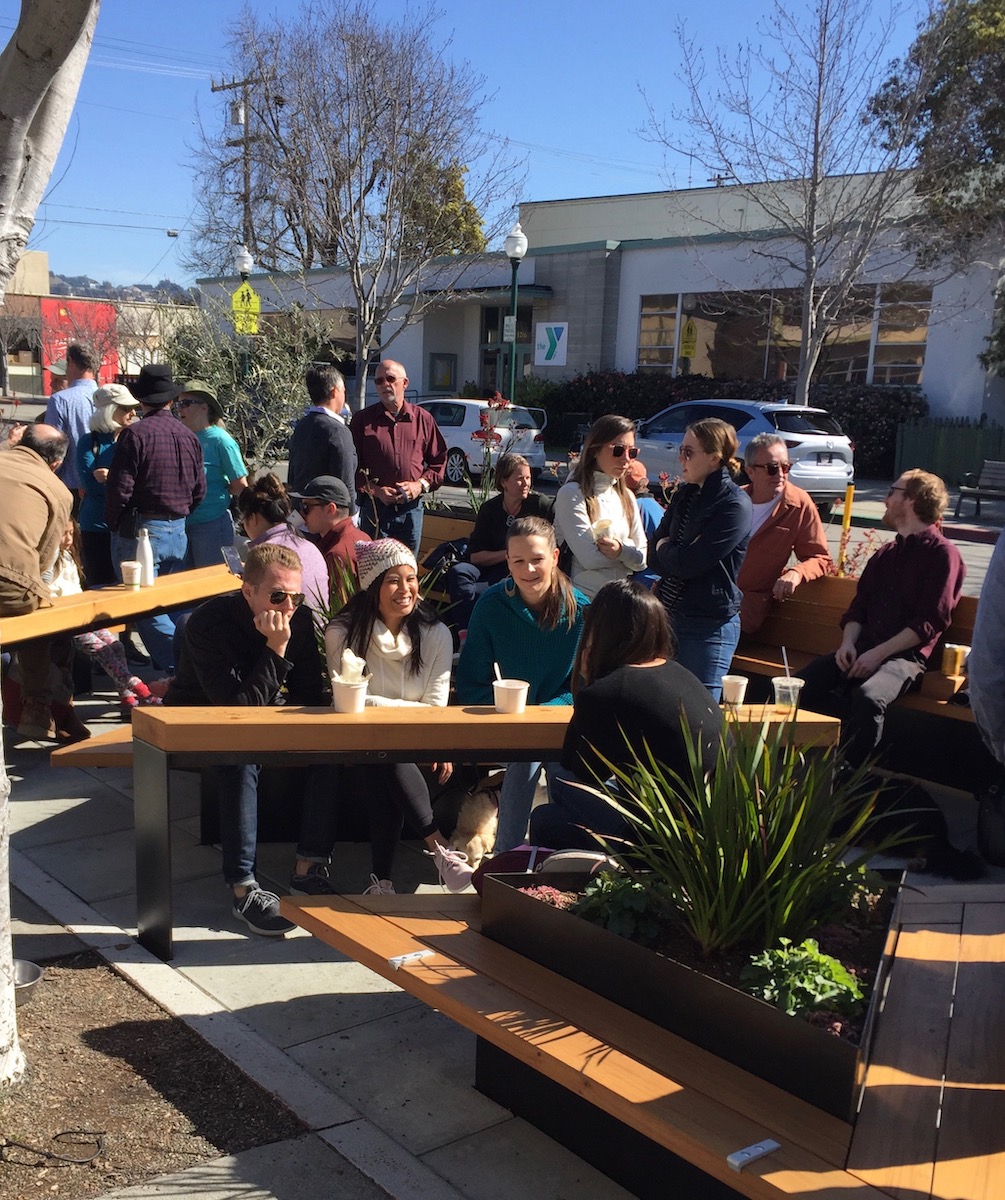