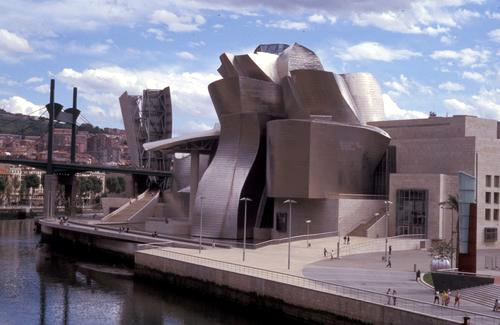 One of the worldÍs most famous buildings, this museum is in many ways an attractive and impressive piece of architecture. Unfortunately, as a public space it is extremely unsuccessful -- even dangerous.

A spectacularly beautiful and sculptural building, the Guggenheim Bilbao succeeds monumentally in its efforts as an iconic building, and has drawn much attention to the city of Bilbao. However, the project fails miserably as a public space, missing a significant opportunity to celebrate and support the cultural and community life that is pulsating throughout the city.

Situated prominently on the waterfront near the center of Bilbao, the building interrupts the life of the city, and is an insult to pedestrians who would like to use the space for anything other than gawking at the building. Frank Gehry, the architect who designed the museum, appears afraid to support, or even acknowledge, human activity in and around his buildings. The museum may bring people to Bilbao, but it only degrades the civic and cultural life that makes people proud to live in the city. Moreover, as a symbol of successful investment in architecture, it is limiting the role of architecture to mere icon.

It gets attention, but as is the case with most attention seekers, when asked for attention in return, it gives little back. The building ignores the riverfront that gives it prominence, it ignores the comfort of the people that come to its vast public spaces, and worst of all, it ignores the very city to which it is meant to draw attention.

Walking through Bilbao, the building acts as a distraction from some of the most vibrant public spaces and sophisticated community life in Europe. While the power of the iconic building has been broadcast around the world, it can be easily interpreted as an attack on human activity and civic life.

While Bilbao as a city may be near the height of civilization and Frank GehryÍs building is an icon serving as a beacon of the cityÍs status, it also is a public space that shunts the very civilization it is supposed to celebrate. Architecture emerged as a revered profession because of the way successful buildings can reflect and support a civilization, a culture and a functional purpose. GehryÍs building seems to fail in all these regards and is therefore doing a great disservice to Bilbao, and also to the profession of architecture.

Great architecture and great public spaces should go hand and hand, but unfortunately, they seldom do. The arrogance of the Guggenheim Bilbao and the approach to design and development it portends is an affront to public spaces everywhere. The public spaces around this building are a void in the civic life of a great city.

One might argue that this building has brought attention to Bilbao, but in many ways that attention has been a distraction, or at best an ephemeral sugar high, for a city that has some of the best public spaces in Europe. Because the museum not only ignores context, but also pushes away and hides BilbaoÍs rich culture and social life, it is a net loss for the city.

Though it is near the center of the city, the Guggenheim shuns any relation to its context. The building challenges locals and tourists (not to mentioned handicapped people) to enter some of the least inviting public spaces and entranceways anywhere.

The brutal design of the steps is demeaning to human beings. The endless blank and textureless surfaces are equally unfriendly. The lack of signage and amenity follow suit.

People pass through this space as quickly as possible as there is nothing to do here but be impressed by the architecture.

I traveled to Bilbao on my honeymoon and was very excited to see the famous Guggenheim Museum and all that it has supposedly done for Bilbao. It was mid afternoon on a beautiful Saturday in September when we came upon the building. The well-traveled Jeff Koons flower puppy sculpture was in front, with some attractive seating and plantings in the foreground. Behind it was the inspiring sculptural building topped with the proud Guggenheim sign and an outdoor caf_ below an awning, all still enticing us to come closer.

At this point I was sure this was going to be a great building with all kinds of innovative and modern place-creating design ideas that I could learn from and bring back to my work. But as we got closer, there were almost no people. What we thought was the entrance near the caf_ turned out to only lead to a narrow back stair. The dynamic rhythm that we had experienced throughout the city and that had drawn us to the building suddenly stopped. The building seemed to want to separate itself from that rhythm through a void that transitioned the pedestrian to a separate, isolated experience.

After failing on our first guess at the entrance, we realized it was at the bottom of a staircase we were hoping to avoid. About 100 three foot deep steps curved down to a dark set of doors - they were the kind of steps where you are forced to step awkwardly on, starting with the same foot each time. The only people there were a middle aged couple who had stopped about half way up, apparently out of breath and needing rest and perhaps reassurance.

My wife and I endeavored to make the trip down. By the time we reached the bottom, we entered the building feeling small and unimportant _ very differently from how we were feeling just a moment ago leaving the street grid. We entered the building, looked up at the admission price, and peered into the narrow cavern through which one was supposed to go further into the museum galleries. Without saying a word, we retreated out the door and headed back up the stairs.

Knowing the waterfront was on the other side of the building, we assumed that side of the building would have more amenities and be more friendly. Unfortunately, to get there required going down an even longer and equally uncomfortable set of stairs. The stairs led to another very large empty plaza that connected to the river. The waterfront side of the building consisted of a series or blank walls, hidden nooks, a reflecting pond that looked more like a moat, and a couple more sets of stairs that seemed to lead to nowhere. Even more than the front of the museum, this side was void of amenity, and void of people.

As we continued around the building along the waterfront, we came across the only amenities on that side of the museum. There were two flat backless cement benches lined up with three scrawny trees. This area is on a promontory in the river; the building is closest to the water here and there are views up and down the very attractive riverfront. Just looking at a map, it would be easy to assume that this might be the best place in the city where people might gather, pass some time, and experience the culture, food and social life of Bilbao.

There were four people in this space. There was a middle aged tourist couple (Actually the same couple that we saw resting on the entrance steps) sitting trying to figure out their digital camera. The other two people were young men standing separately against the blank reflective walls of the building. I took a couple pictures that perfectly demonstrate a William H. Whyte quote about blank walls, how they are dead zones that contribute nothing to a place.

Only seconds after I took the pictures, the two men ran over to the couple and mugged them _ they simply grabbed the camera out of their hands and ran off. Anywhere else in Bilbao, we would have yelled something and there would have been people around to try stopping them. But instead, with no one else in sight to help, we felt isolated and vulnerable, and all we could do was watch. We later told police about it, and they told us that there are muggings in that same location very frequently.

In the span of 10 minutes that we spent around the museum, I witnessed the first mugging of my life -- and IÍve lived my entire life in New York City.

As we walked away from the museum, we tried to figure out what we had just experienced. As we got further away from the building, we were relieved to again experience what life is like without the burden of such oppressive design. We saw people starting to talk to each other again, others stopped and looked out at the water, enjoying the view. There was even a couple kissing on a bench. 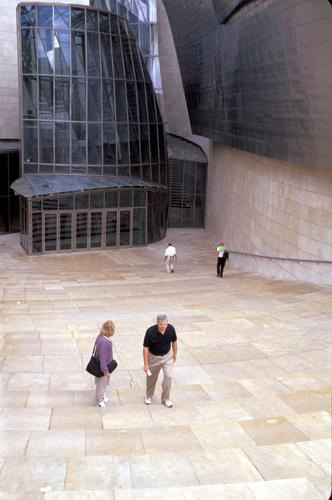 Difficult to find, the journey to the entrance is no small accomplishment for these tourists. 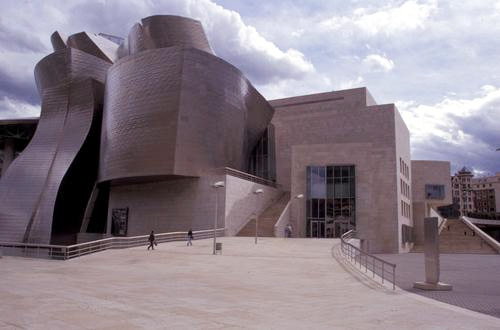 A virtually amenity free area, the building tries to distance itself from the city and and human beings that might want to come near. 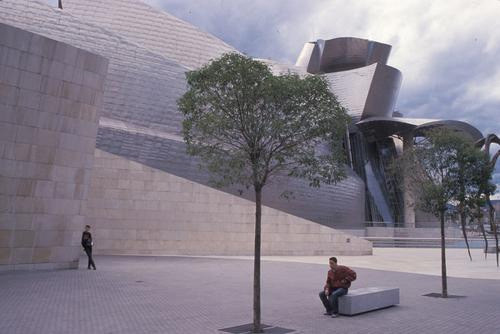 Moments after this picture was taken, these two men mugged a couple (the same couple that appeared exhausted on the entranceway steps) of their camera. 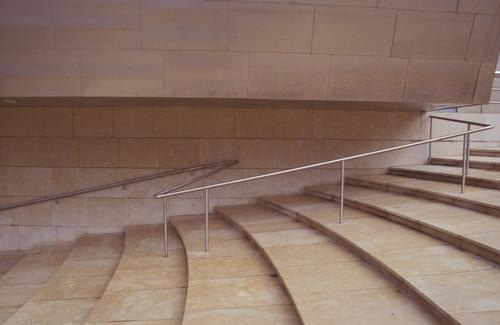 This zigzagging railing is not useful to those who need help climbing the awkwardly spaced steps. 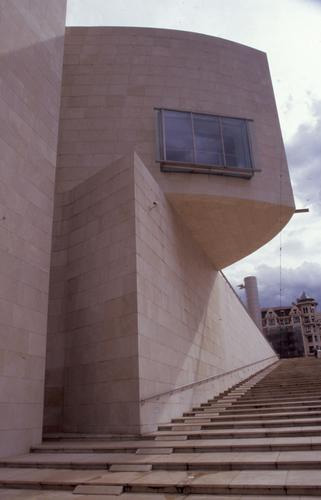 There are many dangerous nooks and the handicapped ramp is frightening. 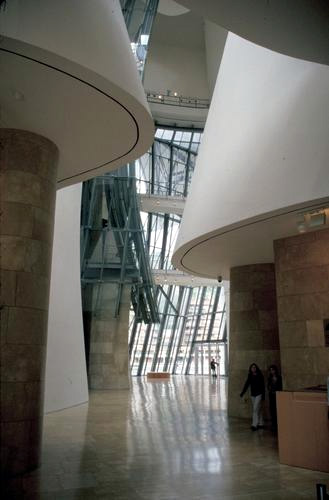 The interior spaces are equally oppressive. 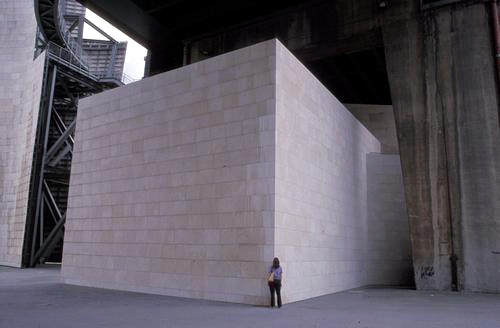 The exterior of the museum provides nothing for visitors to relate to on a human scale. 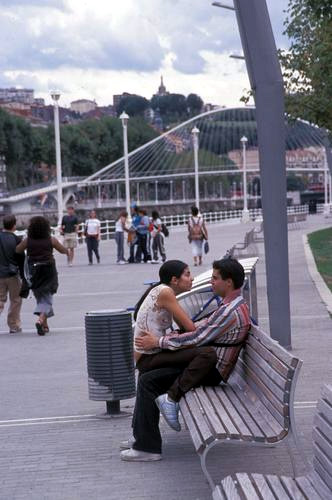 As soon as one moves away from the presence of the building, normal human activity resumes, the city comes back to life and even affection is displayed.