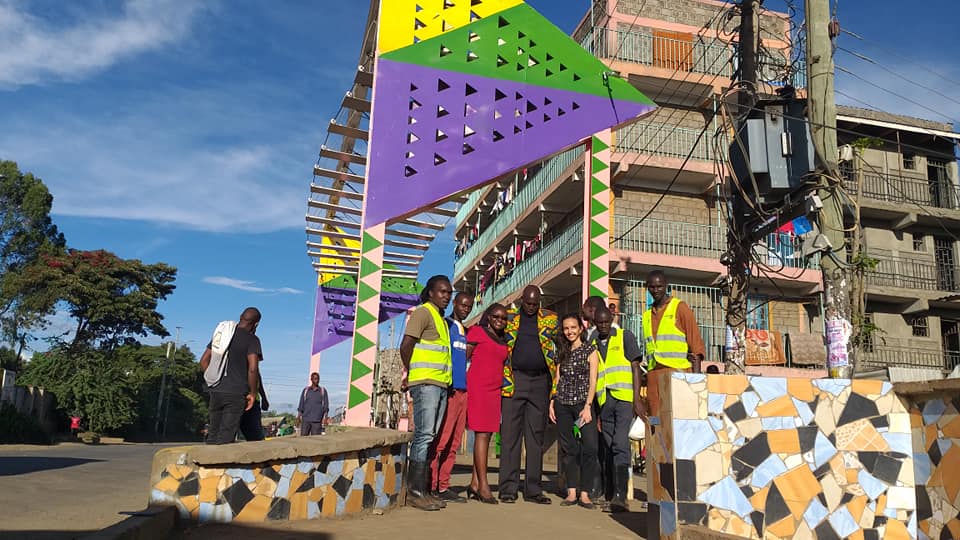 What was originally an idea from a community-based organization to beautify their troubled neighborhood of Dandora became a transformative placemaking project around a bus stop supported by a local architect and UN-Habitat.

Dandora is a suburb located about 30 minutes east of central Nairobi. It is a low-income suburb most known for its 30-acre dumpsite, which receives more than 2,000 meter tons of industrial, agricultural, medical and domestic waste per day. This site poses severe health and environmental risks to residents who live nearby, and especially to those who go to the site to scavenge to make a living due to lack of employment in the area. Studies have found that children living near the site show high rates of respiratory ailments, toxic blood lead levels, skin disorders and fatal diseases directly attributable to the dumping site. The litter has spilled out into the few public spaces where the children play. Dandora is also plagued by high levels of unemployment and crime, which has further led to a negative reputation throughout Nairobi. The bus stop discussed here is just a 10-minute walk from the dumpsite. ‍

Frustrated with the conditions plaguing their community, a group of Dandora residents banded together in 2014 and founded the Dandora Transformation League (DTL), a community-based organization whose mission is to transform Dandora into a safer, greener, and cleaner neighborhood while providing employment opportunities for youth. The organization believes that transforming public spaces can in turn transform mindsets, empower youth, and generate a more positive image of the community. DTL decided to involve the community in placemaking efforts around this particular bus stop because it sits on the intersection of two major roads and serves multiple well-used routes.

DTL led community engagement workshops on four Saturdays in October 2015 to kickstart the process, allowing the community to come together and decide the future of the area around the bus stop. The project’s funder, UN-Habitat, had entered a partnership with Mojang AB, the creator of Minecraft, the best-selling video game, to create a fun engagement tool that would make the community participation process more appealing to residents. The participants were diverse, with a good representation of young and old, those with disabilities, as well as street vendors in the area. Through these workshops, participants identified areas of concern—lack of accessibility, safety and security, lack of cleanliness, lack of leisure, and lack of greenery—as well as design solutions to address them, such as plantings, improved lighting, creativity corners, and aesthetic elements to induce pride.

Eventually, the community decided on a gateway with an arch over it which would cast a shadow over the road and create a pedestrian zebra crossing of sorts—hence the project’s name “Floating Zebra.” In addition, the community agreed to add more greenery, pave roads, and employ other measures to beautify the space.

Located on Muigai Kenyatta Road, a major road and intersection point, the bus stop is served by three matatus (Nairobi share taxi) routes: the 36, which goes to the Central Business District (CBD); the 41, which passes through Eastleigh (a Somali enclave known for its robust economy) and Gikomba (known for its market) before going on to the CBD; and the 42, which goes to the Allsops neighborhood.

The roads leading up to the bus stop had been unpaved before, becoming muddy and therefore unwalkable and dangerous during rainfall. This posed a huge problem to the residents, many of whom do not have cars and were therefore at the mercy of drivers when they sped down the road. The now paved road has clearly demarcated crosswalks, which has led to pedestrian and cyclist use that spills out onto the entire road, discouraging cars from passing through.

Prior to the project, there was no bus stop infrastructure, just a pole with no shelter or seats. Now there is a seating area with ample shade from the planted trees, which also doubles as a playspace for children. Most importantly, residents have felt safer due to the prolonged presence of people around the bus stop, especially during the nighttime. Parents now allow children to stay out and play after 8:00 PM when it previously was unsafe to do so. Local businesses have also seen increased revenue because it is now safe to stay open later. Residents reported a drop in crime, as well as an increase in cleanliness, attributable to the presence of new trash cans.

The area around the bus stop is primarily residential, but is also home to a number of small businesses, such as street food vendors, barber shops, hardware stores, a butcher, and a pub. Nearby is a primary school, churches, and banks. New businesses have now opened, including shops that rent out roller skates and bicycles to children so that they can play on the newly paved street. Most importantly, there is a dedicated play area for children, which includes swings made from recycled tires. This area is consistently maintained, whereas before it was completely covered with litter from the dump site.

The implementation of the project was also an effort to bring the community together and instill pride in their neighborhood. DTL organized “building parties” on Saturdays during the implementation phase, in which volunteers would come together and help paint, pave the road, install trash cans along the road, and plant trees. Women who were not directly involved with the physical labor handmade flags that were used to section off streets during the parties. UN-Habitat provided a bouncing castle and lunch for all those who participated.

Today, the gateway arch is not only a common meeting point and a children’s play space, but also a symbol of community pride. DTL is now continuing to build off this momentum and enthusiasm to continue maintenance and other placemaking efforts in their community. 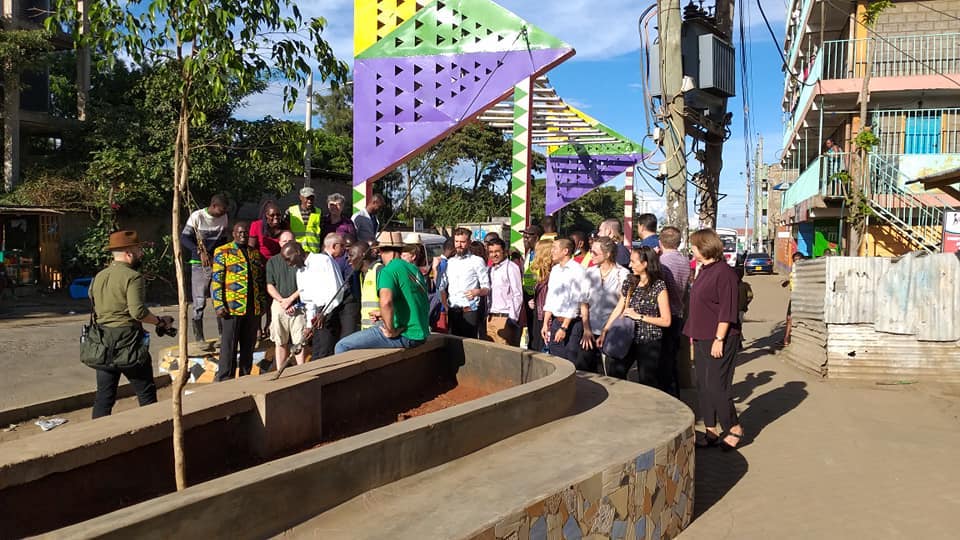 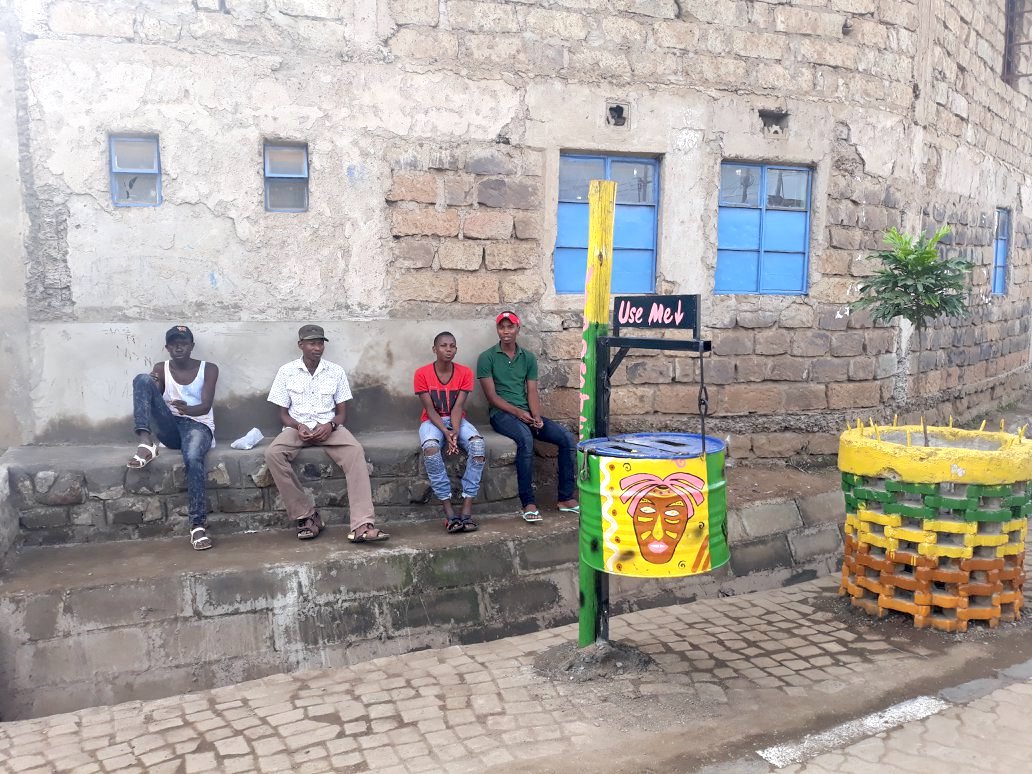 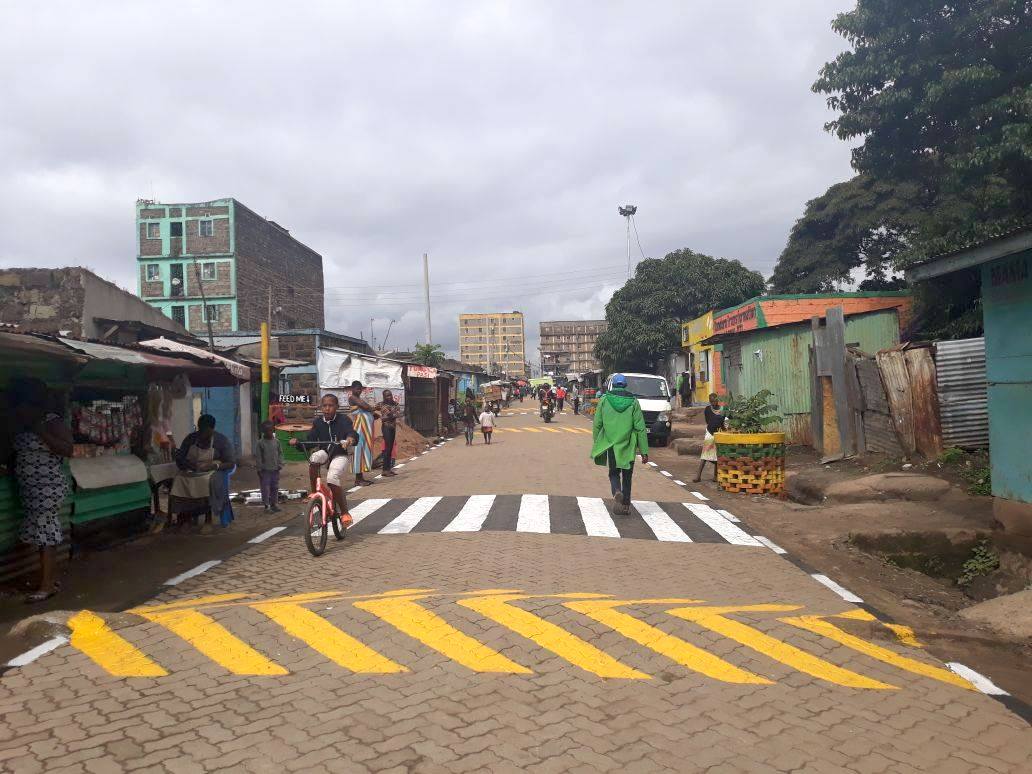 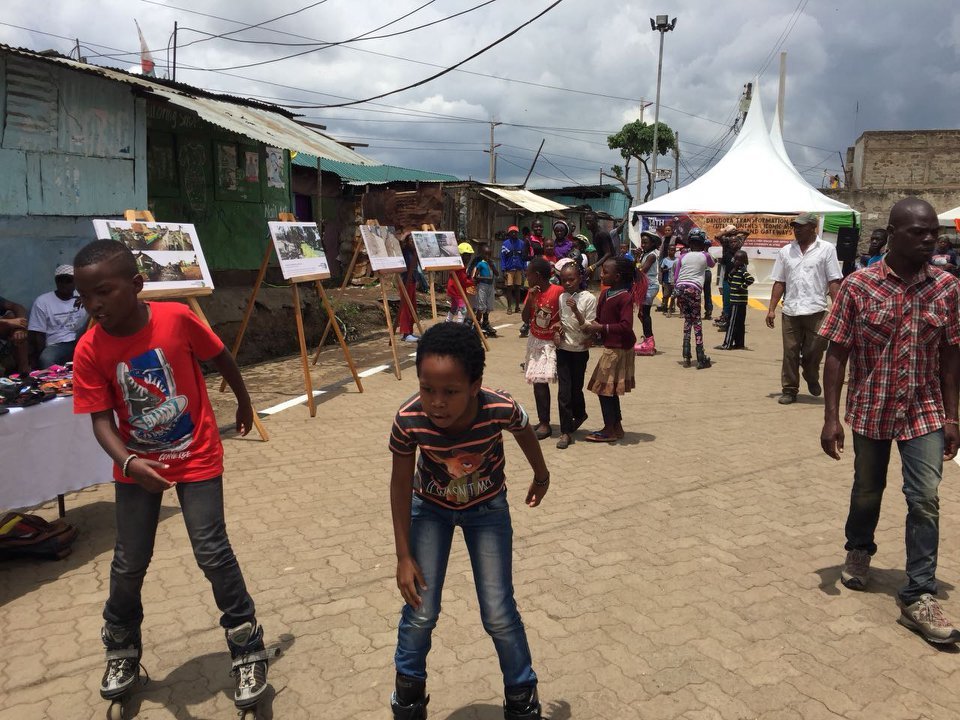