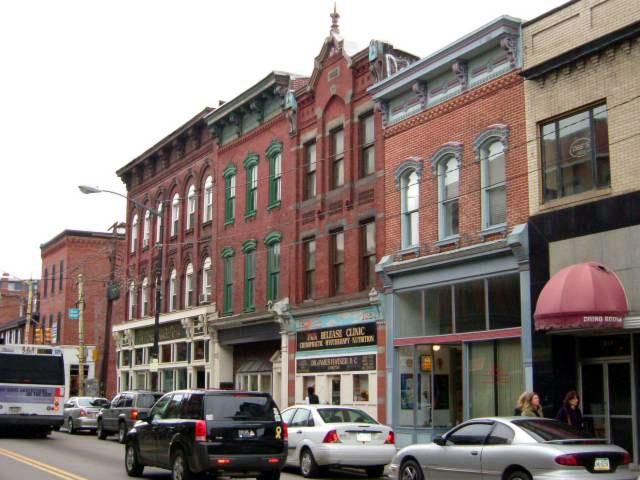 It is Pittsburgh's version of the East Village in NYC. An awesome main street with tons to do and see.

How should I begin? Carson Street is the street I grew up on. The main part of South SideÍs Carson Street is 21 blocks of everything you ever could want in your neighborhood. It is a truly urban setting that has dozens of shops, restaurants, bars, and everything else in between. East Carson Street is one of PittsburghÍs premier places to work and play. Carson is the heart of South Side, nestled between the edge of the Monongahela River and the base of the South Side Slopes; it is a picturesque place to live or visit, as well as a functional place to do business. It contains many things that make it unique to our region. Like a three mile riverfront trail, two public swimming pools, a library, and two public parks. Not to mention the dozens of mom and pop stores, dozens of bars and restaurants, art galleries, the City Theatre, neighborhood markets and every other type of business one would want in their neighborhood. East Carson Street truly is a great public space.

Carson Street is conveniently located just minutes away from downtown and Oakland, our cityÍs two largest areas. There are three bridges that span the Monongahela River from South Side, one to downtown (Tenth Street) and two to Oakland (Birmingham and Hot Metal Street). Carson Street itself is mainly a two lane street with two-to-three story Romanesque and Italianate buildings lining its sides. The sidewalks between 8th and 17th Streets are somewhat narrower than they are from 17th street on up to 29th. This is because the original plans for South Side stopped at 17th Street, but as the city grew during the Civil War, they decided to make the streets and sidewalks wider, so you get two very distinctive sections of Carson Street. Between 8th and 17th, there is parking on only the southern side of Carson, which makes that part of the street feel much more intimate as the businesses and bars are just a mere six feet from the street. Like many tightly compact urban settings, parking is a major issue in South Side and along Carson, which is why there are ten Port Authority bus routes passing through on a daily basis. Six routes go to Downtown and the other four go to Oakland. Because of this, you can reach East Carson Street from any neighborhood in the city with only taking one or two busses. The street is more of a pedestrian friendly place than an auto-friendly place because of how much window shopping that can be done. There are many businesses that have open air sidewalk-style sales during the summer. Also between May and November there is a farmersÍ market at the corner of 18th and Carson Streets every Tuesday. It gives the residents a chance to buy farm fresh produce right in the middle of our urban setting once a week.

I think anyone who enjoys an urban setting would instantly fall in love with East Carson. It is a large mix of life long residents, college students, families, and young businessmen and women. It is not unordinary to see a young tattooed twenty-something year old walking with an elderly person out for an afternoon stroll. Even with so many non-natives living on Carson there is still a strong sense of local pride. But the life long residents make the newer residents feel right at home because we welcome anybody to the neighborhood. Carson Street itself is a pretty cleanly place; there are garbage cans on every corner and people really care about the neighborhood. There has been trouble in the past with outsiders coming in and leaving the place a mess when they leave for the night. But overall the people who live there, whether they are lifers like myself, or newly moved in residents, want to keep East Carson beautiful and safe. Carson Street and South Side as a whole have always been safe neighborhoods with little crime to think of. Like every urban setting Carson has its problems, but overall it is a very safe street to be on at any time of day or night. There is a police and fire station on 18th Street and a hospital off of 22nd street, so there is definitely a strong presence of security in the neighborhood.

When you see Carson Street, you would be reminded of New YorkÍs East Village or someplace like that. I have yet to meet anyone who hasnÍt enjoyed a trip down Carson. There are two sides of Carson. By day Carson Street is a place you will see the elderly out for a walk, families out shopping, business people on their lunch breaks, and kids hanging out. There are many things to do, like go to our three book shops, catch a movie, attend a play at the City Theatre, shop at the local market, play in one of our two parks, swim in one of our two public pools, go to the library, or have a cup of joe at your favorite coffee house. By night, Carson StreetÍs jumping bar scene emerges. Seven nights a week there are always people out and about and there are always places open late, some open everyday of the year (JackÍs Bar on 12th and Carson never closes, 365 days a year it opens at 7am!). There are over 40 bars to choose from on and just off of Carson with every kind of pub imaginable. From an Irish pub (PiperÍs Pub between 18th and 19th), to a dance club (Jimmy DÍs Upstairs, between 17th and 18th), to just a chill spot (DeeÍs Caf_, between 13th and 14th), to classy (Dish, 17th Street, just off Carson), to a rock venue (NickÍs Fat City, between 16th and 17th) there is a bar or club that is right for everyone. There are also countless restaurants of every kind, from TomÍs Diner (the only 24 hour eatery on Carson), to Nakama (Japanese steakhouse), to Mallorca (our cityÍs only Spanish eatery), to Mike and TonyÍs Gyros (a hot spot for the dispersing bar crowds during the weekends), and many other places to titillate your taste buds. The shops on Carson are probably its best asset. It has thrift stores, toy stores, book shops, a magic shop, pet stores, candy stores, ethnic stores, sports stores, record shops, beauty salons, tattoo parlors, and so much more. You could honestly live your whole life on East Carson Street and have everything you ever needed without ever leaving it.

The overall mood of the people I would say is energetic and proud. It takes a special kind of person to live on Carson. Most people are pretty cool towards one another, except when it comes to parking! The people of South Side have always guarded their spaces like fortresses by using any means necessary, by that I mean placing everything from cones to chairs to shrubbery out on the street where their space is for their car to protect it from being taken. It may seem a little odd to out-of-towners who have never seen such tactics, but here it is a way of life. As I stated early, there is definitely a sense of local pride here. People from East Carson and South Side are very proud of our rich history and local status as the most happening neighborhood in the city. But we do welcome people who are not from around here, as there are probably more college students who are not from South Side (or even Pittsburgh for that matter) who live here than there are locals. Without those students, we wouldnÍt have the dynamic and wonderful neighborhood we have today. East Carson is definitely a meeting place among college students and everyone else alike. On any given weekend I say it would be safe to bet that most students from our five universities and two colleges in our city go to East Carson Street for a good time out. 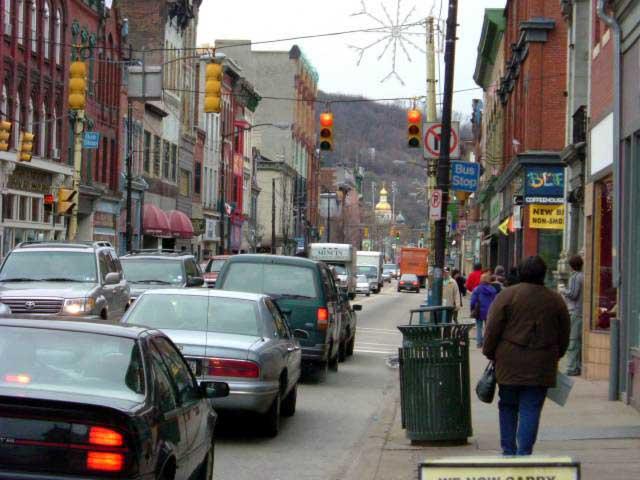