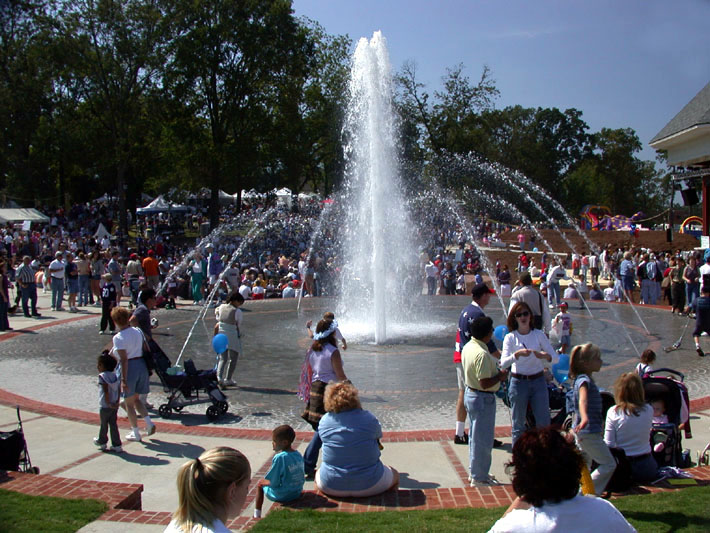 A cascading series of green terraces that terminate in front of a Victorian style performance stage and community center.

Town Green is a cascading series of green terraces that terminate in the center of the park in front of a Victorian style performance stage and community center. Visible from any point within the Green is the Pavilion stage with outdoor seating space that can accommodate up to 10,000 people. An amphitheater directly in front of the stage is designed like a theater-in-the_round with a central patio positioned as a secondary stage for smaller, more intimate events. A dance floor, with an orchestra pit is in front of the Pavilion stage.

The Green is in the middle of the downtown business district and is surrounded by the back of the Main Street stores, new condominiums, Taylor Park and the City Hall. A major East-West transportation corridor passes between the front of City Hall and the Town Green. Everyone who passes through Duluth gets to see the dramatic view down the sloping grass Green to the 70Í water fountain. City sidewalks enter the park from all sidewalks and connect to an oval walkway that connects to the central interactive fountain. No one can pass through the park without getting involved with or making contact with this exciting feature of the space. Local residential areas are connected via the sidewalk system. The main walls are reinforced for vehicular use when setting up Festival and other events in the park.

As soon as you enter the park, the water spout is visible from all angles. The sound of the splash can be heard throughout the space. The amphitheater stage is visible from every spot inside the park. The amphitheater is designed to function as a theater but not feel like a theater when it is empty. People use the amphitheater for picnics, small parties and sunning lawns. All the walls in the park are 18" high for seating during large events, but are spaced so patrons can bring chairs, blankets, cushions, or lounges to lie out and enjoy the space. The City Hall looks down on the space and the Police Department is across the street. Duluth has added bicycle and horse mounted police just for the Town Green. The space feels very safe because it is not bordered by traffic or roads. It is enveloped by structure, and it slopes to the center. Mothers are so comfortable that they let their children run free.

The Town Green has been in place for over a year and has had dramatic impact on the identity of the City and the attitude of its citizens. Since its completion, various large and small events have taken place in the space that has created lasting impressions on the citizens. ´ The annual Fall Festival now has a highly functional space to accommodate the over 40,000 visitors that attend the three day event. The space helps accommodate over 100 tents and food service set-ups. The amphitheater provides continuous entertainment for thousands of patrons spread out in the amphitheater. ´ The City has begun to stage concerts and events continuously in the amphitheater including the highlight event of a "Three Dog Night" concert that drew over 10,000 people onto the Green. ´ Citizens have chosen the Green to hold weddings, family reunions, and birthday parties. ´ The interactive fountain has become a greater attraction to adolescent youth than the swimming pool. ´ Local families meet at the Green with a local photographer to make their Christmas card pictures. ´ The senior class of Duluth High School chose the park for their prom picture set-up. The school also organized their graduation to take place in the park. ´ A "dinner theater" on the Green is planned to open next year. ´ The local "Aurora Theater" performs an annual play for the community. ´ The High School has moved its Annual "Peach Farm Jazz Festival" from the football field to the Town Green. ´ High school and middle school children hang out at the green after school. ´ Orchestra students practice under the gazebo as they wait for lessons at HuffmanÍs Violin Shop. ´ An annual Christmas Tree Lighting, Easter Egg Hunt and July 4th fireworks event have been established on the Green. ´ The city set up an ice skating rink and Winter Wonderland Carnival for three months. It drew thousands of Georgians who had never ice skated outdoors. ´ A series of movies called "Flicks on the Bricks" occur every other Saturday night during the summer. ´ This continuous influx of people has prompted the opening of a soda shop to capture the market.

Citizens of Duluth now bring their friends to the Town Green and point at it with pride as the identity of their City. The Town Green has had the profound effect of bringing the citizens of suburban Duluth into the center of town to a special place and providing a venue where citizens can interact and reconnect as a community. What was a dilapidated group of old repair shops and a parking lot is now a green oasis and rest spot. It feels good to be there whether you are alone or at a large gathering. It has become the social backyard/playground for the community. DuluthÍs Green epitomizes the way to recreate a sense of community and place that will lead to the renaissance of a small town. Businesses are returning; new residential units are being developed, activity is increasing and the center of town is once again "the place to be." DuluthÍs Town Green permanently connects citizens to a special place in their own special community.

The town of Duluth, Georgia (23,000 people) has begun a renovation of their downtown. Built on the railroad and fueled by cotton, Duluth once exemplified a typical turn-of-the-century North Georgia town. Daily life did not change much in this part of rural Gwinnett County. Then, the rapid growth and suburban sprawl of neighboring Atlanta began to encroach northward. In the 1960s, increased traffic demand lead to the widening and improvements of what is known today as Buford Highway. Traffic flow was redirected from DuluthÍs old downtown along a more direct route. The old business district was bypassed and, consequently, storefronts did not fall victim to strip mall and quick-stop developments that sprang up along Buford Highway. In the 1980s and '90s, housing developments began to engulf open land around the old core of Duluth. Before long, the townÍs downtown was an island in the midst of a sea of expanding growth. DuluthÍs downtown district remained virtually unchanged during this growth period. However, increased traffic volume through the old town put pressure on city officials. Historic buildings were beginning to fall in disrepair and rental demand was dropping. Repair shops and industrial businesses were taking over buildings and changing downtownÍs business mix. DuluthÍs leaders decided to revitalize their townÍs downtown. It still had a lot of character, but the core of Duluth had no life, no identity and no image. Professional consultants were hired. The Landscape Architects developed a visionary plan for revitalization of DuluthÍs downtown into a town center. Citizens wanted to retain the townÍs historical character and add a Town Green as the central focal point. Downtown was to be redefined into a gathering place and activity center. Success would depend on creating a "sense of place" that would reverse the downward spiral of land values and spawn redevelopment of dilapidated adjacent parcels. The Landscape Architect was charged with creating a Town Green to meet the needs of the citizens, accommodate the Fall Festival and spark adjacent residential and commercial development. The Green had to become the "Central Park" of Duluth and be more than just a static look-at space. It had to be a functional space able to accommodate large events and also attract individual users. It had to generate activity and excitement, as well as be a quiet and calm place of respite. The balance of these needs had to be carefully orchestrated so neither one would dominate the other. Duluth Town Green has received numerous awards since its completion in 2002: 2002 Best Outdoor Venue by Gwinnett Magazine 2002 Municipality of the Year by Gwinnett Clean & Beautiful 2003 One of Ten Best Places to Call Home by Atlanta Magazine 2003 One of Ten Cities of Excellence by Georgia Municipal Association 2003 One of Eight Cities Selected for Walkable Communities Workshop 2003 Georgia Chapter _ American Society of Landscape Architects Numerous articles have been written about the Town Green: Land Development Magazine by National Association of Home Builders Horizon Section and Local/State Section of the Atlanta Journal Constitution Gwinnett Magazine January/February 2003 Issue Georgia Trend Magazine May 2003 Issue 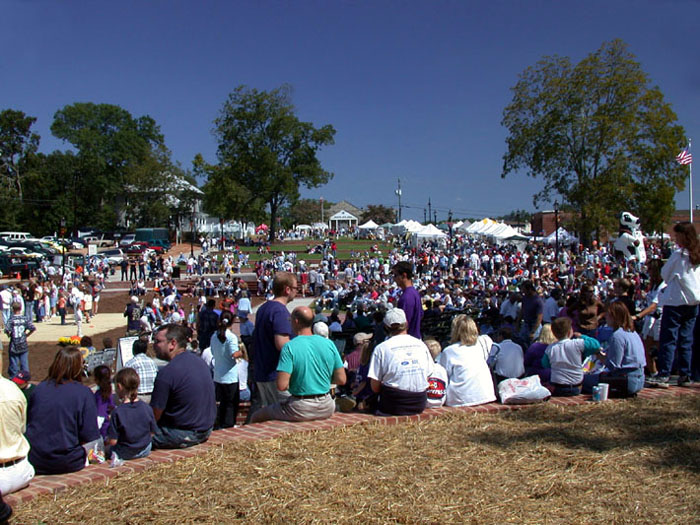 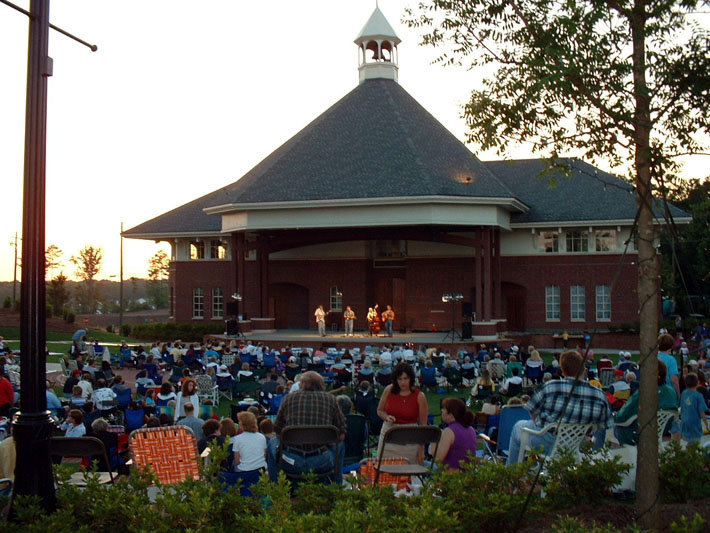 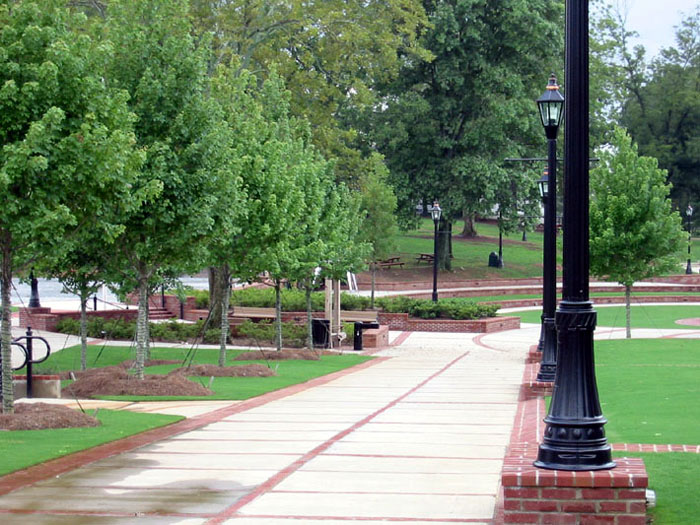 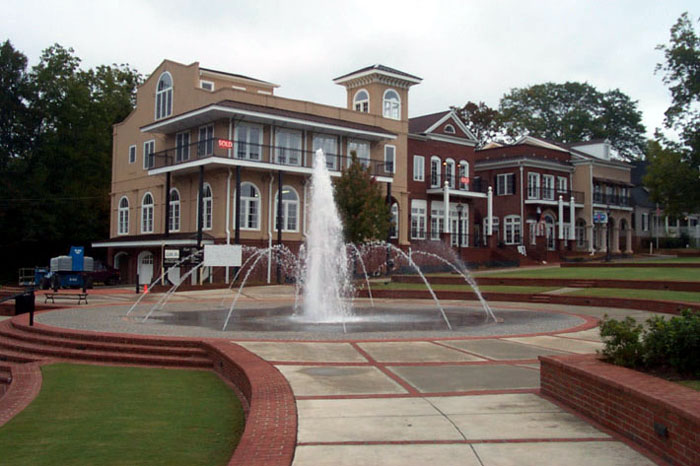 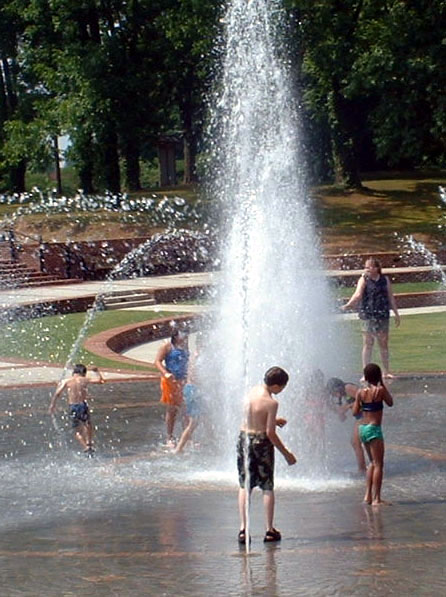 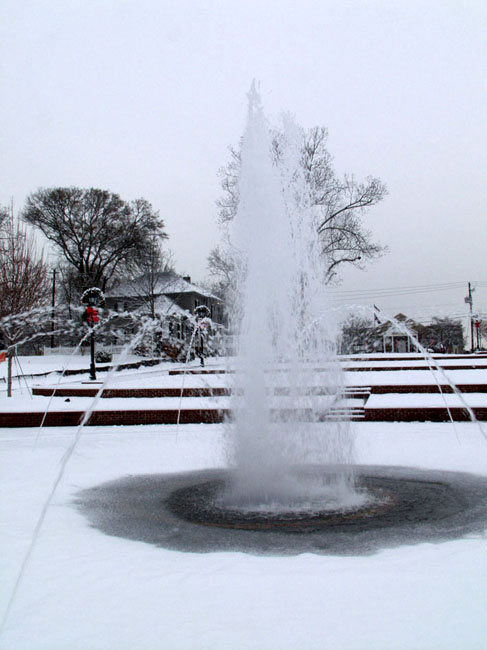 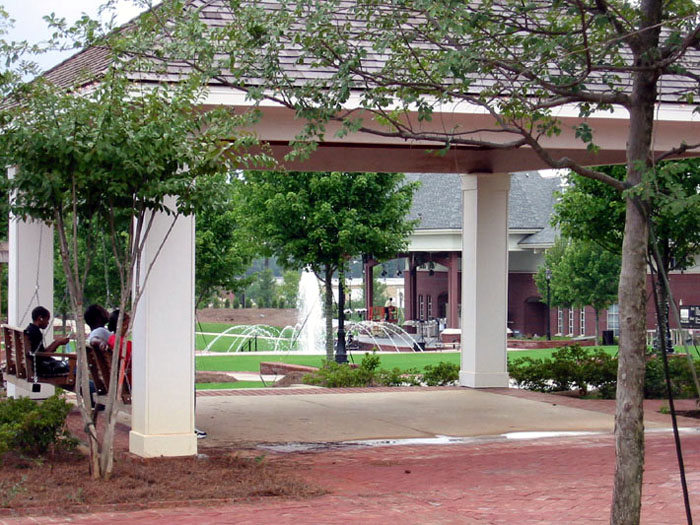