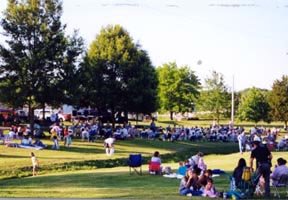 This park is the heart of its once-rural community.

Not only does Central Park provide a variety of activities for those who live in the immediate area, but it has also become a drawing card for families throughout Broken Arrow. Like so many suburban cities, Broken Arrow has fought the image of a "bedroom community." Those residents who take advantage of the facilities and programs offered at Central Park are drawn to the heart of our community. They help keep the downtown area alive and well and they are given a constant reminder that they live in Broken Arrow, not Tulsa.

One of the primary missions of the Parks & Recreation Department is to maintain the image of Central Park as a park for the people. There are two main entrances from Main Street, but there are also entrances from the neighborhoods on all sides of the park. Many generations in those neighborhoods have grown up walking to Central Park and playing ball, playing in the creek or just sitting around in the shade. Just south and on the east side of Main Street is a small strip shopping center, with a couple of restaurants, a convenience store and more.

City buses are available to bring residents to the Community Center and to The Main Place for senior citizens just a few blocks to the south. Park planners do not like asphalt, but parking has been provided in just the right places at Central Park, with plenty of room still preserved for people and activities.

The new Family Aquatic Center and bath house can be used by up to 700 swimmers at any one time, but it was designed in such a way that those using the Community Center facilities, the new Heritage Land playground or the picnic areas will not be bothered by the traffic or noise. Likewise, the girls softball complex may be bulging at the seams, but the complex was planned for an area where the activity and the parking would not interfere with other park users.

The Community Center is home to the City's Parks & Recreation Department offices, as well as small meeting rooms, basketball courts, restrooms and even a small kitchen area. Landscaping in Central Park and around the Community Center is a project the staff address with pride and professionalism. Within a few days after a major event, Park & Recreation crews and Public Works have everything cleaned up and back to normal.

When it gets close to December, thousands of lights and beautiful seasonal displays will bring even more area residents to Central Park after dark, following the roads to new discoveries.

Central Park provides recreation opportunities that rate with the best in the biggest cities. And yet it's not at all unusual to find a young couple sitting quietly under a shade tree; or an older couple with grandchildren looking for crawdads or tadpoles in the creek. On Veterans Day you'll find a group of men and women circled around our memorial area, quietly sharing stories of loved ones who died in the service of our country. While kids are going through their tumbling routines, you'll find senior citizens walking around the edge of the gym getting in their exercise.

Expansion of the Community Center enabled many more programs to be offered through the Parks & Recreation Department, with care to offer companion programs involving kids. For instance, new programs for women in volleyball, exercise, etc., are offered with programs at the same time for their children (tumbling, music, etc.) The number of basketball courts available tripled; the City has carefully protected the needs of those who simply want open gym time in addition to league play.

Those expanded facilities have enabled Central Park to host not only the City's 70-year old Chamber of Commerce "Rooster Days" event, a four-day long festival which draws thousands of visitors, but also smaller events such as an Indian Art Show, Irish-American festival, arts and crafts festivals, Chamber of Commerce Trade Show, health fairs for city employees, free summer concerts, and much more.

The new Heritage Land playground was not specifically designed for those with special physical needs, but to also serve both those without special physical challenges. Now no one has to be separated from friends or family while playing. The playground brings busloads of children in from communities as far away as 60 miles.

Other facilities include newly refurbished tennis courts, and the new Family Aquatic Center and bath house. These facilities offer both free time and lessons.

Whether you're one of several thousand at Central Park during Rooster Days, or sitting on a blanket with a good book and something cool to drink, City planners have worked hard to be certain that you can mix and mingle with others in a safe, beautiful place. Central Park brings together so much of Broken Arrow's history, its present and its future. It serves to bring together individuals and families from all areas of the community, and from other communities in our area. People who might not ever say a word to each other at work or at school or at the mall find they have many common interests as they sit next to each other at concerts, play together in our gyms and playgrounds or simply toss a Frisbee around in Central Park.

The 27-acre park was created initially when the city was a small, mostly-rural community southeast of Tulsa. The park was located on what was then the south end of Main Street, with only a few modest housing additions to its west, south and north. While mostly used during those first years for picnics and an occasional community program or festival, Central Park had plenty of room to grow. In the mid-1960s an expressway from Tulsa to Broken Arrow was built, and the town's population exploded from 10,000 to nearly 80,000 today.

Over the years a modest swimming pool was added to Central Park, as were a Community Center with one full-length basketball court (also used for volleyball, pickle ball and other activities), a girls' fast-pitch softball four-plex and a small block of tennis courts.

With public support in recent bond issues, Central Park has been expanded with an extension to the Community Center (more than doubling its size), Heritage Playground (equipment designed for children with special needs and those without), a memorial to those residents who were killed in war and, most recently, a Family Aquatic Center. 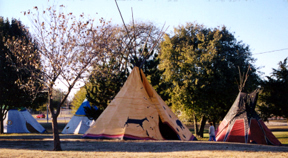 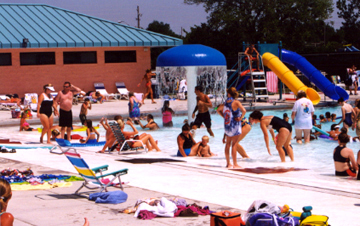 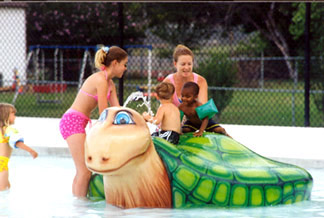 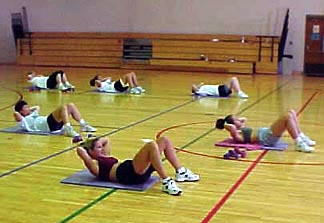