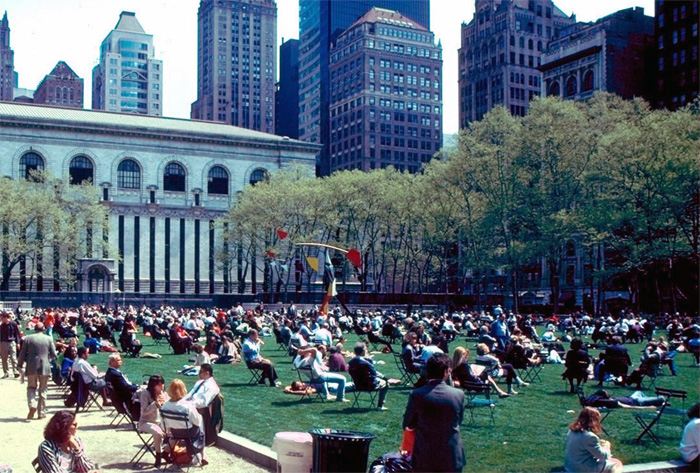 The eight acres of this elegant, welcoming park are built on top of the stacks of the New York Public Library next door.

Since its restoration in the 1980s, Bryant Park, originally built a hundred years earlier, has become one of the best "new" urban parks in America. Its overall design and elements support a range of activities and uses for people who work, shop, or live nearby, as well as those who are just visiting. The park's center is a three-acre open green surrounded by tall, arching trees. Kiosks at its northwest corner offer coffee and light meals, and directly behind the library on the east side is Bryant Park Grill, an indoor restaurant with outdoor and roof-deck dining. More than 1000 lightweight chairs can be moved throughout the park during good weather; visitors can rent pieces for chess and backgammon tables from the New York Chess and Backgammon Club. Other attractions include flower gardens, a fountain at the west end of the park, and a variety of vantage points from which to just sit and watch the world go by.

The park is managed by the Bryant Park Restoration Corporation is an innovative organization responsible for a multitude of park activities and events, as well as ongoing security, maintenance, and marketing. The park's hosting of large-scale, ongoing events like the Barnum and Bailey Circus or the bi-annual Seventh on Sixth fashion shows, however, has caused some controversy as to whether this type of commercial use is appropriate for a small urban park.

The site where Bryant Park and the New York Public Library stand was once occupied by a reservoir and public square called, aptly enough, Reservoir Square, and held a replica of the World's Fair Crystal Palace in 1853 - the original was erected in London. The square became known as Bryant Park in 1884, in honor of William Cullen Bryant, but its full potential was not recognized until later. The library was built in 1911, and it was perhaps its cultural prominence that led the New York Times to note, in 1928, that Bryant Park was "even more in the public eye of New York than Central Park or any other park in our city." The newspaper predicted that with the right planning, the park could be transformed "from a barren dump into one of the city's most attractive breathing spots."

Bryant Park was rebuilt in 1934 under the direction of Robert Moses, Commissioner of the New York City Parks Department. Because of the stacks of the library located beneath it, The park was raised above the surrounding busy streets and conceived of as an "urban sanctuary." However, this design created isolation - and invited crime. The park grew to become a haven for drug dealing and other negative activities. After analysis by urbanologist William H. Whyte and Project for Public Spaces in 1981 - their report was titled Intimidation or Recreation - a plan for Bryant Park's reconstruction was developed. It addressed issues such as opening the park's constricted entrances and removing hedges along its perimeter so that people could more easily view the interior from the sidewalk, and adding semi-commercial uses such as a food and beverage kiosks and a ticket stand. While construction began in 1982, it was not completed until ten years later.

At the same time, the Bryant Park Restoration Corporation was formed out of a new concept for managing the park. The Corporation's objective was to maintain the park's oasis-like atmosphere while opening it up to new people and new uses. It was also responsible for all management-related activities in the park. The restored park's success and its increased use is due, in large part, to this management. The park hosts frequent events, festivals, including free concerts and performances, to attract the business crowd in Midtown; one of the most popular programs is the summer movie festival. The Corporation has also established partnerships with adjacent corporations: for example, HBO provides a large-screen television in the park for viewing sporting events.

Uniformed security guards and maintenance personnel not only provide upkeep, but their presence also discourages crime and vandalism by making it clear that the park is important and cared-for. In a sense, the park is self-enforcing. The increased access and visibility of the park, improved lighting, and signage which states park rules and regulations as to conduct and opening and closing hours, have all contributed to making the park safer. According to the Bryant Park Restoration Corporation, in 1979, 150 robberies occurred in Bryant Park. And since 1981, there has been one. The four New York City police originally assigned to the park have since been relocated.

Bryant Park's success has spread to the rest of the neighborhood as well. In the two years after its renovation, rental activity around the park increased by 60 percent: A place once considered to be a deterrent to renters is now, according to some real estate agents, a marketing tool. 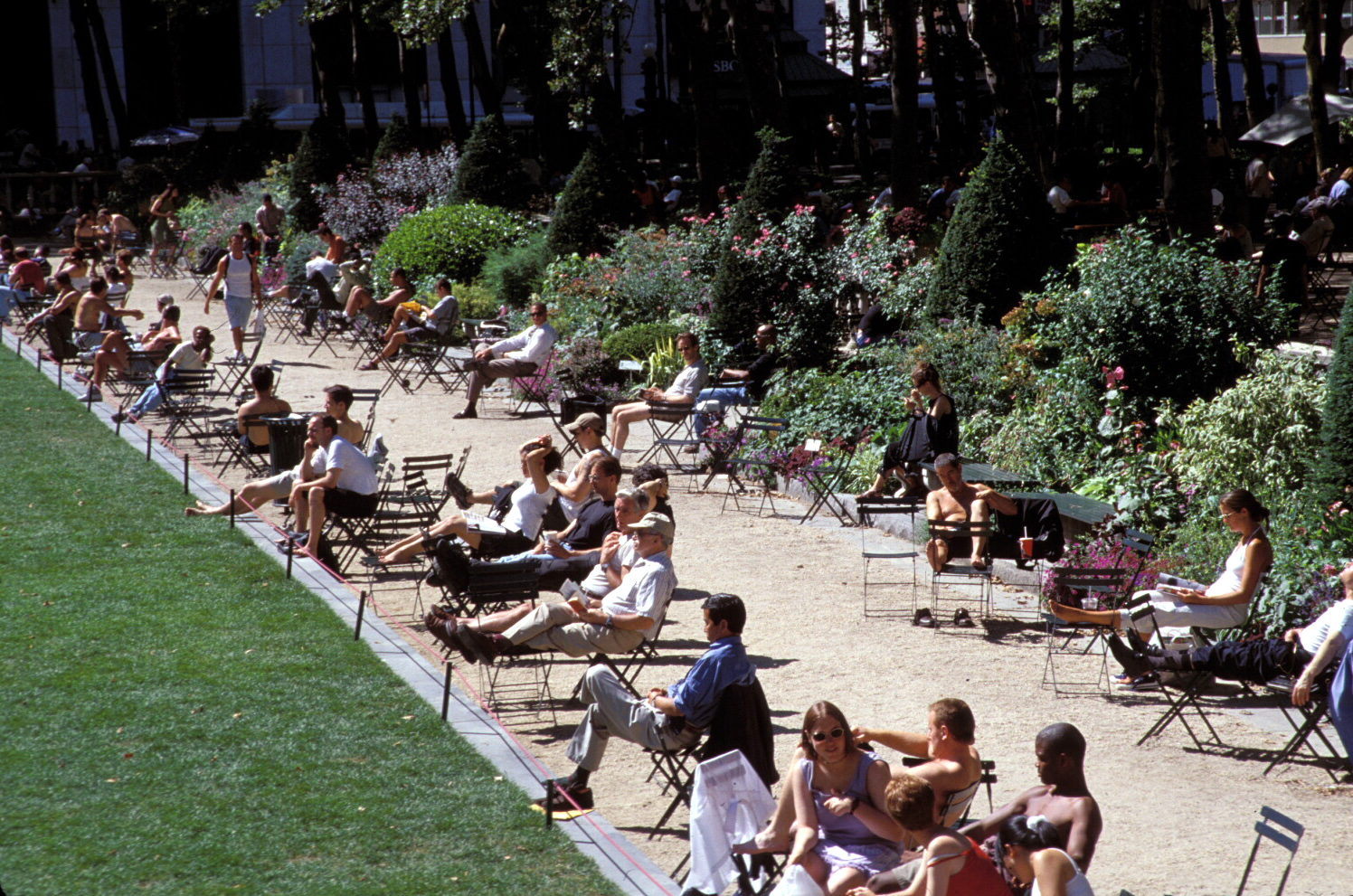 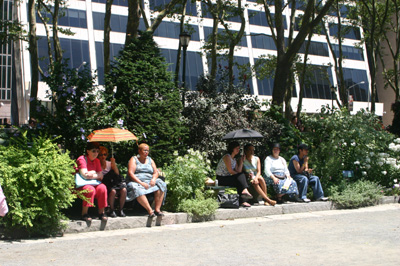 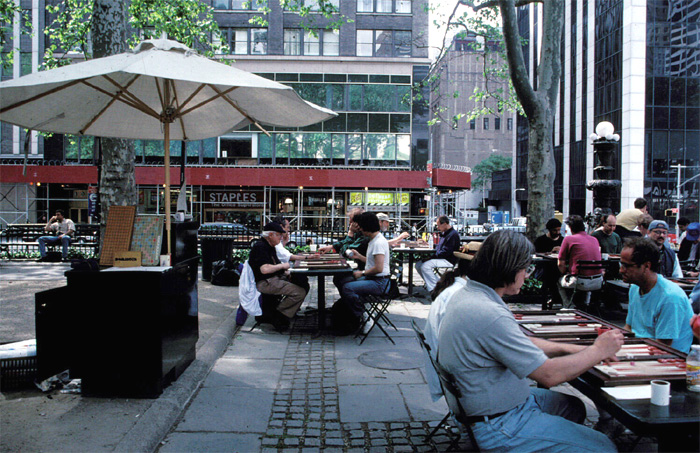 Chess and backgammon pieces can be rented. 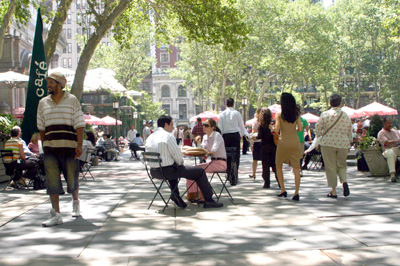 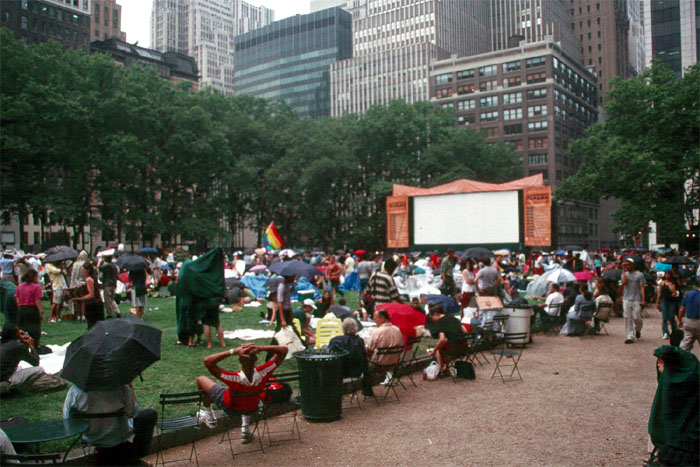 The Monday night movies, shown all summer long, are the place to be...even in the rain! 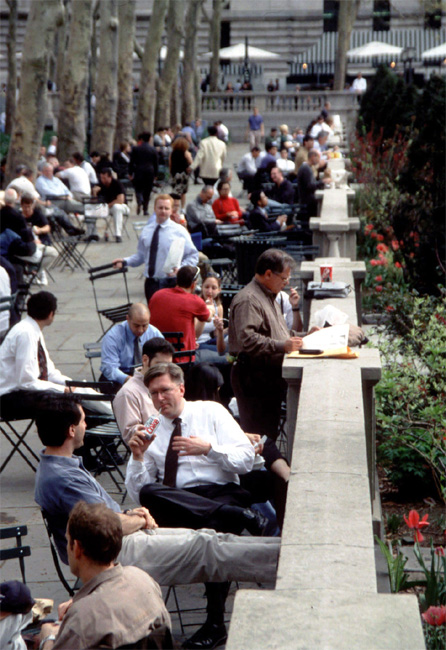 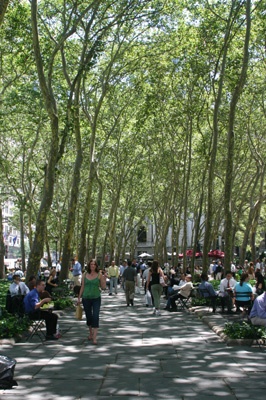 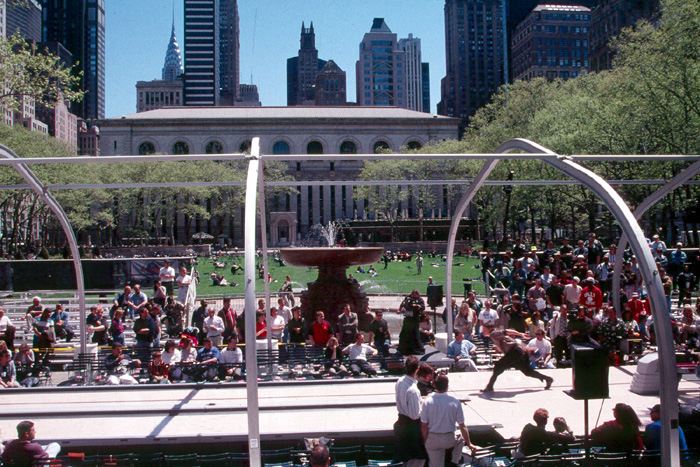