When we began working in the Bulgarian capital of Sofia nearly a decade ago, the country was still in the wake of a massive generational transformation from life in a communist country to one of greater freedom, but also uncertainty. Reconstructing civil society played a major role in that transformation, and placemaking projects in Sofia helped flex those civic muscles and expand the conversation about urban values, ideas, and design. The discussions were inspired and dynamic, with many opinions and voices, yet change did not come quickly.

So it is exciting to see that placemaking in Bulgaria has taken root beyond the capital in smaller, nimbler cities, thanks in no small part to BG Be Active, a Bulgarian nonprofit organization that promotes active lifestyles and active citizenship. Since 2016, placemaking has become one of the key ways that they achieve this mission, supporting the creation or renovation of 20 public places in 20 different communities across the country. The organization is also the steward of a budding regional placemaking network in Bulgaria, where local activists can share resources, learn and collaborate.

The following three projects are a part of BG Be Active’s initiative “The Spot,” the first nationwide placemaking program in Bulgaria “committed to improving public spaces, investing in new and different places that meet the needs of local residents, building the capacity of the groups involved, and actively engaging young people from idea to realization for the sake of sustainability and responsibility for its conservation.” Each project brings together an inspiring combination of eye-catching aesthetics, a lighter, quicker, cheaper approach to activation, and clear public benefits tailored to the local community.

What do you do with an abandoned, decommissioned airplane? Turn it into a great public space, of course! All it took in Silistra, a small town in an area of Bulgaria facing a shrinking population, was adding some new uses and amenities to make this declining yet intriguing eyesore into a destination. Read more.

In a neighborhood where a large number of visually impaired residents felt uncomfortable leaving their houses and had nowhere to go, local activists used lighter, quicker, cheaper improvements to create a safe and accessible social space for the community. Read more.

Playgrounds and sports fields are all well and good, but don’t youth deserve an outdoor social gathering space, too? A youth council in the city of Shumen worked with a local design studio to bring one to life inside a geodesic dome. Read more.

SUBMIT YOUR OWN GREAT PUBLIC SPACE

Anyone can submit their own favorite public space to our international Great Public Spaces database, and we want to hear about yours! Simply visit the database homepage and click the “Nominate a Great Place” button. 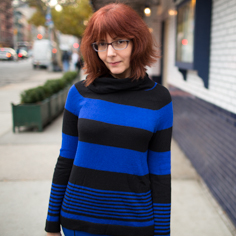 Great Waterfronts of the World