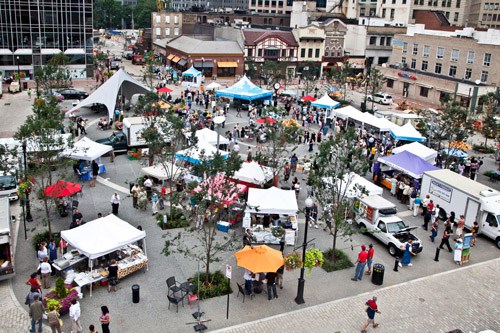 Market Square is a unique jewel situated at the center of the business and cultural districts in downtown Pittsburgh. The square has played a central role in Pittsburgh’s history, once housing the Allegheny County Courthouse and the “Diamond Market,” where Pittsburgh residents came to shop, eat, and even roller skate on the top floor, until it was demolished in 1961.  The market was unique in the sense that it spanned four separate blocks at the intersection of two major streets.

Sadly, huge chunks of Pittsburgh’s bustling downtown waterfront were cleared for a new park and sterile office complex as part of a dubious urban renewal plan. Several of the city’s most historic central neighborhoods, including Old Allegheny Center and The Hill, were completely leveled, scattering many of the market’s customers to suburbs and public housing complexes on the edges of the city.

PPS facilitated a public Placemaking workshop with neighborhood groups and individuals to generate ideas for uses and activities that will form the program for the future design and management of the square. Some short-term recommendations that came from the workshops included reducing the foliage around the perimeter of the square in order to increase sightlines, promoting a feeling of openness and safety, widening sidewalks for outdoor cafes, installing lighting in trees and adding movable seating. Events and programming were also recommended such as an improved farmers market with upgraded stalls and a more diverse selection of products available; special events and performances, and street performers.

Long-term recommendations included rebuilding the stage in a more appropriate location as a retractable structure with a tented shelter; repaving the entire square to be at the same level all around which would promote access from surrounding businesses and sidewalks;  and constructing archways into the square from all arteries. A plan for a public/private partnership to oversee management, programming, future improvements, marketing, etc. was also suggested to foster the changes necessary for the square to realize its potential.

Participants in the workshop said Market Square needed more things to see and do. Since then, physical changes combined with features like a farmer’s market and concert series have helped turn the square into an extremely popular spot for downtown office workers to gather on lunch breaks or after work. A robust schedule of activities, from a Carnegie Library–run reading room to the annual Zombie Fest celebrating the city’s status as the setting for director George Romero’s “Living Dead” movies, has made Market Square a favorite destination for residents across the metropolitan area.

When PPS got involved in the planning process for Market Square in 2006, the site had already been through numerous re-workings, none of which managed to revive its former status as a gathering place. Working with the city’s Downtown Partnership, PPS facilitated a public placemaking workshop with neighborhood residents and organizations to generate ideas about uses and activities that would inform the future design and management of the square. The process led to an opening up of the square—which included closing several streets that ran through its center—to create a more welcoming space. In October 2010, Pittsburgh Market Square opened to great fanfare. This process created a continuous piazza-style square instead of four isolated quadrants, which sparked more activity at the heart of the space rather than pushing it to the corners to make way for automobile traffic.

By focusing on programming rather than a dramatic redesign, Market Square has once again become a major gathering space for Pittsburghers. On a recent Saturday afternoon, even with no events in progress, the square was packed with people sitting, talking, playing, and enjoying each other’s company.  It’s a great illustration of  the spillover effect of public space management: once people have a chance to experience a space’s unique character, they’ll find their own reasons to come back.

The Downtown Partnership has continued to make improvements in Market Square, drawing on substantial support from public, private and non-profit agencies, as well as developers and local foundations. Significant improvements have been made to Market Square and the full redesign utilized many of PPS' recommendations and plans to create an anchor for the city's downtown. 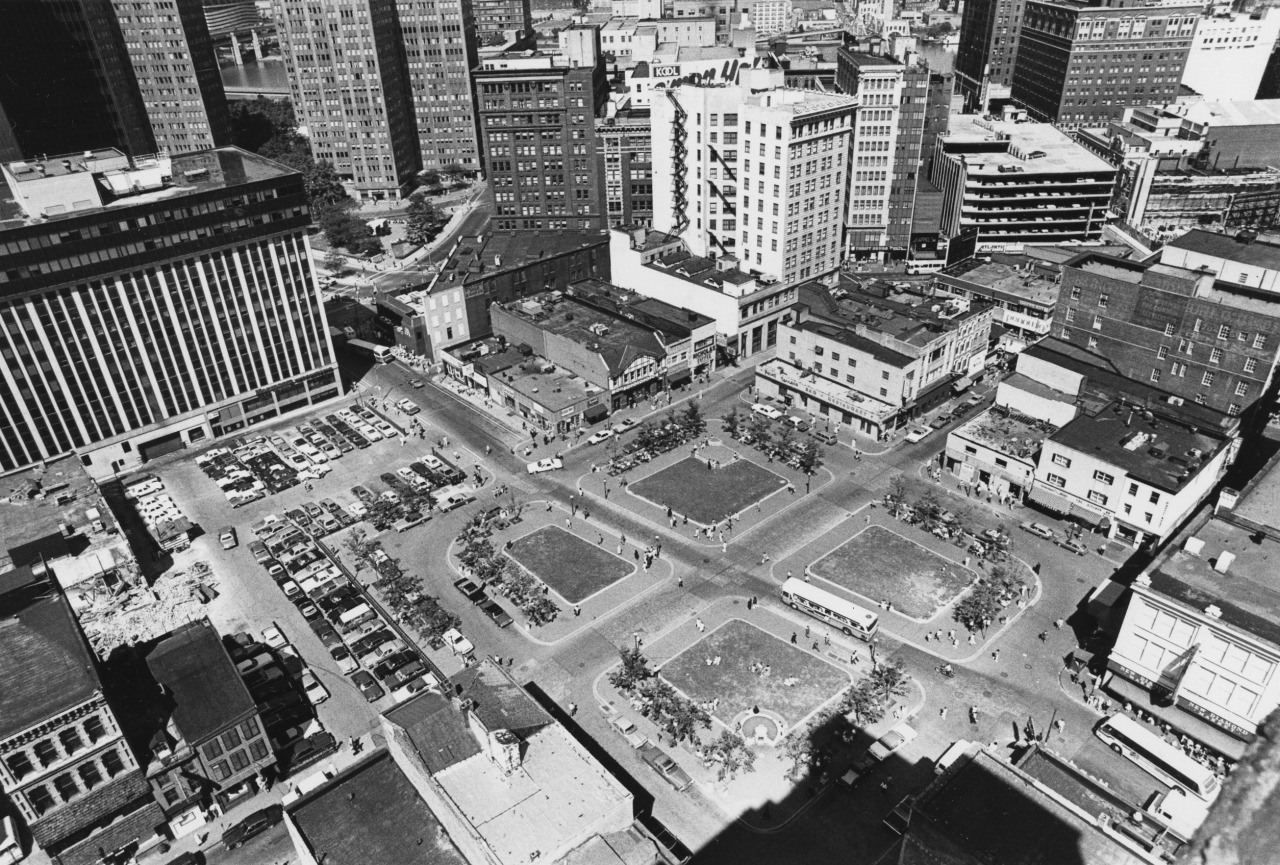 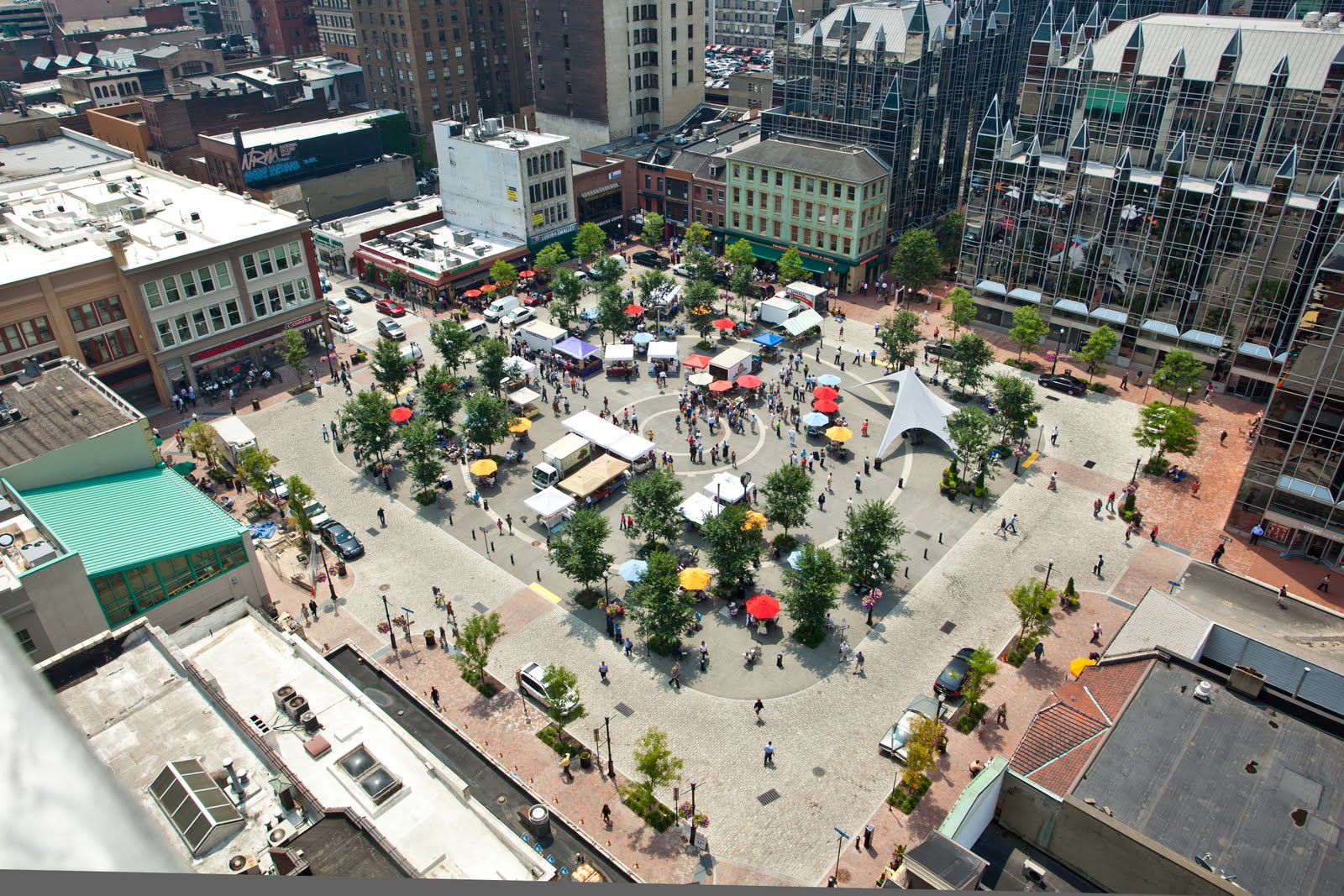 The center of the square is used for farmers markets and other events. Photo Credit: Market Square PGH Blog
Related Articles & Resources