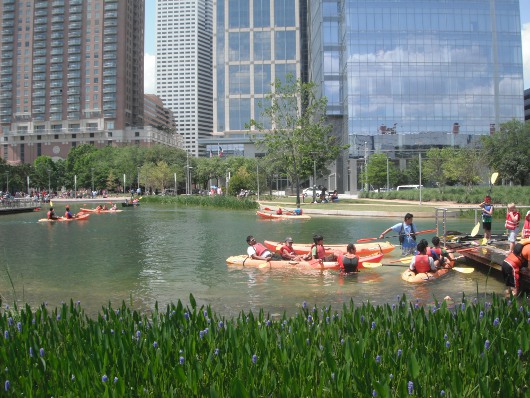 All of this was hard to imagine a few years earlier. When PPS began work with the Houston Downtown Park Conservancy in 2004, many were skeptical that anyone would come to a public space in downtown Houston.

Downtown Houston had long been characterized as a district of office towers. “The streets felt like concrete canyons,” says Ric Campo, chairman of Houston First, a local government corporation that operates convention and performing arts venues in the city. “There were parking garages and homeless people and no trees.”

Wide, treeless one-way streets lined with blank walls and reflective glass created a “pedestrian-free” environment downtown. Office workers were driven to spend lunch breaks in the tunnel system—a kind of underground shopping mall connecting office buildings. After 5 p.m., those workers typically left downtown for their homes in the suburbs. It was hard to imagine that they would actually drive home, pick-up their kids and spouses and return to Discovery Green for events, performances, or simply yoga.

Discovery Green was conceived by several local philanthropists who saw great potential in an undeveloped swath of land in front of the convention center. They banded together to form the Houston Downtown Park Conservancy, which brought PPS in to help facilitate two key goals: 1) To create a long-term vision guiding the park’s development that would ensure it became a major attraction in the region; 2)  To elicit ideas from the community and other stakeholders to identify uses and activities that would inform design and programming for the park.

As part of the process, PPS facilitated a “placemaking workshop” attended by neighborhood groups, individuals, city agencies, downtown workers, businesses, local youth, and property owners.  Following a virtual tour of successful parks around the world, the audience divided into small groups that explored and evaluated the site. These groups then presented their recommendations on what attractions would entice different people to a downtown park.

The process revealed a number of common themes that became central in planning for Discovery Green; firstly, to link the park to adjacent institutions and downtown areas. Discovery Green was made to reach out like a friendly octopus up the streets into downtown areas to pull people in. Further, efforts were made to make sure the park attracts diverse users throughout the day, week and year.  A broad variety of attractions continues to give residents many reasons to visit. The process also focused on providing multi-functional spaces that are flexible for different needs. Basic infrastructure for events, food service, art exhibits, and markets can accommodate the unanticipated ways that people may want to use the park in the future. A “Children First” strategy also remained a top priority throughout the process.Designing with families in mind sets a high standard for an environment everyone will enjoy in terms of safety, activity, and fun. The park was also designed with natural areas, shade, and water in mind. The powerful Texas sun was accounted for in the design of the park. Lastly, a variety of activities to attract different kinds of people was made available throughout the space. It’s not enough to have just one great destination in a great park - you need a number of them to create a truly lively place.

The staff who manage the park pay close attention to how different parts of the park function. The interactive Gateway fountain is admittedly the “on and off switch” of the park, attracting scores of families with children. The playground, mist tree and lakeside terraces, along with the art-lined promenade also draw large numbers of visitors. Yet the appeal of more passive areas in the park is not lost on families who come to watch boats on the lake and eat a picnic lunch, or downtown employees who find a shady, quiet spot by a garden to read on breaks from work.

According to the Discovery Green Conservancy, the park has served as a catalyst for $625 million in downtown development, since opening in 2008. The park has boosted business at the nearby convention center. But most importantly, Discovery Green has put downtown back on the map as place for Houstonians to play, relax, meet one another and even as a place to live. 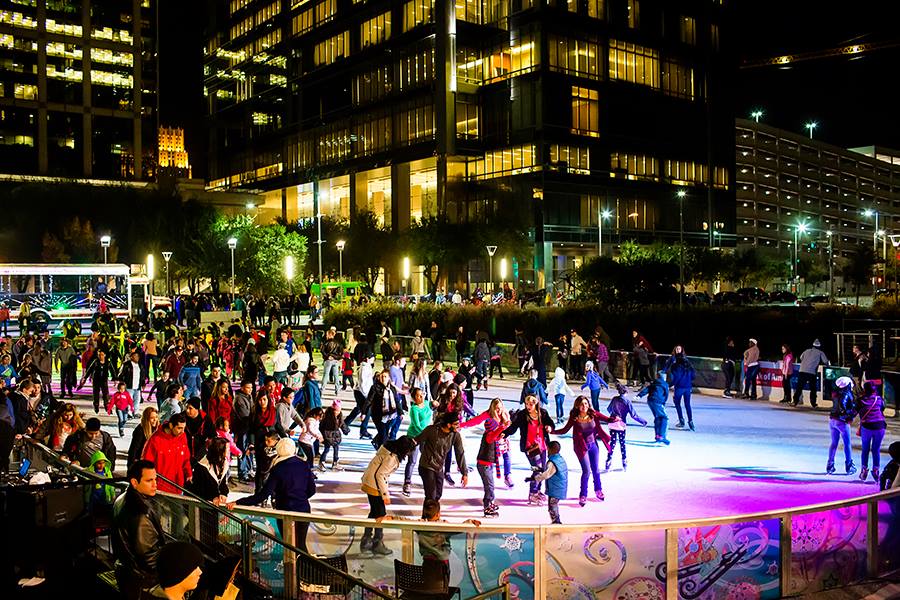 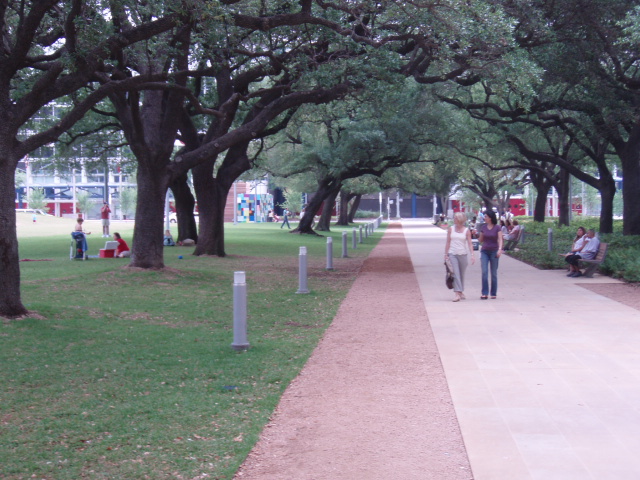 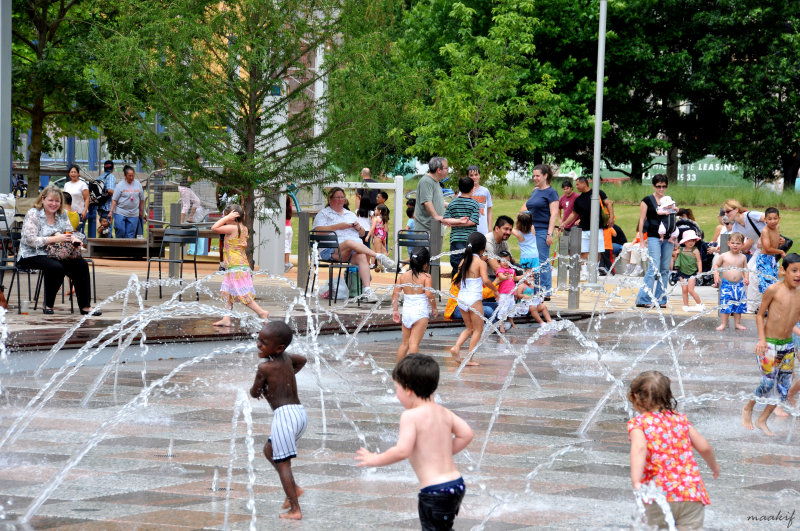 The Gateway Fountain continues to be one of the biggest attractions in the park. 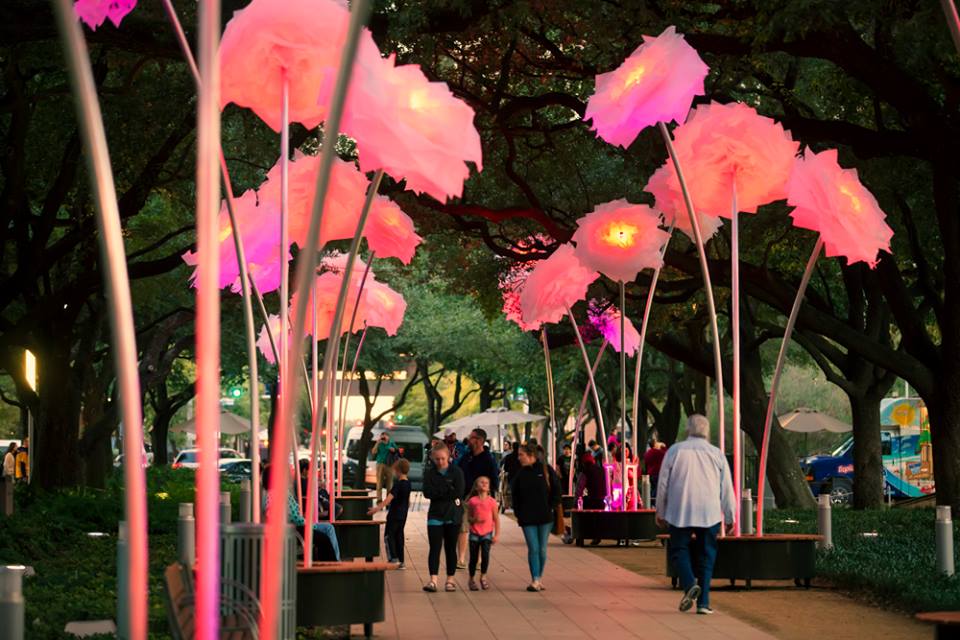 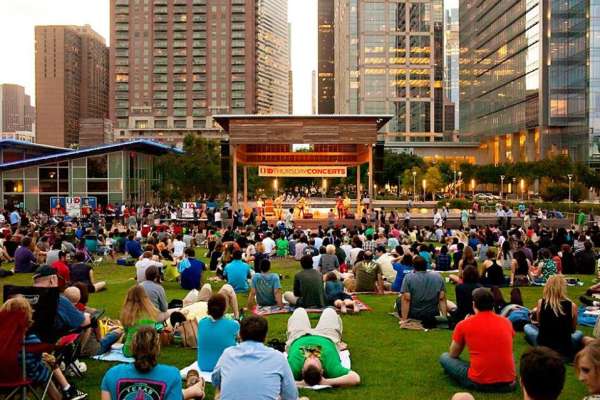