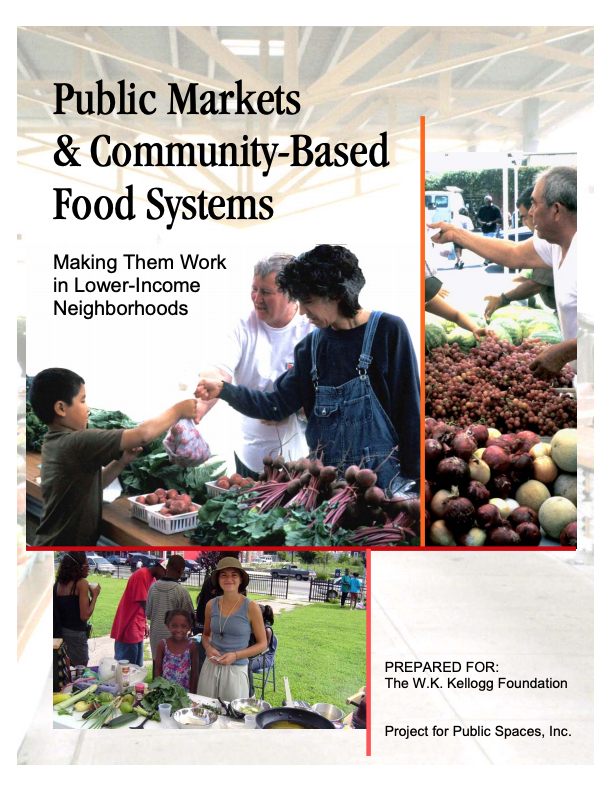 Food system advocates have been involved in markets for decades, the most notable early example being the Interfaith Hunger Coalition’s major role in starting farmers markets in Southern California in the late 1970’s and early 1980’s. More recently, though, a new generation of food security and local food systems advocates have turned to markets as a proactive measure to address the lack of food choice and poor access to fresh produce in low-income communities.Rather than simply providing emergency food relief, these groups are looking to markets to support and build community food systems and food security.

This report, supported by the W.K. Kellogg Foundation summarizes the results of research conducted to determine how markets undertaken by local food systems advocates can more effectively participate as a part of community-based food systems and address food security in lower-income communities, as well as attain long-term success and sustainability. It is a companion to research completed earlier this year for the Ford Foundation, “Public Markets as a Vehicle for Social Integration and Upward Mobility.” The Ford research is being used to shape a funding program to leverage public markets as a tool for community economic development in neighborhoods undergoing demographic transformation. Together these two reports identify many opportunities for public markets to serve as a positive force in building healthier communities and food systems.