The Power of Engaged Citizens in Oklahoma City

On a breezy winter day in late February, the city of Oklahoma City convened its local talents to brainstorm about the future of its emerging innovation district through a placemaking workshop facilitated by PPS. For over six months, PPS has been working on a joint initiative with the Brookings Institution to connect placemaking and innovation in Oklahoma City. This is one of two pilot projects for the Bass Initiative on Innovation and Placemaking, which focuses on exploring the critical link between innovation, quality places, and economic growth.

The emerging district is anchored by medical and research facilities including the OU Health Sciences Center, Oklahoma Medical Research Foundation (OMRF), Oklahoma Blood Institute, and a new G.E. research facility–one of just 7 such facilities throughout the world—is currently under construction. Adjacent to this area is a mashup of coffee shops, restaurants, retail, and residential mixed-use development in Automobile Alley. Taken together, these disparate parts of the geography have the assets on which to build a lively and robust innovation hub.

"There is a natural convergence between innovation and creating a sense of community, and in Oklahoma City PPS is focusing on the synergy between both," said PPS Executive Vice President Steve Davies. "In order to create vibrant public spaces, it is important to recognize the reasons that public spaces fail."

Oklahoma City, a primarily car-oriented city, has a hunger for walkable, amenity-rich, safe and accessible public spaces and streets. For example, the annual Open Streets event gathers a large crowd that walks, cycles, lingers, and spends the whole day outside. The Plaza District, which has become one of the city’s most well-loved destinations, is home to more than forty locally-owned businesses, and the area hosts an annual festival, which this year attracted nearly 20,000 people and over a hundred participating artists. In 2014, a renovated 1907 homestead was transformed into a coworking space, called The Barn, which provides another avenue for bringing the area’s bright and interactive community together.

The Oklahoma Health Center—at the heart of the innovation district—has inherited many of the same problems as its “urban renewal” peers: blank walls with no windows and no visible entrances from the streets, sprawling parking lots, giant building setbacks, sky bridges overhead and tunnels underground. Because of these factors, little to no activity takes place outside, and although the spaces are beautifully landscaped, most of them are either cut off from pedestrians by heavy traffic or hidden in between the buildings. In addition, all of them lack regular programming. “Right now, it is an area where people go to work, work very hard, and do very little play,” explains Carl Edwards, Chairman of Presbyterian Health Foundation.

“One of our challenges right now is that the Health Sciences Center is not conducive to chance interactions. You don’t just bump into people. The idea here is to encourage this type of behavior by connectedness and making places where people can meet and eat easily.” -  Dr. Stephen Prescott

Automobile Alley, a historic and hip downtown neighborhood, is also part of the innovation district, and has more life on the streets and more amenities. Nevertheless, the pedestrian counts are lower than you might expect—you would meet only about ten people in fifteen minutes on the street on an average day. What's more, Automobile Alley, with its restaurants, coffee shops, and arts facilities, is separated from the district's medical and research institutions by Interstate Highway 235, making the area seem much farther away than it actually is.

During our visit, the PPS team took note of the area’s huge demand for more active and mixed-use ground floors providing food, retail, and community-oriented opportunities. Currently, there are very few widely used public spaces and “third places,” which limits the potential for serendipitous social and professional interactions between people—a key feature of successful innovation districts. Based on these observations, the team selected eight sites where a “Lighter, Quicker, Cheaper” approach could kick start the creation of shared places that all Oklahomans can enjoy.

The placemaking workshop gathered a large cohort of enthusiastic innovation district employees, stakeholders, entrepreneurs, residents, students, and city officials who focused on how these eight sites could be transformed. From these community brainstorming sessions emerged ideas to connect and fix sidewalks, bring in food trucks and shared bike stations, and activate spaces with sports events and picnics. One group suggested reactivating graffiti alley this summer as a way to bridge the local bar and the future site of the Oklahoma Contemporary Arts Center, while another wanted to rediscover Stiles Park—home to the "Beacon of Hope" and the oldest park in the state—by adding new signage, hot dog and coffee carts, and inviting a local YMCA to teach yoga and tai chi during lunch hours.

Other groups looked at the edges of the innovation district and discussed ways to break down the barrier between the nearby residential neighborhood and the district. The region’s abundance of vacant lots and surface parking spurred ideas about inviting a farmers market or building new student housing that would jump start the commercial activities on the street. A few participants noted the area’s lack of meeting spaces and proposed an idea for transparent meeting cubes outdoors. All of the groups communicated clearly that they see this area’s potential in being a place for people, not cars.

While the project is still in the early stages, it is evident that the community’s enthusiasm for creating the district around place—to make it a more creative, innovative, and inclusive environment—will extend well beyond the innovation district. The city is starting with the petunias, and there is surely much more to come. Be sure to keep Oklahoma City on your placemaking radar! 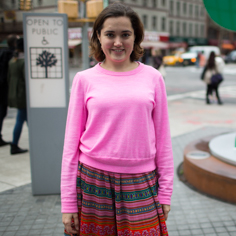 All Placemaking is Creative: How a Shared Focus on Place Builds Vibrant Destinations