This Must be the Place: Learning by Doing in Mexico City

Heart of the Community

“It turns out, what this place needed was a place.” – Guillermo Bernal, Lugares Públicos

When Guillermo Bernal and the staff of Lugares Públicos started working there, the Foro Lindbergh section of Parque México was in danger of being closed in with a fence—a misguided attempt by local officials to improve feelings of safety in the space. Fortunately, members of the community gathered in protest and successfully prevented the fence from being installed. They knew that the best way to make the Foro feel safer was to make it more accessible and more active, not less so. But, even after extensive renovations were completed in the following years, it was clear that the place wasn’t fully living up to its potential.

A large hardscape plaza with beautiful Art Deco pergolas, amphitheater, and fountain, the Foro has the potential to be a thriving hub of human activity in the center of a lush historic park. And sometimes it was—on days when the space was filled with soccer players and dog owners and kids, it could feel very lively and welcoming, but at other times it was empty and uninviting.

In early 2016, with support from the Southwest Airlines Heart of the Community program, the Lugares Públicos team (Guillermo and colleagues Ana Castilla and Clara Iglesias) set out to better understand the life of the Foro. They used a range of creative engagement activities to gather information from people in the Foro and to encourage them to offer ideas about how to improve and activate it. The team also immediately started testing new activities based on community members’ ideas, keeping careful track of what was working well and what wasn’t and analyzing how simultaneous activities supported or conflicted with each other.

“We spent nine months in the Foro focused on engagement with the community and programming exclusively,” commented Guillermo Bernal.“If we were going to eventually make a physical change to the space, we wanted to be sure that it was done to support activity—so we started with the activities.”

The team tested a broad range of programming ideas—yoga and dance classes, hula hooping, music and theater performances, yo-yo classes, storytelling, sports, chess, art exhibits and more. "As soon as we started organizing activities, we started hearing from people who wanted to help, which was really encouraging,” said Ana Castilla. As they learned more and more by talking with community members and through observation, they took on two slightly bigger projects: the plant clinic and the mobile library.

The plant clinic is the brainchild of Miguel Angel, a local horticulturalist who was inspired by the new energy he sensed in the Foro. Miguel approached the team with the idea that he could create a temporary space in the park to teach neighbors how to take better care of their houseplants. “I can’t imagine us ever having an idea like the plant clinic on our own,” said Ana Castilla. “Working with Miguel has really opened our eyes to how big the variety of activities can be in a public space.”

Most Saturdays and Sundays Miguel takes over two parking spots along the street adjacent to the Foro and sets up the plant clinic. The materials are simple–a temporary shade structure, a table, a bench, a patch of synthetic turf, plants and tools—but the atmosphere is definitely unique. Somehow passersby are not at all surprised to find a friendly neighbor ready to diagnose plant problems on the street by their park. In addition to drop-in consultations, Miguel also teaches small classes on plant care for children at the clinic, and now makes stops at other public spaces in Mexico City as well.

The mobile library was devised as a way to create a flexible and movable hub of activity within the Foro. Local designer Diego Cardenas created an ingenious, playful cart that stores books and games, and can be transported behind a bicycle. A staff person facilitates activities like storytelling and book or game lending. They also engage with visitors and manage the brightly colored “poofs” and movable furniture that help create a comfortable environment around the cart.

After some early successes with the mobile library in one part of the Foro, the team decided to evaluate how well it worked in other areas. They set up the library in three different places: under the pergolas, behind the fountain, and in front of the fountain. Using time-lapse photography and direct observation, they discovered that the area behind the fountain was clearly the most successful—more people visited the library there, they stayed longer, and it was more attractive to groups.

At the same time, the team began to recognize that the longer-term impact of their work in the Foro would be limited if they didn’t establish a more permanent presence in the space. Over the course of several months, working closely with Project for Public Spaces, they developed the vision for a dynamic destination in the same location where the mobile library had been most successful.

LEA—which stands for Lugar de Encuentro para Amigos, or, "Place to Meet Friends"—is a semi-permanent installation that includes a kiosk full of books and games surrounded by colorful tables, chairs, and benches, overseen by a staff person. This staff person is an essential part of LEA. Not only do they manage activities and serve as a friendly and welcoming presence, they are also the key point of contact for community members with new ideas about what can happen in the Foro.

The design of the kiosk, which features a pair of large book shelves that swing open for use, was partially inspired by the Garden Library in Levinsky Park (Tel Aviv, Israel). Like the Garden Library, the function and spirit of LEA is evident even when it is not open, and both feature nighttime lighting that makes each place a beacon in its park. The movable furniture was designed and manufactured by local entrepreneur Jorge Akele - with inspiration from both the classic Acapulco Chair and the modular trapezoid benches created by Friends of Congress Square Park in Portland, ME.

“All of our previous experience in the Foro was so helpful while we were designing LEA,” mentioned Clara Iglesias. “We were constantly testing the design against all of the uses and activities that we were observing in the space, and making sure that it would support them well.”

Currently open three days a week, LEA brims with activity throughout the day and into the evening. There are scheduled programs like storytelling, small performances, and classes, but the vast majority of the activity is self-directed. People of all ages gravitate to LEA. They pick out games and books to use, strike up conversations with neighbors and strangers, relax and watch the activity in the Foro, or enjoy a snack. It is somehow a buzzing hive and an oasis simultaneously.

Now that LEA is in place, community members are working hard on the expansion of the Amigos del Foro—a group founded to program, manage and support both LEA and Foro Lindbergh in general. “The opportunities for community programs at LEA and in the Foro are endless, and we are getting new suggestions all the time for creative things to do here,” said Yvonne Feiger, Amigos del Foro.

“We also want to make sure that this will continue to be a great place in the future, so we are actively seeking support from the entire community—citizens, businesses, NGOs, and government—to contribute to the life of the Foro,” she added. “We’ve already received hundreds of books from local stores, publishers, and neighbors, as well as pledges to teach and volunteer here, and we’re looking forward to many more partnerships and collaborations.”

When project partners and the community gathered to celebrate the inauguration of LEA, there was a palpable sense for everyone there that Foro Lindbergh and LEA are very special places. “At Southwest, we are all about connecting people; it’s at the heart of who we are,” mentioned Christine Ortega, Southwest Airlines.“As I witnessed people mingling and laughing, enjoying atole and churros as others danced and kicked footballs, I knew that LEA and Foro Lindbergh truly are the heart of that community and this will be a place to meet friends, and a place to make them for years to come. We are so proud to have supported these efforts.”

“We’ve learned so much, and had so much fun working with everyone in our community to bring the Foro to life, and to remind ourselves that it is ours,” said Guillermo Bernal. “And we discovered something really important about public space too—which is that great places need anchors, they need small areas that are full of activity and things to do. It turns out, what this place needed was a place.” 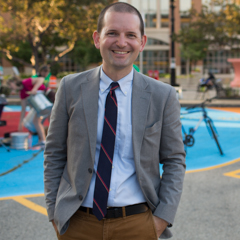 From Parking Lot to Hotspot in Milwaukee

Minneapolis: At the Corner of Arts and Justice