“Whose Streets, Our Streets”: Democracy Still Lives in Public Spaces

“When public space is eroded, our civic culture suffers, even our democracy.” - Richard Rodgers

Regardless of how you feel about the 2016 U.S. election results, one thing is clear: public spaces are doing their job. This past week protests arose in New York, Los Angeles, San Francisco, Oakland, Portland, Seattle, Chicago, in smaller cities around the U.S. such as Pittsburgh and Salt Lake City, and also around the world in cities like Berlin, London, and even Marrakech, in response to the election of Donald J. Trump who will become the nation’s 45th president next January. Despite the fact that many people do not support protests of this nature on either side, the reality is that whichever way the pendulum swung with this election, we would likely be looking at some sort of public outcry - and this is important. What protests like these do is demonstrate and reinforce the value of our public spaces, not only as a physical location in which to congregate, but as a space in which a collective voice can be developed and communicated.

Democracy depends on having a safe space—a commons—for citizens to come together. Here in New York City last Wednesday evening, people marched through and past almost every public space in the city that we speak about here at PPS. Within hours, people had organized on social media and called out to New Yorkers to join in a march to speak out against what they feel is a potential threat to civil and human rights. The march began in Union Square, and soon consumed major streets and avenues throughout the Flatiron district of Manhattan. The march continued on past Madison Square Park, and wove its way up through Herald Square until it eventually made its way to completely shut down 5th Avenue. These are places we hold dear to us here at PPS, and they served the city well as welcoming spaces throughout last week.

In some cities protests are not always welcome, and given the nature of this election, feathers indeed have been ruffled, but one thing is for sure - as the march moved through the streets and traffic came to a standstill, New York came alive. An incredibly diverse group of protesters high-fived cab drivers and onlookers as they marched their way along the streets. Tenants stood at their windows in awe, waving down at the massive crowd. Tourists on open-air buses jumped around with enthusiasm, cheering the protestors on. Despite being unable to move in traffic, commercial truck drivers honked their horns to show support and generate a mass applause. Workers leaving their offices for the day joined the crowd as they watched it pass. Many people cried with emotion once they saw the sheer number of people passing by.

Without public spaces, this kind of social interaction and organization would be very difficult. New York in particular has proven time and time again to be a model in terms of why its public spaces and services work for residents of this city. (1) NYC’s public transport system, despite its flaws, makes it easy for citizens to reach the city’s major public centers, such as Times Square, Union Square, Central Park, and Madison Square Park, quickly, easily, and quite cheaply; (2) New York’s public spaces are generally (and not without controversy) trusted sites of openness, familiarity, and accessibility and overall considered safe spaces for NYC’s diverse group of inhabitants - from the homeless to families, from market vendors to commuters; (3) New York’s public spaces are fluid and adaptable, accommodating a range of activities on an ongoing basis - from holiday markets to having chess players as permanent fixtures, from movies in the park to playgrounds - and protests are not excluded from this.

These protests reinforce some of PPS’s key concepts and agendas in regards to public space, such as “Streets as Places” and “Lighter, Quicker, Cheaper”, and remind us why these concepts are so important. Streets as Places tells us that streets are one of the few places where we routinely encounter people who are different from ourselves, and that they are critical public spaces that can lend richness to the social, civic, and economic fabric of our communities - we saw this with the protests in New York this past week when streets truly became a space for the people. Lighter, Quicker, Cheaper is best when it is spontaneous - we see this with an activation that is currently taking place at 14th Street/Union Square Subway station, not far from where protests originated on Wednesday. An artist known as Levee started an activity called “Subway Therapy” where she encouraged hopeless New Yorkers to share their feelings on sticky notes and post them on the subway tiles. The messages flood the walls of this subway tunnel each day, where they are easy to put up, and they are easily taken down at night, where the process then starts all over again in the morning. Quick, cheap, spontaneous, impactful.

Not only does this kind of activity show us that protests are crucial to our democracy, but the way we communicate about them is more powerful than ever. What we are seeing in cases like the “Subway Therapy” activity, is that surveillance, often commented upon as a deterrent in public space, is turning into a source of strength for protesters and their message, considering that we all can document activity ourselves. Eight years ago, when President Barack Obama was elected, most of us did not have an iPhone. Now, most of us can share an image or a video, as well as a location, instantly with our social media followers. Messages can spread quickly, just as can movements, events, and protests like these. However, while many actions of protest these days fall within the confines of social media, this past week showed us that old practices are alive and well, and, effective. When citizens gather to show solidarity and opposition, they are still choosing public spaces as their place to do just that.

Since Wednesday, protests have taken place across the country, not just in cities like New York, but in smaller cities and towns as well, have taken place every single day, with Saturday witnessing the biggest turnout yet. Through these protests, we are reminded that public space is much more to citizens than just a place to sit down, eat, or shop. In fact, public space is fundamentally not really about any of those things at all. In actuality, public space is crucial, and central, to our democracy. Public spaces are the center of democratic expression and protest, and they are catalysts for social and political change. We are seeing that in action, today. And now, just as we have seen many times in the past, they are not without conflict.

Protests remind us of the importance of public spaces, and the pressing issues that ignite them can often help to create public spaces of the best kind - active, meaningful, and inclusive places. People often ask us what we think are exemplary public spaces, as if there is one specific key for success. Truth be told, despite knowing that there are specific attributes that attract people to participate in public spaces, there is no “key.” It is up to the people to decide what is exemplary. The best places aren’t forced, but are often spontaneous, growing out of the most random and intimate activities, and we are seeing a perfect example of that right now as public spaces (and even online spaces) become canvases for art and activism. We might be hearing loud protests on the street here in New York, but we also are witnessing much quieter spaces and gestures of tolerance and healing, that are making a very strong impact on citizens of this city and around the country, as we communicate experiences through various channels.

This morning, Union Square again showed its more usual self. The protesters had gone. The chess players were back. The holiday market was being erected. Commuters were rushing their way up and down the subway stairs. But this is the beauty of public spaces - they can be transformed within moments, to whatever we need them to be, for us. 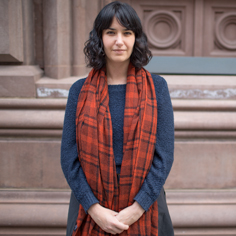