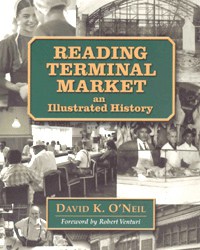 Loyal patrons, visitors to the city, and aficionados of public markets in general will be fascinated by the inside story told in The Reading Terminal Market: An Illustrated History, by David K. O’Neil (Camino Books, December 1, 2003). Enlivened by extensive photographs and memorabilia from the author’s large collection, this book brings to light the long, eventful story of the market.

From its early beginnings in the first open-air markets of colonial Philadelphia, Reading Terminal Market has been at the heart of the city’s commercial and social life, surviving to its present vibrant form by initiating and adapting to change over the years. The market became an innovator in cold storage at the end of the nineteenth century and revolutionized the industry by establishing new standards for the buying and selling of food. Over the next century, it responded nimbly to the advent of the telephone and the automobile, and dodged threats from the Reading Railroad, the Great Depression, World War II food rationing, the rise of the supermarket, and unionization.

The addition of the first Amish families to the market in 1980 coincided with a yearning for things made locally, and new merchant families from other countries brought a fresh vigor and variety. Finally, a determined campaign by stalwart merchants to preserve the market succeeded in restoring this beloved landmark to its central prominence in the life of Philadelphia once again. Reading Terminal Market’s robust survival to the present day — rounding out its remarkable three-hundred-year history — is a testament to the loyalty of both patrons and merchants, as well as to its own demonstrated resiliency.

Want to unlock the potential of public space in your community? Get in touch!
erosado@pps.org or 212.620.5660
Stay Connected
Our weekly newsletter offers placemaking news, opportunities, and more.
Thank you! Your submission has been received!
Oops! Something went wrong while submitting the form.
Support Our Work
Together we can create a world of community-powered public spaces.
Donate
Contact UsPrivacy Policy