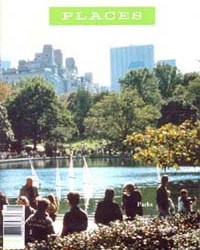 This stunning issue of Places: A Forum of Environmental Design is a must-have for anyone interested in the origins of city parks, their history, and their evolving role as catalysts of urban revitalization. Project for Public Spaces, the Pratt Institute, and the University of California, Berkeley collaborated to produce this special issue, which includes dozens of gorgeous photographs, illustrations, and the first comprehensive timeline of Central Park.

Contributors include Mayor Richard M. Daley of Chicago and former Bogota Mayor Enrique Peñalosa, both of whom spoke at Project for Public Spaces' Urban Parks Institute in New York in 2001. Also featured is Steve Coleman, the director of Washington Parks and People, whose tireless efforts on behalf of parks in Washington, DC, have transformed forgotten green spaces into important community places. The Central Park timeline, produced in collaboration with the Central Park Conservancy, is the first true chronology of Central Park, and includes dozens of photos of the park, historical and current.

Want to unlock the potential of public space in your community? Get in touch!
erosado@pps.org or 212.620.5660
Stay Connected
Our weekly newsletter offers placemaking news, opportunities, and more.
Thank you! Your submission has been received!
Oops! Something went wrong while submitting the form.
Support Our Work
Together we can create a world of community-powered public spaces.
Donate
Contact UsPrivacy Policy